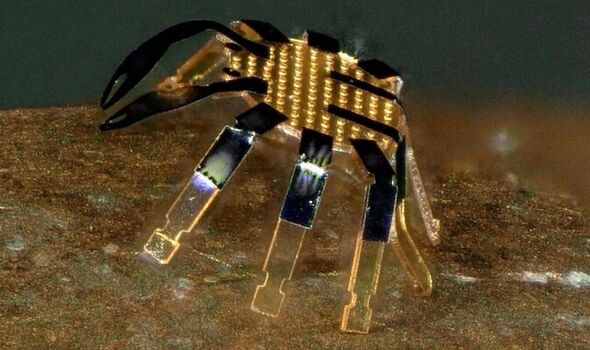 The crab-bot, which measures just half a millimetre across, is the smallest-ever remote-controlled robot. It was developed by engineers at Northwestern University who have previously made millimetre-sized robots resembling inchworms, crickets and beetles.

Scientists believe the technology could be used in the future to create micro-robots which can work in the human body.

Bioelectronics pioneer Professor John Rogers, who led the experimental work, said: “Robotics is an exciting field of research, and the development of microscale robots is a fun topic for academic exploration.

“You might imagine micro-robots as agents to repair or assemble small structures or machines in industry or as surgical assistants to clear clogged arteries, to stop internal bleeding or to eliminate cancerous tumours – all in minimally invasive procedures.”

Professor Yonggang Huang, who led the theoretical work, said: “Our technology enables a variety of controlled motion modalities and can walk with an average speed of half its body length per second.

“This is very challenging to achieve at such small scales for terrestrial robots.”

The robots are made from materials which change into a “remembered” shape when heated before returning to a “deformed” shape when cooled.

In the study, a laser was used to warm the devices causing their joints to expand.

When the laser was turned off their joints contracted prompting them to move sideways.

The speed and direction of the crab-bots could be controlled with the laser.

Prof Rogers said: “Because these structures are so tiny, the rate of cooling is very fast.

“In fact, reducing the sizes of these robots allows them to run faster.”

A flat and rigid version of the crab is made from silicon oxide before it is bonded to a stretched layer of rubber which when relaxed allows the crab to “pop up” into three-dimensional form.

DON’T MISS
Robot vacuum cleaner ESCAPES from Travelodge: ‘It could be anywhere!’
China creates robot ‘prosecutor’ to charge public with crimes
Robot technology for NHS operations could be groundbreaking

Prof Rogers said: “With these assembly techniques and materials concepts, we can build walking robots with almost any size or 3D shape.

“But the students felt inspired and amused by the sideways crawling motions of tiny crabs.”

The method was inspired by a child’s pop-up book, which should allow them to be mass produced.

The findings were published in the journal Science Robotics.