In 2018, William Pham started looking for a new keyboard after his $40 model broke. Now he owns eight custom mechanical keyboards, one of which costs more than $7500.

The custom mechanical keyboard market has exploded since the start of the pandemic as people across the world have poured time and money into personalised “builds”. 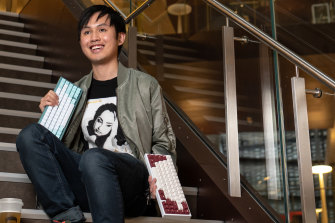 William Pham poses for a portrait with his unique keyboards.Credit:Flavio Brancaleone

“A keyboard is something you use every single day for several hours at a time,” says Pham. “It justifies the cost because having the nicest version of a keyboard helps you engage more with your experience, whether that be work, productivity or gaming.”

“A lot of people who found themselves working from home wanted a new hobby that they could write off as a business expense,” says Andrew Lu, a member of the UNSW Keyboard Society.

Akhilesh Sodemba decided to dive into the world of custom mechanical keyboards after spending lockdown working from home and watching one particular video by keyboard YouTuber Taeha Types. It is a one-minute recording of Taeha typing. At more than 2 million views, the satisfying ‘thock’ of the keys is cited as the catalyst for many hobbyists.

Every single aspect of a keyboard can be personalised: size, layout, colour, lettering, sound, feel and more. “It gets very expensive, very fast,” says Sodemba.

Each component is made to order, which means the hobby operates on what is essentially a crowdfunding model. 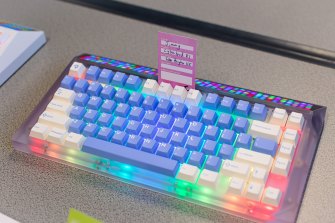 A $1000 mechanical keyboard design inspired by the Tesla Cybertruck.

For example, a designer will release concept art for a component, like a set of keycaps (the plastic covering that goes on each key). Interested enthusiasts can pre-order it and if enough people pay, the production process can begin.

This aligns the hobby with “hypebeast” interests like car customisation or sneaker collecting, in which product runs are limited, sell out quickly and can hit the resale market for thousands more than their retail price. Because of this “group-buy” model, consumers can wait more than a year to receive just one part of their keyboard, and often several years before they can even use their build.

Enthusiasts will often own three or more distinct keyboards.

“If I’m not feeling a board a certain day, I can just switch out to get a completely different experience. And I think that’s part of the beauty of mechanical keyboards,” Lu says.

“I have a board that’s made of plastic, it’s got a silencer in it. That’s the one I take out to not annoy people at the library.” 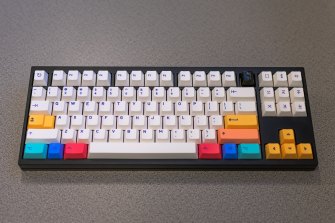 Mechanical keyboards can be customised with various colours and textures.

The hyper-personalised nature of each keyboard makes the hobby particularly conducive to community-building. “How someone builds their keyboards says a lot about them. And from there, it’s a way of getting to know people,” Lu says.

The community organises in-person meet-ups to showcase their builds. Attendees wear gloves when handling each other’s boards to avoid leaving an undesirable sheen on the keycaps, and chat admiringly about the time and effort spent on each build.

Anson Qiu says compared to other hype-based hobbies, the keyboard community is “a lot more welcoming and open … When you go to meet-ups, nobody’s discriminating against you for anything”. 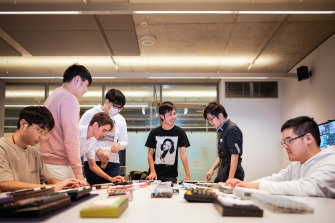 William Pham, centre, with some of his fellow members of the UTS Keyboard Society in Sydney.Credit:Flavio Brancaleone

Keyboard veteran Xuan Li says the scene used to be male and programmer-dominated but now “people from all walks of life are coming to the hobby because you can’t really go around these days without using a keyboard”.

“You can have a beautiful typing experience and sound profile with a cheap board,” says Jack Walsh.

But the hobby is not without its controversies.

As interest has grown, the group-buy model has not been able to keep up with demand.

Consequently, manufacturers from China have started stealing and reproducing designs from small artists. Their counterfeit and poor-quality products often appear on retail sites for a tenth of the original’s price.

One particularly popular set, GMK Nautilus, featured deep-blue keys with bright-yellow accents and aquatic motifs. Customers could pre-order the original set for $286, but before the manufacturer even began production, counterfeit versions started appearing on AliExpress for $27.

Zambumon, designer of the set and prominent keycap artist, told The Sydney Morning Herald and The Age the counterfeit market undermined designers.

“I like to do everything from designing the kits, preparing the product visualisations, getting quotes from manufacturers, setting up the spreadsheets with cost breakdowns … it’s also my responsibility to make sure the 3D renders match,” Zambumon says. 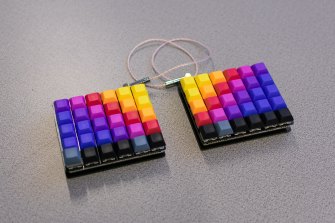 Keyboards can cost hundreds or even thousands of dollars.

“I’m proud of the work I do, so it’s hurtful when the product is cloned and someone else piggybacks off all that work.”

However, some find it difficult to condemn because clones offer a cheap alternative for beginners and can make a prohibitively expensive hobby more accessible.

“It’s very literally intellectual property theft, but the thing is they offer such a discounted price and an in-stock option,” Qiu says. “I personally think it’s pretty wrong, but it’s hard to blame them when there is such limited product.”

Pham is also the designer of popular pastel set GMK Noel, and while he understands why many dislike clones, he is largely impartial about counterfeits of his designs.

“My primary objective was never to make money. It was to create designs that people would like, and honestly, if there’s a product that will make the design more accessible for people, then go for it.” 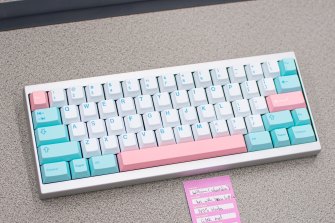 The keyboards come in a range of styles and colours.

Some enthusiasts believe counterfeits are a reaction to the time-consuming and expensive nature of group-buys. So Australian vendors are rethinking the way they sell components.

Ryan Castillo and Eric Song, from Sydney-based vendor Keyboard Treehouse, are working directly with manufacturers to circumvent group-buys by prioritising products that have finished production.

“When this hobby was young, the group-buy model was necessary because there weren’t enough people,” Eric says. “But now the hobby has grown to a point where you can reach the minimum order quantity and sell items in-stock.”

They are establishing one of the first Australian bricks-and-mortar stores for custom keyboard parts to make it easier for newcomers and seasoned hobbyists to create their perfect build.

“A keyboard is really how a lot of us in this day and age interact with the world. You don’t touch your computer, you touch your keyboard,” Walsh says. “So why not make it the best it can be?”