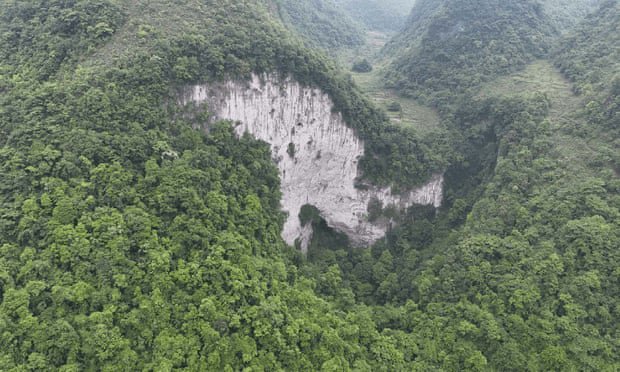 Researchers have discovered an ancient forest inside a massive 192 metre-deep sinkhole in China.

The secret range inside reportedly contains trees as tall as 40 metres and could may well include species that have not been studied before.

It measures at 192 metres deep, 304 metres in length and 149 metres in width, according to the Xinhua news agency.

Cave explorers came across the phenomenon near Ping’e village in Leye County of the Guangxi Zhuang Autonomous Region earlier this month.

Zhang Yuanhai, a senior engineer at the Institute of Karst Geology of the China Geological Survey, told the state news agency Xinhua the site had three caves in its walls and a well-preserved primitive forest at the bottom.

The experts hiked for several hours before reaching the base of the sinkhole and found three cave entrances.

Chen Lixin, who led the cave expedition team, told Xinhua that the dense undergrowth on its floor was as high as a person’s shoulders and that some of the ancient trees at the bottom were 120ft tall.

‘I wouldn’t be surprised to know that there are species found in these caves that have never been reported or described by science until now,’ said Mr Lixin.

China’s Guangxi region is known for its rivers, caves and towering karst formations that are prone to forming sinkholes.

Karst is an area of land made up of limestone and sinkholes are formed primarily by the dissolution of bedrock by groundwater.

In November 2019, Xinhua reported the discovery of a giant cluster of sinkholes in the Guangxi region. However, this is a rare one due to its depth and shape that’s just right for sunlight to filter in and sustain the forest.