If you suffer from a lack of confidence at work, a new study may encourage you to adjust your posture.

The wide-legged, chest-out pose has famously been used by politicians and celebrities including Theresa May, Elon Musk and Beyoncé. 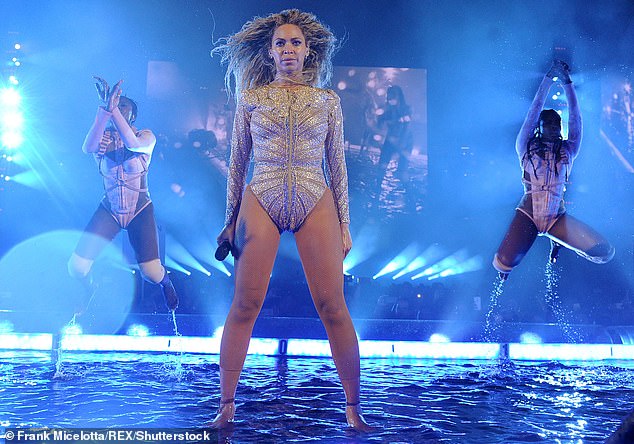 The rise of the power pose

The power pose rose to fame in 2012, when psychologist Professor Amy Cuddy presented a Ted Talk on how body language shapes who we are.

She listed several poses to use in the workplace to give you confidence and boost your performance at work:

The Mr Clean: Tightly crossing your arms over your chest and rolling your shoulders back is the perfect power pose for speaking confidently in a meeting

The Loomer: Placing your hands face down on a table at a meeting is a good pose for closing a deal, Professor Cuddy claims

The ‘Obama’: Those looking to pitch an idea at the workplace should put their feet up on the table and cross their hands behind their head

The Performer: Professor Cuddy suggests people should put their hands above their head with their legs shoulder-width apart before heading into an interview to boost their confidence levels

The Wonder Woman: Standing on spread legs and holding your hips while raising your chin can reportedly help you chat with your boss

As the name suggests, power poses involve standing in a posture of dominance, even when we don’t feel confident.

‘Examples of high-power poses would be standing or sitting in a very expansive way, taking up a lot of space,’ the researchers explained in an accompanying article on The Conversation.

‘A low-power pose would be crossing your legs and folding your arms while standing, or bowing your head and putting your hands on your lap while seated.’

Previous studies have provided mixed results on whether the power pose actually influences your confidence or not.

To settle the debate, researchers from the Martin Luther University Halle-Wittenberg, the University of Bamberg and The Ohio State University evaluated data from 130 experiments with a total of 10,000 participants.

‘Early research on body positions suggested that engaging in certain nonverbal displays can lead to changes in self-report, behavioural, and physiological dependent variables,’ the researchers wrote in their study, published in Psychological Bulletin.

‘Still, there has been intense criticism regarding the replicability of these effects.

‘To determine what effects are valid, we conducted a meta-analytic review on body position studies.’

The analysis revealed a link between power posing and a more positive self-perception, as well as behaviour.

For example, participants were found to be more persistent with tasks when adopting a power pose.

This was the case for both men and women, as well as across different age groups.

Previous studies have suggested that adopting a power pose makes you feel more powerful by lowering the stress-indicating hormone cortisol, and raising your testosterone levels.

However, the researchers did not find any link between the power pose and hormone levels.

‘The findings on the physiological effects of power posing are not robust and have not been replicated by independent research groups,’ said Professor Astrid Schütz, an author of the study.

The researchers also highlighted some limitations in previous studies on power posing.

Most of the studies did not involved a control group, and instead, participants were simply asked to adopt a power pose or a more submissive, hunched posture.

Robert Körner, an author of the study, explained: ‘Because of that, it is not possible to say where the differences come from, as only one of the two poses may have an effect.’

Meanwhile, almost all of the studies were carried out in Western, Educated, Industrialised, Rich and Democratic (WEIRD) societies.

This means it’s unclear whether the findings can be applied to other cultures, according to the team.

The power pose rose to fame in 2012, when social psychologist Professor Amy Cuddy presented a Ted Talk on how our body language shapes who we are.

She listed several poses to use in the workplace to give you confidence and boost your performance at work.

This includes The ‘Obama’ – putting your feet up on the table and crossing your hands behind your head while pitching ideas – and the Wonder Woman – standing with spread legs and holding your hips while chatting to your boss.

Attractive women bosses are considered less truthful and trustworthy by both sexes, research has found.

In tests, hundreds of male and female participants said they thought a pretty female boss was less likely to be honest.

They were also considered more deserving of being fired than a less attractive counterpart.

Good looks are often thought to be advantageous in life, whether when it comes to getting served in shops or pubs or being more likely to succeed at a job interview, and even the likelihood you are found guilty in court.

But when it comes to the most senior roles, however, attractive women were considered to be more deceitful.

It seems that any woman who shatters the glass ceiling is perceived to have used underhand methods to get there, the research suggests.