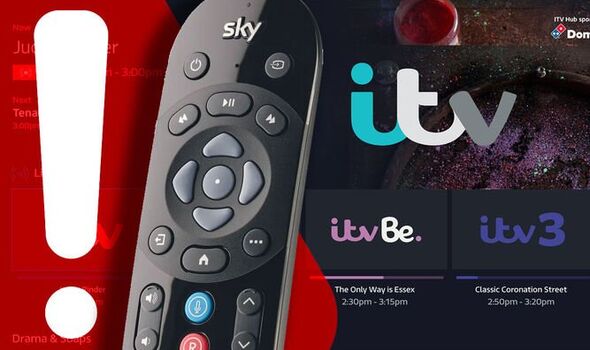 ITV is making some big changes to its streaming service and it’s bad news for anyone who watches content via platforms like Sky Q and Virgin TV 360. That’s because ITV plans to reduce the number of shows that will be available outside of its ITV Hub streaming app – that means there will be less choice on some set-top boxes.

Sky has launched an unmissable bargain offering its award-winning Sky Q box bundled with speedy broadband at a very low price. This bundle gives access to over 200 channels, the Sky Q box to pause and rewind live telly and stream Netflix and Prime Video, all powered by average broadband speeds of some 36Mbps. Of course, you can add paid-for channels, Sky Sports, Sky Cinema and Netflix at checkout too

Although Sky has a number of on-demand apps, including BBC iPlayer, preinstalled on its Sky Q devices, there’s no ITV Hub app available right now. When the change takes effect, it means Sky Q viewers will no longer be able to access dozens of new series from ITV that are being broadcast online ahead of a general release. Virgin Media customers are a little luckier as TV 360 boxes do have access to ITV Hub, but viewers will need to start loading up the app whenever they want to watch a show from ITV – rather than easily finding it from the main menu.

The overhaul is designed to boost the number of people watching via the ITV Hub app, which will be replaced with a flashier new service – ITV X – later this year. ITV will also add thousands more hours of content to its streaming service, rising from 4,000 to 6,000 hours of boxsets to watch for free on the advert-supported service.

Explaining why it’s decided to remove on-demand content from Sky Q boxes, a spokesperson for ITV said: “ITV has taken the strategic decision to reduce the availability of pre-transmission drama drops and box sets outside of its own streaming services, such as on Sky and Virgin, where we cannot serve and monetise dynamic advertising.

“Therefore, this decision does not reduce existing revenues. Over time and with the launch of ITVX we anticipate that we will see this viewing move to ITV’s streaming services and be more effectively monetised. The transitional impact of this decision has been the overriding driver of a 7 percent reduction in total streaming hours in the quarter, across all platforms.”

Although Sky Q users appear to be getting less content, the changes won’t affect customers of Sky Glass or those who have a Stream Puck device in their homes as these gadgets both include an ITV Hub app.

It’s currently unclear exactly what shows or boxsets will become unavailable outside of the ITV Hub app, but Express.co.uk has approached ITV, Sky and Virgin Media for comment on this shift.

As we mentioned earlier, there are even more changes coming to ITV’s online services later this year with the launch of ITV X. The new streaming app will replace the ITV Hub platform with new shows debuting every week – a bit like Netflix.

These complete boxsets will be available to stream months before their broadcast on terrestrial channels. This decision is designed to ensure the upgrade from ITV Hub to ITV X is “a move from a catch-up service to a full-blown streaming service,” ITV told advertisers.

ITV X will be available to watch for free although there also be an optional paid-for subscription tier that will remove all adverts when watching shows and films on-demand. It’s thought ITV X will arrive before the FIFA World Cup later this year.