Chinese Australians are being shown misinformation and unauthorised political advertising on dominant social network WeChat, during a federal election campaign where major parties are courting their votes in key marginal seats.

WeChat has an estimated 690,000 daily users in Australia. The platform, owned by Chinese internet behemoth Tencent, claims it does not allow political advertising, but even a brief search reveals the widespread existence of what appear to be political ads and misinformation. 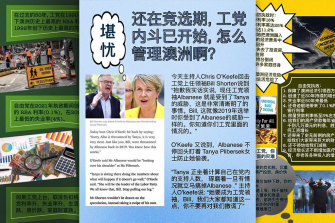 Images circulating on WeChat, the very popular app among the Chinese Australian community, during the 2022 election.

Much of the discussion on the platform is similar to that on Western sites such as Facebook, with different sections of the Chinese community making the case for their preferred candidates.

However, in some private chat groups, which can count hundreds of members, images are circulating with false claims about candidates and political parties. Misinformation experts believe the posts may have been shared by the proxies of candidates in seats where votes from Chinese Australians may determine the result.

“All these candidates have their proxies in those groups, actively disseminating material, and unless you’re in those groups it’s a black box,” said Fergus Ryan, a senior analyst at the Australian Strategic Policy Institute’s (ASPI) cyber policy centre.

One image, viewed by The Sydney Morning Herald and The Age, taps into the anxieties of conservative Christian voters to suggest that if Labor wins power, it will impose the will of white, politically correct people to force women to unfairly compete against trans women in sports such as swimming. Other images, some of which were first reported on by The Guardian, falsely claim the party will resurrect its dumped plan to abolish negative gearing or metaphorically “rain blood” on the economy.

There are also gushing profiles of politicians and parties, with one that resembles an advertorial depicting Labor on the cusp of victory, poised to make it easier for hardworking migrants to get permanent residency.

Major party politicians have fully authorised ads or images displaying their how to vote cards in Chinese on WeChat pages, including communications minister Paul Fletcher and Labor leader Anthony Albanese.

The news site did not respond to a request for comment.

Even political ads that are fully authorised appear to breach WeChat’s terms of use. Its rules prohibit “promotional political content (including election-related paid advertising) on the platform,” said a spokesman from WeChat’s parent company Tencent. “We are also committed to providing the best user experience by minimising the dissemination of false news and misinformation.”

ASPI’s Ryan is sceptical of how seriously WeChat is about enforcing its rules. “It’s clearly something they’re not devoting any resources to policing,” he said. “That’s just really strange to me because there is clearly a lot of paid advertising going on, including advertorials.”

WeChat offers a mix of services that has made it ubiquitous in China and its diasporas. Users can publicly post, privately message or call each other, watch short-form videos, play games and pay businesses or individuals. Third-party news sites on WeChat are read at least sometimes by more than 80 per cent of Chinese Australians surveyed by the Lowy Institute.

WeChat even has a red envelope function that allows users to gift currency to others. Based on the Chinese hongbao tradition, users can either directly send a digital red envelope of money to another person, or release a limited number of red envelopes to a group chat and watch members scramble to claim them.

Elena Yi-Ching Ho, an analyst at anti-misinformation group Reset Australia, said she had observed a vibrant conversation on WeChat about the Australian election. “We see WeChat groups sharing a diversity of news sources, with robust public discourse fuelled by group members reminding one another to only share reliable sources of information,” she said.

While it has a broader scope than Western apps, WeChat’s content can be limited. Chinese government authorities analyse and track user activity, often observing trends and censoring issues the Chinese Communist Party views as controversial. The app has been accused of suppressing posts and search results for the Tiananmen Square Massacre as well as anti-Russia posts about the war in Ukraine.

Tencent, the listed tech giant that makes WeChat, has previously said its actions are guided by local laws as well as regulations in China. WeChat, which is available in the West, is interoperable with but distinct from a similar app available in China called Weixin.

WeChat also offers less transparency than Instagram, Facebook and YouTube, which report on the political ads running on their websites in near real time. “A lack of oversight and transparency is making WeChat a platform increasingly exposed to disinformation, including some groups rife with misinformation and unauthorised political ads distorting election narratives,” Ho said.

Evan Ekin-Smyth, a spokesman for the Australian Electoral Commission, said its staff had met with WeChat via video call several times leading up to the 2022 federal election and previously taken action to fix unauthorised content on the platform. On Twitter the commission suggested it had discussed WeChat’s ban on political ads with the tech giant.

Labor did not directly answer questions about the misinformation it faced on WeChat or its own strategies on the platform, with a spokesman instead saying it wanted to communicate with all Australians and WeChat offered a way to do that. Coalition campaign headquarters was contacted for comment.