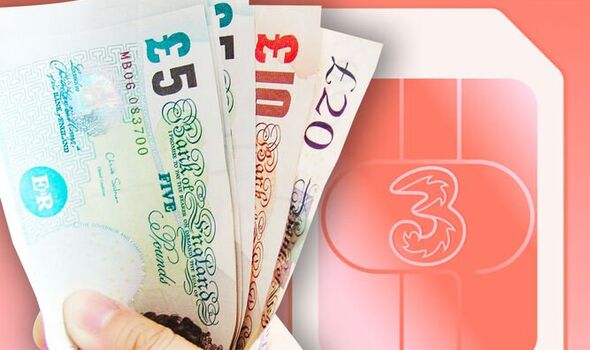 Fancy £100 to spend on whatever takes your fancy? Three Mobile is offering customers just that thanks to a new SIM deal that includes a pre-paid Mastercard. This piece of plastic can be used in most retailers across the UK so you’re not tied to one store such as Amazon.

Three is offering customers thinking of switching over a big incentive. If you move to Three on its SIM-only Unlimited plan during you’ll be rewarded with a £100 free gift card. Not only that, but you’ll enjoy half price line rental for six months. This slashes the usual £22 per month price to £11.

Along with that free cash to spend, the UK network is also promising half-price calls, texts and unlimited data for the first six months of the deal. This cuts the price of Three’s Unlimited SIM to just £11 per month with things then rising to £22 for the remainder of the 24-month contract.

Another bonus of this deal is that it includes access to 5G data which is capable of whizzing files and films to compatible phones at speeds in excess of 300Mbps.

If you think this sounds enticing you can find the Three deal here.

However, before you sign on the dotted line, there is another offer that’s definitely worth considering.

SMARTY, which is powered by Three, has a swathe of SIM deals starting from just £6 per month. However, right now there’s also an epic offer which includes 100GB of data for £12 per month.

SMARTY has unlimited data to just £20 per month. This SIM also includes endless calls and texts plus full access to 5G

SMARTY, which is actually owned by Three, has just launched a pretty epic discount that includes a generous 100GB for just £12 per month. There are also unlimited calls and text plus you also get that fast 5G data access thrown in for good measure.

One of the benefits of using SMARTY is that the firm doesn’t require you to sign up for a long-term deal which means you can leave at any time. Unlike most of the other big providers including EE, Sky and Vodafone, there are also no extra charges for using your device in Europe with SMARTY confirming that it’s not bringing back the dreaded roaming fees.

You can see full details about the SMARTY deal here.

All of the added benefits from SMARTY recently helped this Three-powered network pick up a top award from the consumer experts at Which?.

This firm was the highest-rated by customers with it earning a coveted five stars out of five for value for money.

Speaking about the latest news, Natalie Hitchins, Which? Head of Home Products and Services, said: “The vast majority of mobile users are with one of the Big Four providers, but our research suggests consumers could save money during the cost of living crisis and get better service by switching to one of the networks challenging their dominance.

“Anyone looking for a reliable carrier that offers a flexible contract and good value for money should consider one of the virtual networks, who continue to outperform the Big Four year after year.”