Martian frost coating the Red Planet is ‘DIRTY’ and mixed with dust grains despite appearing as a ghostly silver to the naked eye, NASA scientists reveal

Ghostly blue white frost covering the surface of Mars is ‘dirty’ and mixed with dust grains, study reveals, keeping much of it hidden to the naked eye.

A team from NASA’s Jet Propulsion Laboratory in California used data from the Mars Odyssey orbiter, with visible light and heat sensitive cameras to look at the frost.

When scientists looked at images of the Martian surface taken with the NASA orbiter in visible light, the kind seen by the human eye, they saw ghostly, blue-white morning frost illuminated by the rising sun.

However, when they looked using the orbiter’s heat-sensitive camera, the frost appeared more widely, and in areas where none was visible in visible light waves.

They were looking at frost that forms overnight and is made of carbon dioxide, also known as dry ice, but couldn’t explain why so much was invisible to the naked eye.

This new study suggests they were seeing evidence of  ‘dirty frost’ – dry ice frost mixed with fine grains of dust that obscured it in visible light but not in infrared.

This dirty frost phenomenon is likely the cause of dark streaks stretching 3,300 feet down the side of Martian slopes, produced by dust avalanches that slowly reshape mountainsides across the planet over millions of years. 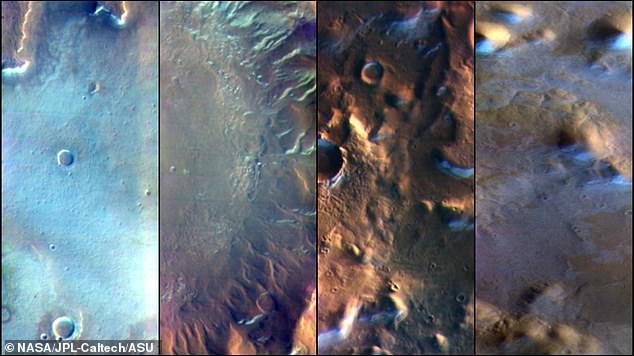 Martian surface frost, made up largely of carbon dioxide, appears blueish-white in these images from the Thermal Emission Imaging System (THEMIS) camera aboard NASA’s 2001 Odyssey orbiter. THEMIS takes images in both visible light and heat-sensitive infrared

Launched in 2001, Odyssey is NASA’s longest-lived Mars mission and carries the Thermal Emission Imaging System (THEMIS), an infrared, or temperature-sensitive, camera that provides a one-of-a-kind view of the Martian surface.

Odyssey’s current orbit provides a unique look at the planet at 7 am local Mars time, according to the JPL team, which is useful for studying morning frost.

‘Odyssey’s morning orbit produces spectacular pictures,’ said Sylvain Piqueux of NASA’s Jet Propulsion Laboratory in Southern California, who led the paper. ‘We can see the long shadows of sunrise as they stretch across the surface.’

Because Mars has so little atmosphere, the sun quickly warms frost that builds up overnight. Instead of melting, dry ice vaporizes into the atmosphere within minutes. 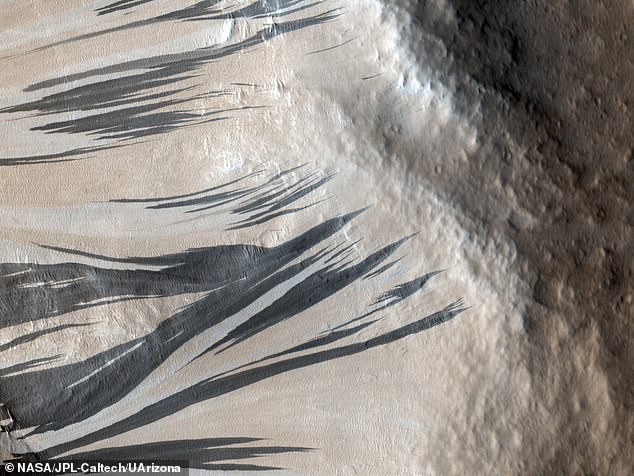 These dark streaks, also known as “slope streaks,” resulted from dust avalanches in an area of Mars called Acheron Fossae 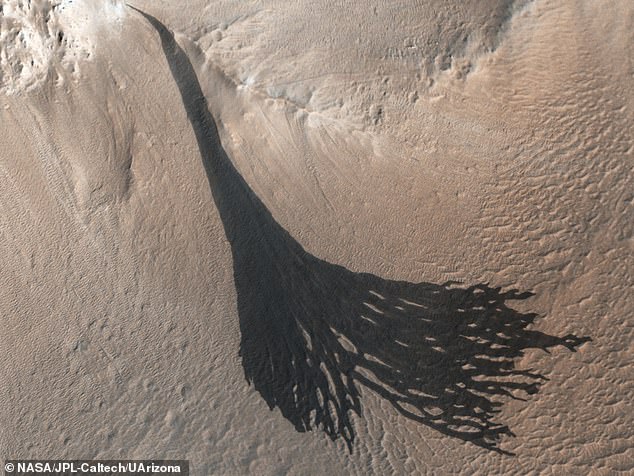 This dirty frost phenomenon is likely the cause of these dark streaks stretching 3,300 feet down the side of Martian slopes, produced by dust avalanches that slowly reshape mountainsides across the planet over millions of years.

Lucas Lange, a JPL intern first noticed the cold-temperature signature of frost in many places where it couldn’t be seen on the surface, appearing less than the width of a human hair below the Martian surface.

‘Our first thought was ice could be buried there,’ Lange said.

‘Dry ice is plentiful near Mars’ poles, but we were looking closer to the equator of the planet, where it’s generally too warm for dry ice frost to form.’

Suggesting dust permeates the dry ice also seems to explain dusty avalanches across the planet – seen as streaks of dark patches on mountainsides.

Scientists think these dust avalanches probably look something like a ground-hugging river of dust releasing a trail of fluffy material behind.

As the dust travels downhill over several hours, it exposes streaks of darker material underneath.

These dark streaks are not the same as a better-documented variety called recurring slope lineae, which recur in the same places, season after season, for weeks at a time.

Once thought to result from briny water slowly seeping from mountainsides, recurring slope lineae are now believed to result from flows of dry sand or dust.

Mapping the slopes streaks for their recent study, the authors found they tend to appear in places with morning frost.

The researchers propose the streaks resulted from the vaporizing frost creating just enough pressure to loosen the dust grains, causing an avalanche.

‘Every time we send a mission to Mars, we discover exotic new processes,’ said Chris Edwards, a paper co-author at Northern Arizona University in Flagstaff.

‘We don’t have anything exactly like a slope streak on Earth. You have to think beyond your experiences on Earth to understand Mars.’

The findings have been published in the journal JGR Planets.

How important is the presence of liquid water?

It is now widely believed that Mars holds a reasonably large volume of water.

However, the surface of the planet is so cold, this water exists only as ice.

In order for life to exist on a planet, many scientists believe it is essential for the world to possess liquid water.

Ever since technology has enabled mankind to gaze at Mars in detail, humans have been looking for indications that there was water on the red planet.

Did water used to flow on the surface of Mars?

The Mariner 9 mission revealed clues of water erosion in river beds and canyons, as well as evidence of weather fronts and fogs on Mars in 1971.

Later missions from the Viking orbiters, which first launched in 1975, revealed yet more details about how water flowed on the surface and carved valleys.

It was claimed the gullies seen on the surface of the planet had to have been formed by flowing water.

Scientists cited the debris and mud deposits left behind as evidence for moving water existing at some point in the history of the red planet.

However, the formation of these gullies has been hotly debated throughout the ensuing years.

Proof of ice in geological samples from Mars

Spirit and Opportunity, the twin rovers, found evidence of the presence of water enclosed in rock in 2007, when one of Spirit’s wheels broke and gorged a piece of stone.

Analysis of the silica-rich layer discovered in the scratch suggested it formed in the presence of liquid water.

In 2008, the Phoenix lander was gathering geological samples, and they disappeared after a few days.

Scientists thought these were pieces of ice. This assessment was confirmed when the lander later detected water vapour in a sample.

In 2012, Curiosity was meandering over an ancient martian seabed when it examined a number of rocks that were exposed to liquid water billions of years ago.

In 2012, Curiosity (pictured) was meandering over an ancient martian seabed when it examined a number of rocks that were exposed to liquid water billions of years ago

These dark streaks populate the areas of Mars with a sharp incline.

Researchers speculated that these may have been caused by the intermittent flow of liquid water down steep banks on the planet.

In June 2013, Curiosity found powerful evidence that water good enough to drink once flowed on Mars. In September of the same year, the first scoop of soil analysed by Curiosity revealed that fine materials on the surface of the planet contain two per cent water by weight.

In 2015, Nasa claimed to have discovered the first evidence of liquid water on Mars in the present day.

The space agency said that its Mars Reconnaissance Orbiter (MRO) provided the strongest evidence yet that liquid water flows intermittently on present-day Mars.

In 2017, Nasa issued another statement rebuking its initial findings.

Features known as recurring slope lineae (RSL) were first identified in 2011 (pictured). These dark streaks populate the areas of Mars with a sharp incline. Researchers speculated that these may have been caused by the intermittent flow of liquid water

It said the dark features that run down steep inclines on the red planet were actually granular flows, where grains of sand and dust slip downhill to make dark streaks, rather than the ground being darkened by seeping water.

Images from the MRO revealed the streaks only exist on slopes steep enough for dry grains to descend the way they do on faces of active dunes.

Also in 2017, scientists provided the best estimates for water on Mars, claiming it once had more liquid H2O than the Arctic Ocean – and the planet kept these oceans for more than 1.5 billion years.

The findings suggest there was ample time and water for life on Mars to thrive, but over the last 3.7 billion years the red planet has lost 87 per cent of its water – leaving the surface barren and dry.

In a study published in the journal Science, ESO researchers have now discovered the first concrete evidence for liquid water on Mars.