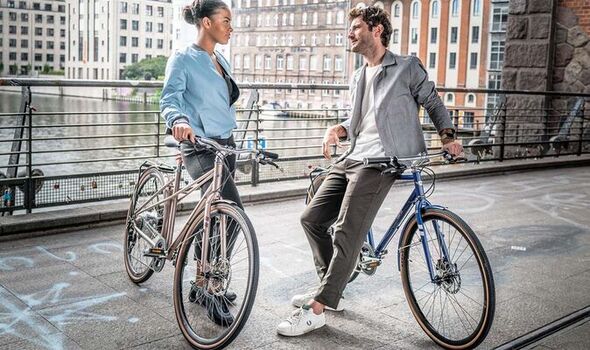 The company behind the world-famous Mini Cooper cars has released four new electric bikes that use revolutionary tech to last longer. Cooper Bikes, the two-wheel arm of the Cooper Car Company, has unveiled a range of electric bikes that in theory can offer you unlimited range at an affordable price. The four new eBikes, which all have an eye-catching retro look, are fitted with a Zehus Gen2 electric bike drivetrain and rear hub motor which is capable of regenerative braking.

If you’ve heard this term before, then that’s because it’s used to refer to the Kinetic Energy Recovery System (KERS) that Formula One cars use.

This system which was pioneered in the world’s premier class of motor racing helps power up a battery with the energy created during braking.

The eBikes from Cooper Bikes use similar technology, with the battery getting charged while braking, going downhill or when pedalling backwards.

Explaining how KERS works on its eBikes, Cooper Bikes explains: “Established in Formula 1 racing cars, Cooper e-bikes use similar technology for energy recovery. If desired, the motor recuperates while braking or going downhill and charges the battery. This creates a hybrid drive and extends the range.

“How does that work exactly? If you continuously pedal backwards while riding, the KERS (Kinetic Energy Recovery System) is activated. The system slows the bike a little and charges the battery to gain more range. The engine brake is perfect downhill or when approaching traffic lights. Highly efficient and without wasting energy.”

It’s a fascinating feature that sets the eBikes produced by Cooper Bikes apart from those made by its rivals.

If this high-tech feature interests you, but you’re worried you’ll have to break the bank to take advantage of it then we have some good news.

Prices for the electric two-wheelers Cooper Bikes offers are very competitive, with the starting price being €2,399 (which is just over £2,020).

For those that like a classic look, the eBikes from Cooper Bikes are virtually indistinguishable from a regular pedal bike.

So unlike other electric bikes you won’t find any thick parts of the frame where a battery pack is housed, all of the four eBikes Cooper Bikes offer have a traditional, retro design.

The bikes, which are limited to speeds up to 15.5mph in Europe, can be charged in less than three hours. And while the KERS tech means in theory you could get unlimited range, its advertised range is 60km.

The machines from the Mini Cooper designers come with four different riding modes and also have a handy security feature which effectively acts as an immobiliser when activated.

One thing the Cooper Bikes models are lacking is a fitted display unit. Instead, the eBikes connect to a smartphone app which you use to tinker with the settings on your electric bike.