‘Otherworldly’ images that capture what looks like a flying saucer crashed on Mars have been revealed by NASA.

But although the scene may appear sci-fi like — as one engineer described it — the wreckage shown actually belongs to humans, not an alien civilisation.

The colour pictures were taken by the US space agency’s Ingenuity helicopter and capture the landing equipment used during its arrival with the Perseverance rover in February last year.

A parachute and the cone-shaped backshell that protected the car-sized vehicle in space, as well as during its fiery descent toward the Martian surface, can be seen in incredible detail. 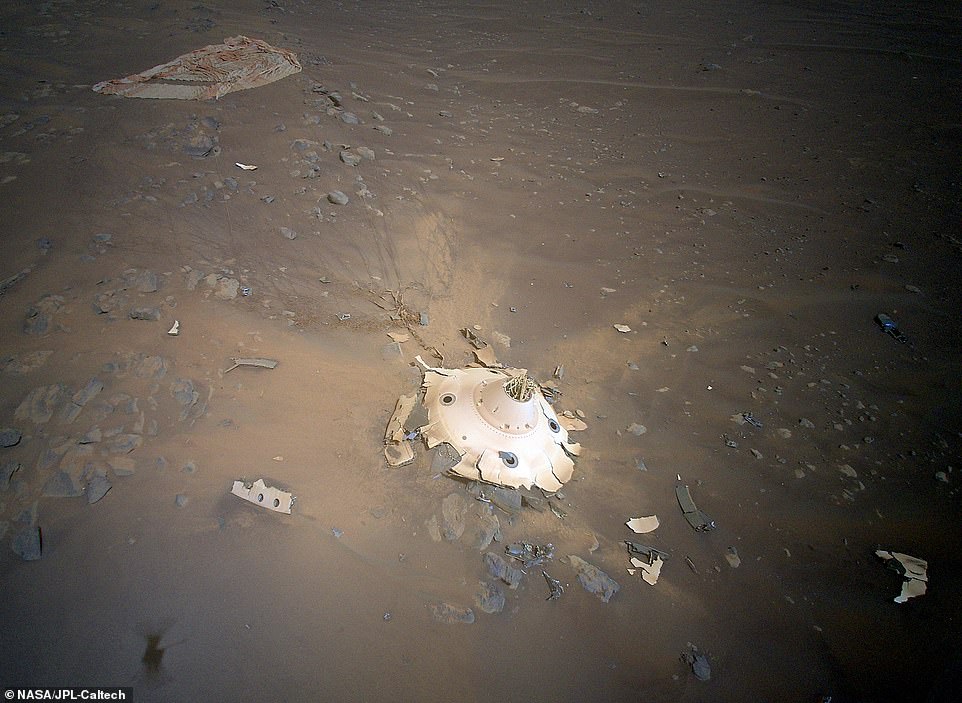 Fascinating: ‘Otherworldly’ images that capture what looks like a flying saucer crashed on Mars have been revealed by NASA 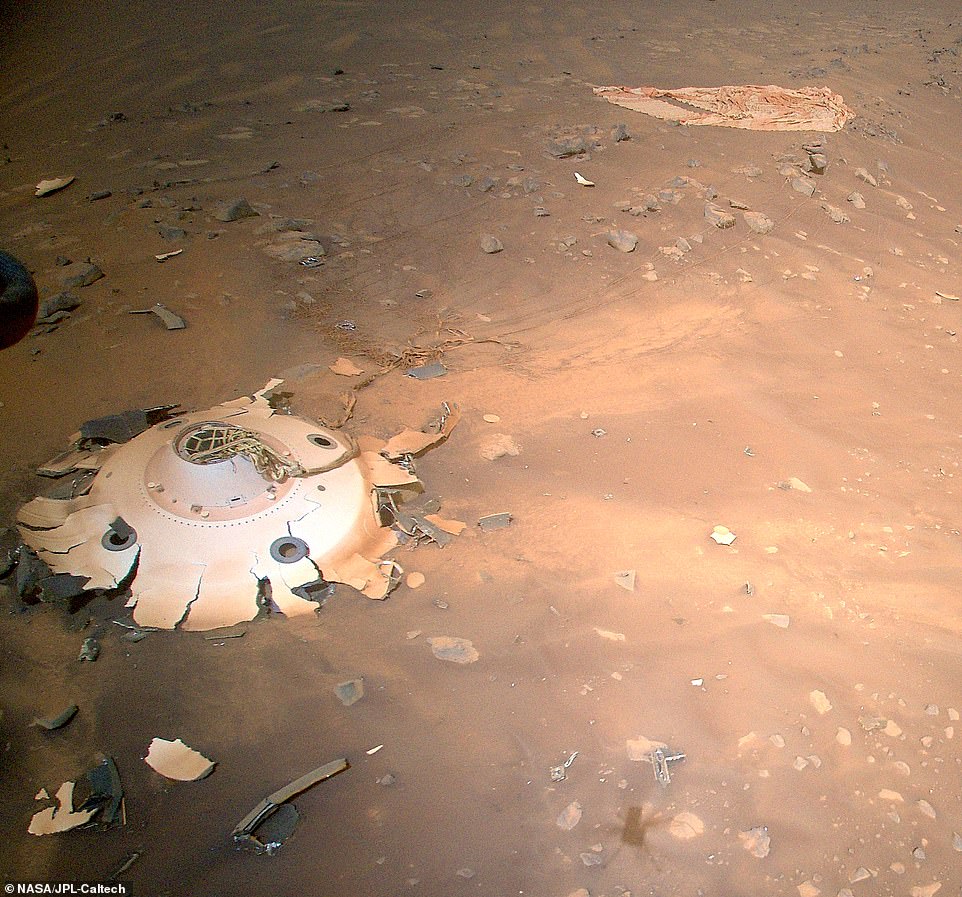 But although the scene may appear sci-fi like — as one engineer described it — the wreckage shown actually belongs to humans, not an alien civilisation. The colour pictures were taken by the US space agency’s Ingenuity helicopter and capture the landing equipment used during its arrival with the Perseverance rover in February last year

Flight one: April 19, 2021 with a vertical takeoff up to 9.8ft, stationary hover and a landing

Flight two: April 22, 2021 with a vertical takeoff up to 16ft, hover, then shift westward for 14ft before returning and landing

Flight three: April 25, 2021 with a vertical takeoff up to 16ft, hover, shift northwards for 328ft at an airspeed of 2 m/s before returning to land

Flight nine: July 5, 2021 with a record length of 2,050ft southwest over a prospective research location at 16ft per second.

Flight eleven: August 5, 2021 by flying 1,250ft for 130 seconds in preparation for a series of reconnaissance missions for the Perseverance rover.

Flight thirteen: September 5, 2021 by flying 690ft for 160.5 seconds, climbing 26ft over one particular ridgeline over the ‘South Seitah’ region of Mars.

Flight fifteen: November 6, 2021 by flying back towards its original landing site. It flew for a total of 128 seconds at an estimated 11mph.

Flight seventeen: December 5, 2021 by flying back toward the Wright Brothers Field at the Octavia E. Butler landing site. It flew 614ft (187m) for a total of 117 seconds at an estimated 6mph.

Ingenuity snapped the aerial images during its 26th flight on the Red Planet, which took place on the one-year anniversary of its iconic first flight. The ‘marscopter’ was originally designed to do just five flights.

‘There’s definitely a sci-fi element to it,’ Ian Clark, an engineer who worked on Perseverance’s parachute system, said of the photographs, speaking to the NY Times.

‘It exudes otherworldly, doesn’t it?’

He added: ‘They say a picture’s worth 1,000 words, but it’s also worth an infinite amount of engineering understanding.’

Entry, descent, and landing on Mars is fast-paced and stressful, not only for the engineers back on Earth, but also for the vehicle enduring the gravitational forces, high temperatures, and other extremes that come with entering Mars’ atmosphere at nearly 12,500 mph (20,000 kph).

The parachute and backshell were previously imaged from a distance by the Perseverance rover.

But those collected by the rotorcraft — from an aerial perspective and closer — provide more detail.

NASA said the images have the potential to help ensure safer landings for future spacecraft such as the Mars Sample Return Lander, which is part of a multimission campaign that would bring Perseverance’s samples of Martian rocks, atmosphere, and sediment back to Earth for detailed analysis.

‘Perseverance had the best-documented Mars landing in history, with cameras showing everything from parachute inflation to touchdown,’ Clark said.

‘If they either reinforce that our systems worked as we think they worked or provide even one dataset of engineering information we can use for Mars Sample Return planning, it will be amazing.

‘And if not, the pictures are still phenomenal and inspiring.’

In the images of the upright backshell and the debris field that resulted from it impacting the surface at about 78 mph (126 kph), the backshell’s protective coating appears to have remained intact during Mars atmospheric entry.

Many of the 80 high-strength suspension lines connecting the backshell to the parachute are visible and also appear intact.

Spread out and covered in dust, only about a third of the orange-and-white parachute – at 70.5 feet (21.5 meters) wide, it was the biggest ever deployed on Mars – can be seen, but the canopy shows no signs of damage from the supersonic airflow during inflation.

Several weeks of analysis will be needed for a more final verdict.

The Ingenuity rotorcraft, which is just 18 inches tall, was originally designed to fly five times on Mars but has now carried out 27 trips across the Red Planet.

It made history in April 2021 when it completed the first powered controlled flight on any planet other than Earth.

The helicopter is currently acting as a scout for the Perseverance rover, which is searching for ancient microbial life on the Red Planet, and will continue testing its own capabilities to support the design of future Mars air vehicles.

Flying at 26 feet (8 metres) above ground level, Ingenuity travelled 630 feet (192 metres) to the southeast and took its first picture.

The rotorcraft next headed southwest and then northwest, taking images at pre-planned locations along the route.

Once it had collected 10 images in its flash memory, Ingenuity headed west 246 feet (75 metres) and landed.

The total distance covered was 1,181 feet (360 metres). With the completion of Flight 26, the rotorcraft has now logged more than 49 minutes aloft and travelled 3.9 miles (6.2 kilometres).

‘To get the shots we needed, Ingenuity did a lot of maneuvering, but we were confident because there was complicated maneuvering on flights 10, 12, and 13,’ said Håvard Grip, chief pilot of Ingenuity at JPL.

‘Our landing spot set us up nicely to image an area of interest for the Perseverance science team on Flight 27, near ‘Séítah’ ridge.’

The new area of operations in Jezero Crater’s dry river delta marks a dramatic departure from the modest, relatively flat terrain Ingenuity had been flying over since its first flight.

Several miles wide, the fan-shaped delta formed where an ancient river spilled into the lake that once filled Jezero Crater.

Rising more than 130 feet (40 meters) above the crater floor and filled with jagged cliffs, angled surfaces, projecting boulders, and sand-filled pockets, the delta promises to hold numerous geologic revelations — perhaps even proof that microscopic life existed on Mars billions of years ago.

Upon reaching the delta, Ingenuity’s first orders may be to help determine which of two dry river channels Perseverance should climb to reach the top of the delta.

Along with route-planning assistance, data provided by the helicopter will help the Perseverance team assess potential science targets.

Ingenuity may even be called upon to image geologic features too far afield for the rover to reach or to scout landing zones and sites on the surface where sample caches could be deposited for the Mars Sample Return program.

Ingenuity arrived on Mars attached to the belly of Perseverance, which touched down on Mars on February 18, 2021 after a nearly seven-month journey through space.

Perseverance made its first test drive on Mars on March 4, and on April 4, NASA confirmed that Ingenuity had been dropped to the surface of Mars from Perseverance’s ‘belly’ in preparation for its historic flight.

NASA also said on April 5 that Ingenuity had survived its first night on the Martian surface — a major milestone because surface temperatures can plunge as low as -130°F (-90°C).

The helicopter made its first flight on April 19, 2021, making history as the first powered controlled flight on any planet other than Earth.

In a nod to this feat, Ingenuity carries a small amount of fabric that covered one of the wings of the Wright brothers’ aircraft, known as the Flyer, during the first powered, controlled flight on Earth in 1903.

For the first flight, Ingenuity took off, climbed to about 10 feet (3 metres) above the ground, hovered in the air briefly, completed a turn and then landed after 39.1 seconds.