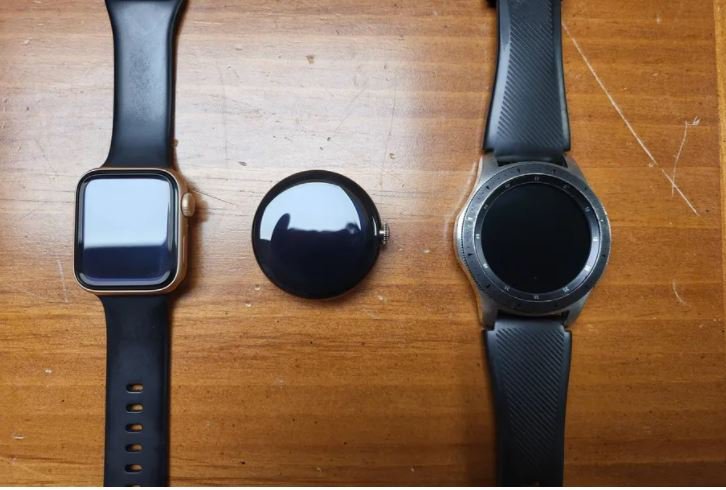 Google’s long-awaited answer to the Apple Watch may be revealed in the next couple of months if rumours are to be believed.

The search giant is believed to be working on a smartwatch of its own that would pair up with its Pixel line of smartphones.

Dubbed the ‘Pixel Watch’, a new set of leaked images suggest it’s pretty much a done deal and could be revealed as soon as the Google I/O conference slated for early next month.

The images of the device were unveiled by Android Central, who apparently received them after a reader found a Pixel Watch prototype in a restaurant.

They show a rounded timepiece with a rotating crown flanked by a pair of buttons.

Meanwhile, the underside of the watch has a black and metal frame around an oval health-tracking sensor. According to Android Central, the bottom of the watch ‘looks metallic but feels like it’s coated with glass.’

Unfortuantely, the site says it wasn’t able to boot up the watch and see how it worked. When they tried, they got nothing more than Google’s ‘G’ logo on the small circular screen.

The watch apparently came into the hands of a Reddit user called u/tagtech414 who wishes to remain anonymous. The Redditor says that his bartending friend found the watch at the restaurant where he works, and held onto it for ‘a few weeks.’

When nobody came to claim it, the friend gave the watch to u/tagtech414 because he’s a self-labeled ‘tech nerd.’

Google’s decision to make a smartwatch to rival the Apple Watch seems like a no brainer ever since it acquired Fitbit for £1.5 billion last year.

‘This deal has always been about devices, not data, and we’ve been clear since the beginning that we will protect Fitbit users’ privacy,’ Rick Osterloh, Google’s senior vice president for devices and services, said at the time.