If the election were held on Snapchat, Labor would win. It is the only party, aside from a solitary One Nation candidate, to put up advertisements on the social media platform during this campaign, according to the platform’s political ad library.

The message from Labor’s 15 ads, styled as though they could be an invite to a trendy university party, is aimed straight at the voters aged between 18 and 26 who will see the highly targeted images. “Moved out of home?” one asks. “Don’t forget to update your AEC details online.” Labor’s brand is absent, save for a tiny authorisation as required by electoral law, suggesting it is aiming at young voters who lean left but take a dim view of party politics.

The ads are a fractional part of the election campaign but they point to parties’ determination to win votes online, their willingness to be tricky in the digital arena, and the sophisticated targeting techniques at play.

So, how is the digital campaign being run? And who do the parties hope to sway? 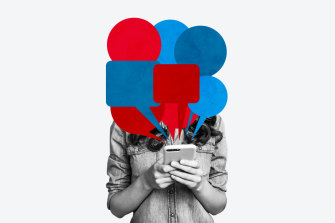 More than half of Generation Z say social media is their main source of news.

That’s anyone born since 1997. But social media’s importance is not limited to young people. Ten per cent of those aged 75 and older rely on it to stay informed, according to a University of Canberra report last year.

Snapchat claims more than 7 million users in Australia. The video social network TikTok does not disclose users in Australia, but a report from a marketing agency in 2021 suggested marketers could reach more than 7 million people on the platform. The same document, from social management tool Hootsuite and marketing company We Are Social, pegs Facebook’s ad-reach at 16 million, YouTube’s at 20.5 million, Instagram’s at 11 million and Twitter’s at 2.9 million. In a population of 26 million, that’s good coverage. 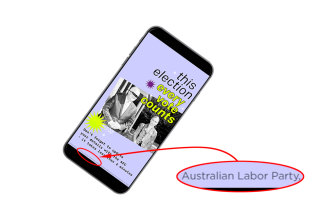 Twitter, which is favoured by many current affairs consumers, and TikTok, which has a younger audience, do not allow political advertising. There, posts have to be engaging enough to reach users on their own, which means that funny, impassioned or (sadly) negative content tends to get the most views.

In broad terms, candidates use each platform for a different purpose. Twitter is used for the cut and thrust of political discussion. Snapchat and TikTok are used to reach the youngest audiences. Facebook, photo and video-sharing platform Instagram and YouTube, for videos, command huge audiences and substantial ad expenditure across demographics, although Instagram’s engaged audience is viewed as younger than that of Facebook. Ads that come up in search results on Google, or on other websites sites where Google sells the advertising space, will be especially important in the last days of the campaign as voters search for their local candidates and try to make a decision. On each platform parties will tailor ads to voters in specific electorates and to specific demographics – which is the targeted nature of advertising on social media.

More people registered for this election in a single day than any other before. Social media was a key reason why.

Australian Electoral Commissioner Tom Rogers called the decision by 214,000 people to enrol to vote – most of them aged between 18 and 24 – “an unmitigated success for the election and Australian democracy”. It takes the total enrolment rate to 96 per cent.

Several platforms, including Snapchat and Twitter, partnered with the AEC to encourage enrolments. The electoral commission spent $173,000 on Facebook and Instagram in the week to April 16, leading up to the close of enrolments on April 18, too.

Left-leaning parties are the likely beneficiary of surging enrolments. In 2019, large-scale polling by the Australian National University’s Australian Election Study found Labor and the Greens claimed 81 per cent of the vote among people aged between 18 and 24. That is more than double the 31 per cent share of the vote they received from those aged over 65. 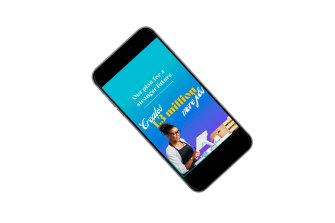 Parties do not just want enrolments. Some ads encourage voters to apply for a postal vote direct from the party.

This election, Labor and the Coalition have both set up sites through which voters can request a postal ballot. This has triggered a warning about the practice from the electoral commission, which pointedly notes that political parties do not have to comply with privacy law. That means they could use the sites, which voters are directed to by social media ads, to add to their databases on voters.

“People have a right to know what they’re doing with their personal data,” Rogers says.

Where political parties cannot persuade voters to enrol or request a postal ballot directly online, they are trying to convince Australians to back them on election day in May. Posts are varied, but data from Facebook’s CrowdTangle analysis tool suggests fringe politicians and controversial posts generate the most engagement from readers. On April 19, for example, One Nation leader Pauline Hanson had the highest “share of voice”, a measure of engagement with Australian political pages on Facebook, at 10 per cent. She was followed by Liberal National Party Senator Gerard Rennick, whose overwhelming focus is on attacking COVID-19 vaccine mandates, at 8 per cent. The Prime Minister was third, at 7 per cent.

Meanwhile, individual candidates tend to use social media advertising in a different way to political parties, focusing on local issues and introducing themselves to voters. Below is a Google ad for the independent candidate for Wentworth, Allegra Spender.

Australia does not have laws that prevent false or misleading claims in federal election campaigns.

Only South Australia and the ACT have a law prohibiting the publication of false factual claims, as opposed to statements of opinion, and that does not apply to federal elections. The only guard rail at a federal level is that Australians cannot be misled about their voting rights – but everything else is unprotected.

That has consequences. A Liberal National Party ad that ran on YouTube in Queensland showed Labor leader Anthony Albanese saying, “What we’ve said is we don’t have a plan.” Albanese did say those words at a press conference in mid-April but the quote is out of context. He was, in fact, saying that Labor did not have a plan to raise the JobSeeker payment rate in its first budget, but could look at it in future budgets as long as it was fiscally responsible in the context of Australia’s large national debt.

Labor has made similarly misleading or tendentious claims, with some posts suggesting the government plans to make cuts to Medicare (it has ruled that out) and put the aged pension on a debit card that restricts purchases and allows only minimal cash withdrawals (again, ruled out).

The Liberal Party has already moved to counter some of the scare campaigns attacking them with a site promoted on social media called Labor Lies that addresses claims about cuts to services under the Morrison government.

Ad data shows how some of the millions of dollars parties receive are being spent.

Figures from Nielsen, the audience analysis firm, show that traditional advertising is still a major part of political parties’ spending.

But social media advertising is harder to measure and likely undercounted in the figures. A separate ad library report produced by Meta, the owner of Facebook and Instagram, showed the United Australia Party spent $97,691 on its ads in the seven days to April 18. It was followed by Anthony Albanese’s page on $71,185 and the Labor Party on $71,047.