Jupiter’s ice-filled moon Europa could have water near it’s surface, scientists believe, meaning it could be home to extraterrestrial life

The uncanny resemblance between features on Europa’s frozen surface and a landform in Greenland suggest the icy-moon may be capable of harboring life.

Europa is the fourth largest moon of Jupiter and is thought to have a substantial liquid water ocean under its 15 mile thick crust of ice.

A team from Stanford University explored similarities between double ridges on the surface of Europa, and smaller versions of the features found under Greenland’s ice.

Ice-penetrating radar data revealed that refreezing of liquid subsurface water drove the formation of Greenland’s double ridge, and if Europa’s formed the same way, it could signal the presence of large amounts of liquid water near the surface.

If Europa’s features form the same way, this could signal the presence of copious amounts of liquid water – a key ingredient for life – near the surface of the thick outer ice shell of Jupiter’s fourth largest moon. 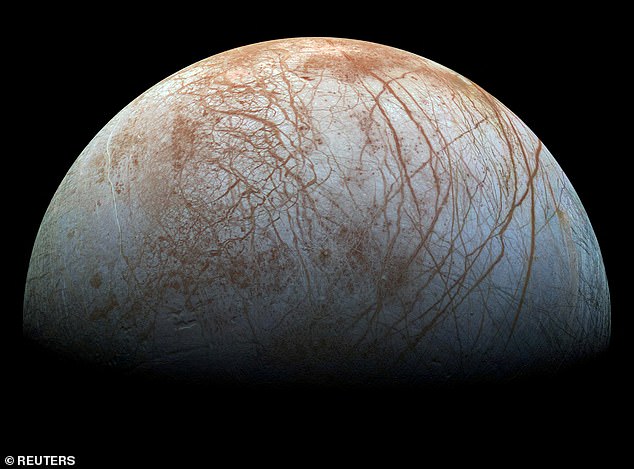 The study explored similarities between the elongated landforms, called double ridges, that are linear, with two peaks and a central trough between them, and slicing through one looks like a capital letter ‘M’.

‘If you sliced through one and looked at the cross section, it would look a bit like the capital letter M,’ said Stanford University geophysicist Riley Culberg, lead author of the study published in the journal Nature Communications.

In the search for extraterrestrial life, Europa has attracted attention as one of the locales in our solar system that may be habitable, perhaps by microbes, owing to a global saltwater ocean detected deep beneath its ice shell.

Innumerable water pockets closer to the surface would represent a second potential habitat for organisms. 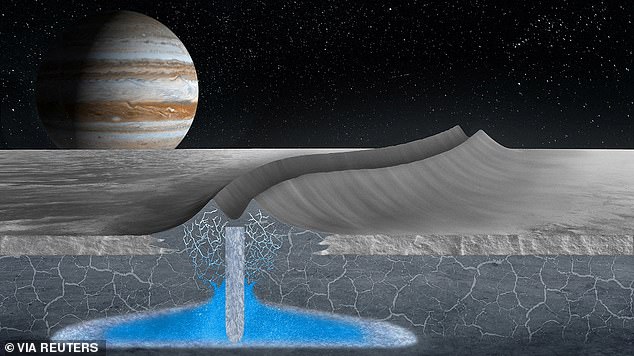 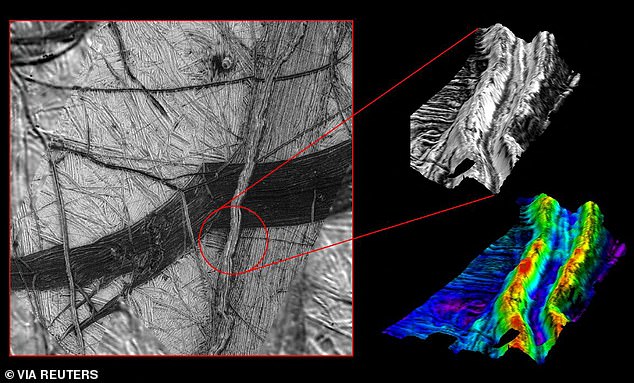 Ice-penetrating radar data revealed that refreezing of liquid subsurface water drove the formation of Greenland’s double ridge, and if Europa’s formed the same way, it could signal the presence of large amounts of liquid water near the surface

‘The presence of liquid water in the ice shell would suggest that exchange between the ocean and ice shell is common, which could be important for chemical cycling that would help support life,’ Culberg said.

‘Shallow water in particular also means there might be easier targets for future space missions to image or sample that could at least preserve evidence of life without having to fully access the deep ocean.’

WHAT ARE DOUBLE RIDGES FOUND IN ICE FORMATIONS?

Jupiter’s moon Europa is a prime candidate for extraterrestrial habitability in our solar system.

Double ridges are the most common surface feature on Europa and occur across every sector of the moon, but their formation is poorly understood.

Current hypotheses provide competing and incomplete mechanisms for the development of their distinct morphology.

A team from Stanford analyzed a double ridge in Northwest Greenland with the same gravity-scaled geometry as those found on Europa.

‘Using surface elevation and radar sounding data, we show that this double ridge was formed by successive refreezing, pressurization, and fracture of a shallow water sill within the ice sheet,’ they said.

If the same process is responsible for Europa’s double ridges, the study suggests that shallow liquid water is spatially and temporally ubiquitous across Europa’s ice shell.

This increases the possibility of finding evidence of life in these water pools.

NASA’s robotic Europa Clipper spacecraft is scheduled for a 2024 launch to further investigate whether this moon possesses conditions suitable for life.

The shallow depth of Europa’s potential water pockets – perhaps within six-tenths of a mile of the surface – also would place them near chemicals vital for the formation of life that may exist on its surface.

With a diameter of 1,940 miles, Europa is the fourth-largest of Jupiter’s 79 known moons, a bit smaller than Earth’s moon but bigger than the dwarf planet Pluto.

Europa’s ocean may contain double the water of those on Earth. Life first emerged on Earth as marine microbes.

Europa’s double ridges, sometimes extending hundreds miles (km), generally are around 490-650 feet tall, with the peaks about three- to six-tenths of a mile apart.

Scientists have debated how they formed. Culberg was struck by their resemblance to a landform he knew from northwestern Greenland, with peaks about 6.5 feet tall, separated by about 160 feet and extending about a half mile.

‘The Greenland double ridge feature formed from the successive refreezing, pressurization and fracture of a near-surface water pocket,’ Culberg said.

We see two ridges, rather than one, because the shallow water pocket was also split in two by a fracture filled with refrozen water.’

The water pocket in Greenland was about 50 feet below the surface, likely less than 33 feet thick and about a mile (1.6 km) wide.

If the same process spawned Europa’s many double ridges, each associated water pocket could boast a volume similar to Lake Erie, one of North America’s Great Lakes.

‘Between having two potential habitats and the fact that double ridges – and the near-surface water bodies they may imply – are among the most common features on Europa’s surface, it makes this moon a very exciting candidate for habitability indeed,’ study co-author Dustin Schroeder added. 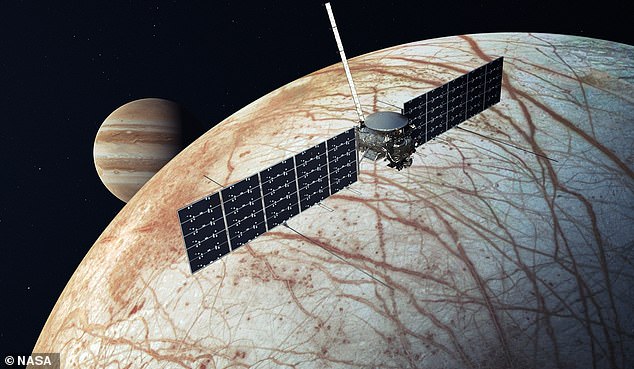 The study explored similarities between the elongated landforms, called double ridges, that are linear, with two peaks and a central trough between them, and slicing through one looks like a capital letter ‘M’

Much of that study area occurs on land, where the flow of ice sheets is subject to complex hydrology – such as dynamic subglacial lakes, surface melt ponds and seasonal drainage conduits – that contributes to uncertainty in sea-level predictions.

Because a land-based subsurface is so different from Europa’s subsurface ocean of liquid water, the study co-authors were surprised when they noticed that formations that streak the icy moon looked extremely similar to a minor feature on the surface of the Greenland ice sheet – an ice sheet that the group has studied in detail.

‘We were working on something totally different related to climate change and its impact on the surface of Greenland when we saw these tiny double ridges – and we were able to see the ridges go from ‘not formed’ to ‘formed,’ ‘ Schroeder said. 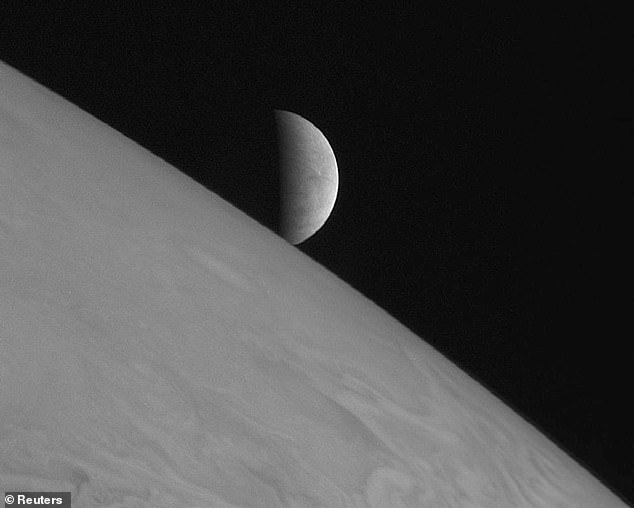 If Europa’s features form the same way, this could signal the presence of copious amounts of liquid water – a key ingredient for life – near the surface of the thick outer ice shell of Jupiter’s fourth largest moon

The co-authors said their explanation for how the double ridges form is so complex, they couldn’t have conceived it without the analog on Earth.

‘The mechanism we put forward in this paper would have been almost too audacious and complicated to propose without seeing it happen in Greenland,’ Schroeder said.

The findings equip researchers with a radar signature for quickly detecting this process of double ridge formation using ice-penetrating radar, which is among the instruments currently planned for exploring Europa from space.

‘We are another hypothesis on top of many – we just have the advantage that our hypothesis has some observations from the formation of a similar feature on Earth to back it up,’ Culberg said.

‘It’s opening up all these new possibilities for a very exciting discovery.’

The findings have been published in the journal Nature Communications.