Chances of limiting global warming to 2.7°F are now 10% at most – but COP26 pledge to keep warming below 3.6ºF IS still achievable if all commitments are met, scientists claim

There is at most a 10 per cent chance of limiting global warming to 2.7°F (1.5°C) unless ‘substantially’ more is done to hit net-zero pledges this decade, a study says.

Researchers have analysed climate targets of 196 countries from the time of the Paris Agreement until the end of the COP26 meeting in Glasgow last November.

Adopted in 2016, the Paris Agreement aims to hold an increase in global average temperature to below 3.6°F (2°C) and pursue efforts to limit the temperature increase to 2.7°F (1.5°C).

Climate pledges made at COP26 could keep warming to just below 3.6ºF, but only if all commitments are implemented as proposed, the scientists say. 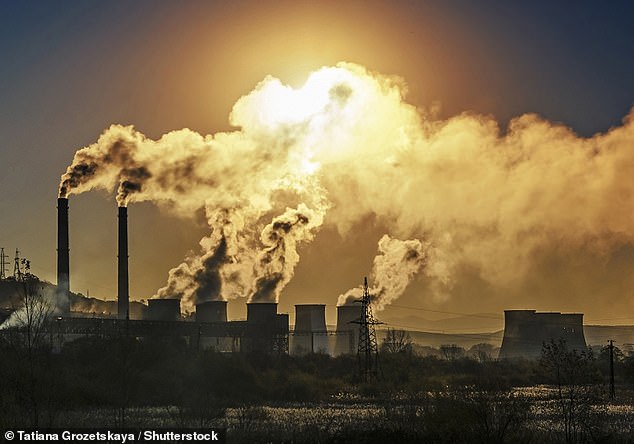 Climate pledges made at the COP26 meeting may have the potential to keep warming to just below 2 °C, but only if all commitments are implemented as proposed, suggests the new study. Much of the discussion at COP26 involved countries’ individual plans to phase out the burning of coal for energy (pictured) 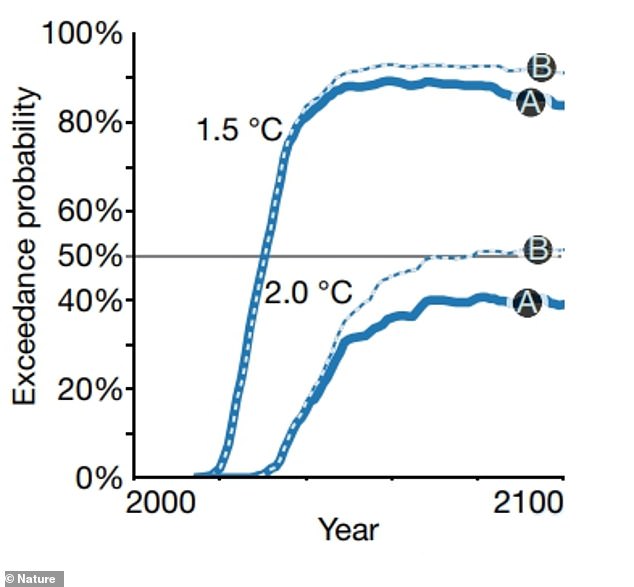 Reducing greenhouse gas emissions including carbon dioxide and methane is seen as key to achieving the aims of the Paris Agreement and limiting climate change.

WHAT IS THE PARIS AGREEMENT?

It seems the more ambitious goal of restricting global warming to 1.5°C (2.7°F) may be more important than ever, according to research that claims 25 per cent of the world could see a significant increase in drier conditions.

Hitting the Paris targets is seen as key to averting a planetary catastrophe, leading to devastation in the form of frequent climate disasters and fatalities.

The new report has been led by researchers at the University of Melbourne in Australia and the International Energy Agency in Paris, France.

‘Our results provide a reason to be optimistic: warming could be limited to 2°C [3.6ºF] or just below, if the pledges on the table are implemented in full and on time,’ they say in their paper, published today in Nature.

‘Peaking of global GHG emissions could be achieved this decade. But our results also provide a sobering assessment of how far current pledges are from limiting warming to 1.5°C [2.7°F].

‘Countries with net-zero targets could bring their net-zero dates forward or aim for net-negative targets.

‘Commitments made so far, especially for this decade, fall far short of what is required to limit temperature rise to 1.5°C.

‘Any delay in reversing the upward trend of emissions, phasing out the unabated use of fossil fuels and developing sustainable, additional and permanent negative-emissions options will put this target out of reach.’

Net zero refers to achieving an overall balance between emissions produced and emissions taken out of the atmosphere.

Net-zero organisations should be actively reducing their emissions aligned to a 1.5ᵒC science-based target in line with the Paris Agreement.

There will be some carbon emissions that cannot be eliminated with current technology, so to achieve net zero, it is essential that certified greenhouse gas removals are also in place.

The UK government says it is committed to ensuring emissions generated by the UK re offset by removing the same amount of carbon from the atmosphere.

In addition, India announced a controversial 2070 net-zero goal at COP26 – two decades later than the one that’s set out by the UK.

The UK aims to reach net zero emissions by 2050, meaning any carbon emissions from the UK would be balanced by schemes to offset an equivalent amount of greenhouse gases from the atmosphere.

Boris Johnson’s government also has interim targets to reduce emissions by 78 per cent by 2035.

Among the other European countries, Sweden and Germany have legally binding net zero targets for 2045, while France, Denmark, Spain, Hungary and Luxemburg also have set theirs for 2050.

Australia, Canada and the US are all also committed to reaching net zero emissions by 2050.

For the study, the researchers analysed inventory data and climate targets of 196 countries from the time of the Paris Agreement until the end of the COP26 meeting in November 2021, and used computer modelling to predict the future.

Looking at the pledges made up to and at COP26 (where India also announced new mitigation goals and long-term targets) they argue that there is still a chance to limit warming to just below 3.6°F (2°C).

Unfortunately, the revised pledges hold only a 6 per cent to 10 per cent chance of meeting the Paris Agreement’s more ambitious goal of limiting global warming to no more than 1.5°C, unless substantially more mitigation action happens this decade. 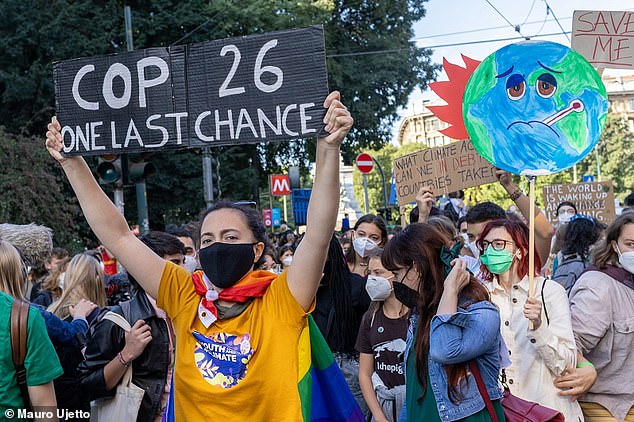 People display placards during a march that took place during the Pre-COP26 youth event in Milan on October 1, 2021

The majority of climate scientists advising the COP26 summit in 2021 fear the world is on course to warm by a ‘catastrophic’ 5.4°F (3°C).

Nearly two thirds of scientists on the Intergovernmental Panel on Climate Change (IPCC) who responded to a survey said they expected the planet to warm by this much.

Just 4 per cent said they thought the world would meet the target of limiting warming to 2.7°F (1.5°C).

One of the agreements reached at COP26 in November was the Glasgow Pact, which requests that countries come back to the table with more ambitious 2030 targets by next year to keep alive the goal of limiting the global temperature increase to 2.7°F.

The Glasgow Pact includes a pledge to phase out the burning of coal for energy, except for in India, China and other countries, on the basis that they can’t phase out coal that quickly.

In an accompanying News & Views article for Nature, climate scientists Zeke Hausfather and Frances Moore point out that global coal usage has not increased since 2013.

The International Energy Agency has also said that coal use is likely to decline over the remainder of the century.

However, the climate scientists, who were not involved in the new research, said impacts of climate change ‘on human civilization and the natural world’ will depend on how hot the planet gets this century.

‘Optimism should be curbed until promises to reduce emissions in the future are backed up with stronger short-term action,’ they say in the accompanying piece.

‘Long-term targets should be treated with scepticism if they are not supported by short-term commitments to put countries on a pathway to meet those targets in the next decade.’ 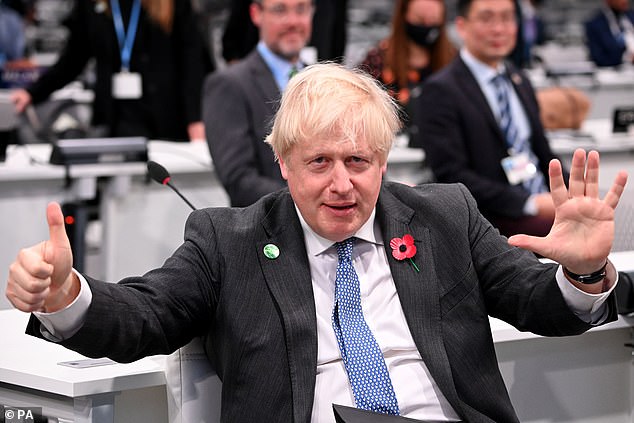 Boris Johnson unveiled his plan for the UK to reach net zero emissions by the year 2050 in October. The PM is pictured here indicating 1.5 degrees with his hands during COP26 in Glasgow on November 2, 2021

Gates said ‘there’s no comparable feat that mankind has ever achieved’, although he did praise the UK for its ‘exemplary’ use of green innovations, including off-shore wind farms.

Boris Johnson took a swipe at China and India at COP26 after the nations connived to water down a climate deal.

On November 14, the Prime Minister used a televised press conference to insist that the Glasgow summit had been a ‘historic success’ that ‘sounded the death knell’ for coal power generation.

But he also voiced disappointment’ at efforts by Beijing and New Delhi  – two of the world’s worst polluters – to weaken efforts to abandon fossil fuels.

The section covering unabated coal – the burning of coal without climate change mitigating technology – was changed from ‘phase out’ to ‘phase down’ under pressure from two of the world’s coal users, leading to angry responses from European and vulnerable countries.

‘Of course, my delight at this progress is tinged with disappointment,’ Mr Johnson said.

‘Those for whom climate change is already a matter of life and death, who can only stand by as their islands are submerged, their farm land turned to desert, their homes battered by storms, they demanded a high level of ambition from this summit.

‘While many of us were willing to go there, that wasn’t true of everybody. Sadly that’s the nature of diplomacy.

‘We can lobby, we can cajole, we can encourage, but we cannot force sovereign nations to do what they do not wish to do.’