The UK will build the ‘brain’ of the world’s largest radio telescope, which is set to explore the evolution of the early Universe when it becomes operational by the end of the decade.

More than £15million has been awarded to a group of British institutions to help them create the prototype software that will control the UK-headquartered Square Kilometre Array (SKA) observatory.

The telescope is one of the grand scientific projects of the 21st Century and will initially comprise 197 dishes and 130,000 antennas spread across South Africa and Australia.

These will all have to be linked, with the ‘brain’ software helping them work together.

It will tell the telescopes where to look and when, diagnosing any issues and translating the telescope signals into useable data from which discoveries can be made.

The UK will build the ‘brain’ of the Square Kilometre Array telescope (pictured), which is set to explore the evolution of the early Universe when it becomes operational later this decade

To begin with a trial will be carried out on a small scale before the software is rolled out across the entire network if it is successful.

SKA will join a number of other next-generation telescopes due to become operational later this decade, including NASA’s $10 billion (£7.4 billion) James Webb Space Telescope and the super-sized European Extremely Large Telescope.

It is set to explore the evolution of the early Universe and delve into the role of some the earliest processes in fashioning galaxies like our own Milky Way, among many other science goals.

The UK has already played a vital role in the software for the telescopes during the design phase, and is now set to continue leading this area as the telescopes are constructed.

Science Minister George Freeman said: ‘It is no surprise that the UK’s outstanding scientists are playing such a vital role in shaping the future of this cutting-edge global observatory, backed by £15 million government funding.

‘As well as providing the foundation for new galaxy-level discoveries, this award will help to guarantee future contracts for UK industry, secure skilled jobs and develop a highly-transferrable technology in the UK — channelling more money back into the UK economy.

‘This reflects the incredible skill of our science community, who are working hand-in-hand with industry to ensure the UK continues to grow as a global science superpower.’

The Science and Technology Facilities Council (STFC) has awarded more than £15million to UK institutions the universities of Oxford, Cambridge and Manchester, as well at STFC labs at Harwell, Daresbury and Edinburgh.

The UK government is the largest contributor to the SKA and currently has a commitment to support 15 per cent of the total cost of construction and initial operations from 2021 to 2030. 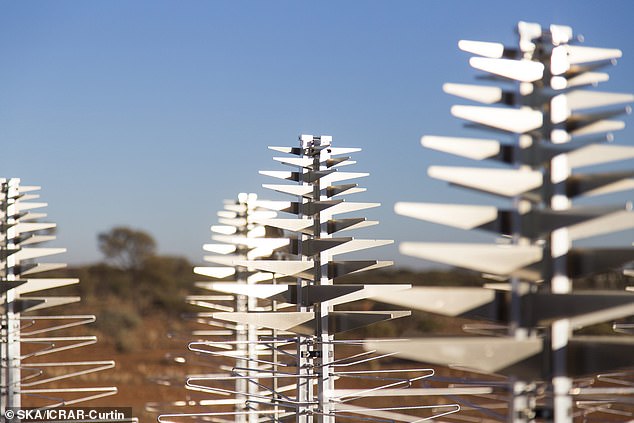 Professor Mark Thomson, executive chairman of STFC and member of the SKAO Council, said: ‘The UK continues to play a leading role in the SKAO and the development of its telescopes.

‘For any large scientific endeavour, the linchpin of its success lies in the infrastructure. Without the power to process and organise the vast amounts of information these telescopes will gather, we could not make the important discoveries.

‘With the skills and expertise of our researchers and colleagues in industry, the UK will deliver the computing brain and nervous system of the telescopes to enable the observations and unlock the science.’

The SKA, which is headquartered near Manchester, recently received the go-ahead to start its construction phase, which is expected to be completed by the end of the decade, with the telescopes anticipated to operate for over 50 years.

As one of the largest scientific endeavours in history, it brings together more than 500 engineers and 1,000 scientists in more than 20 countries.

The telescopes will be able to survey the sky much faster than existing radio telescopes, and so will require powerful computing to ingest and process in real time the expected data rate of 8 terabits of data per second.

It is hoped that the first prototype brain will be ready to go in 2024.

SKA WILL BE THE WORLD’S LARGEST RADIO TELESCOPE

The Square Kilometre Array (SKA), a joint project between Australia and South Africa, will be the world’s largest radio telescope.

More sensitive than any current radio telescope, it will enable scientists to study the universe in more detail than ever before.

The telescope will be located in South Africa and Australia, with the international headquarters located at Jodrell Bank, in the UK.

Nearly 200 mid-frequency dishes (including the existing MeerKAT facility which was officially launched in July 2018) will be located in the Karoo region of South Africa. 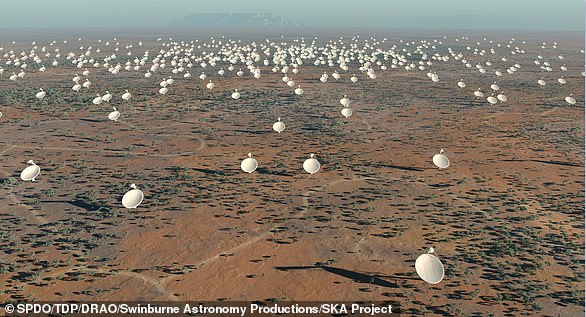 Around 130,000 low-frequency antennas will be located in Western Australia.

Both sites are far from sources of radio frequency interference which will allow for very sensitive measurements to be undertaken.

The SKA will be made up of 2 instruments, SKA-mid (the dishes) and SKA-low (the antennas).

The signals from the dishes will be transported via optical fibre to a central computer where they will be combined using a technique called interferometry.

Similarly the signal from all of the antennas will also be combined and converted to scientific data that astronomers will use to study the universe.