Moonstruck! Massive lunar impact 4.3 billion years ago may explain why the far side of the moon has so many more craters

It is well known that the moon’s near side looks a lot different to the pockmarked far side we never see.

While the nearside is dominated by the vast, dark-coloured remnants of ancient lava flows, the opposite is virtually devoid of such features.

Why the two sides are so different is one of the moon’s most enduring mysteries, but now scientists think they have an explanation.

They believe it relates to a massive impact 4.3 billion years ago near the moon’s south pole which sent a huge plume of heat through the lunar interior.

That plume would have carried certain materials — a suite of rare-Earth and heat-producing elements — to the moon’s nearside, which in turn would have contributed to the volcanism that created the volcanic plains we see today. 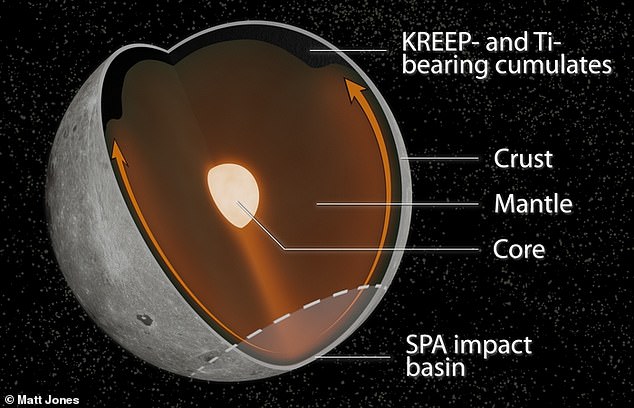 A huge impact 4.3 billion years ago, which formed the South Pole-Aitken basin, melted the moon’s mantle and carried elements to the nearside, which would have produced lava flows, according to a Brown University-led study 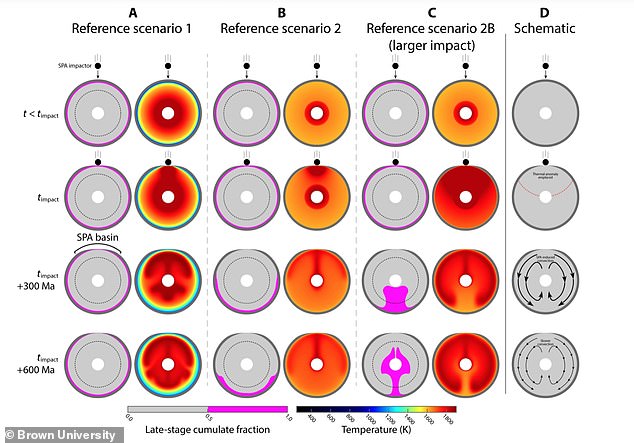 WHAT IS THE ‘DARK SIDE’ OF THE MOON?

The far side of the moon – colloquially known as the dark side – actually gets as much light as the near side but always faces away from Earth.

The far side of the Moon was first observed in 1959, when the Soviet Luna 3 spacecraft returned the first images.

In 1968, astronauts aboard the Apollo 8 spacecraft were the first humans to set eyes on the far side in person as they orbited the moon.

Since then, several missions by NASA and other space agencies have imaged the lunar far side.

That includes NASA’s Deep Impact spacecraft, which imaged the far side from a distance of 31 million miles (49m km) in 2008.

This relatively unexplored region is mountainous and rugged, making a successful landing much harder to achieve.

China’s Chang’e-4 mission that landed in January 2019 was the first to touch down on the surface of the far side.

‘We know that big impacts like the one that formed SPA [South Pole–Aitken basin] would create a lot of heat,’ said Matt Jones, a PhD candidate at Brown University and the study’s lead author.

‘The question is how that heat affects the moon’s interior dynamics. What we show is that under any plausible conditions at the time that SPA formed, it ends up concentrating these heat-producing elements on the nearside.

‘We expect that this contributed to the mantle melting that produced the lava flows we see on the surface.’

The Brown University-led study was carried out with researchers from Purdue University, the Lunar and Planetary Science Laboratory in Arizona, Stanford University and NASA’s Jet Propulsion Laboratory.

The differences between the near and far sides of the moon were first revealed in the 1960s by the Soviet Luna missions and the US Apollo program.

While the differences in volcanic deposits are plain to see, it is hoped that future missions would also reveal differences in the geochemical composition as well.

The nearside is home to a compositional anomaly known as the Procellarum KREEP terrane (PKT) — a concentration of potassium (K), rare earth elements (REE), phosphorus (P), along with heat-producing elements like thorium.

KREEP seems to be concentrated in and around Oceanus Procellarum, the largest of the nearside volcanic plains, but is sparse elsewhere on the moon.

Some scientists have suspected a connection between the PKT and the nearside lava flows, but the question of why that suite of elements was concentrated on the nearside remained.

This new study provides an explanation that is connected to the South Pole–Aitken basin, the second largest known impact crater in the solar system.

For the study, the researchers conducted computer simulations of how heat generated by a giant impact would alter patterns of convection in the moon’s interior, and how that might redistribute KREEP material in the lunar mantle.

KREEP is thought to represent the last part of the mantle to solidify after the moon’s formation.

As such, it likely formed the outermost layer of mantle, just beneath the lunar crust.

Models of the lunar interior suggest that it should have been more or less evenly distributed beneath the surface.

But this new model shows that the uniform distribution would be disrupted by the heat plume from the SPA impact.

According to the model, the KREEP material would have ridden the wave of heat emanating from the SPA impact zone like a surfer. 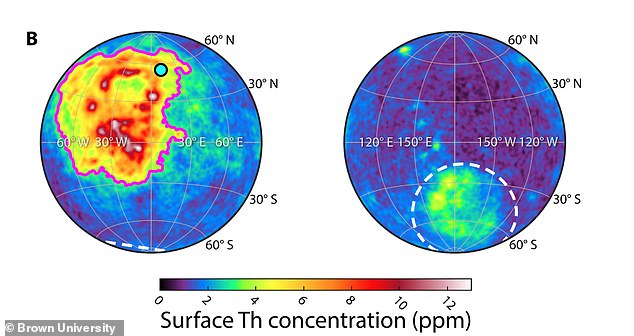 The nearside is home to a compositional anomaly known as the Procellarum KREEP terrane (PKT) — a concentration of potassium (K), rare earth elements (REE), phosphorus (P), along with heat-producing elements like thorium (pictured) 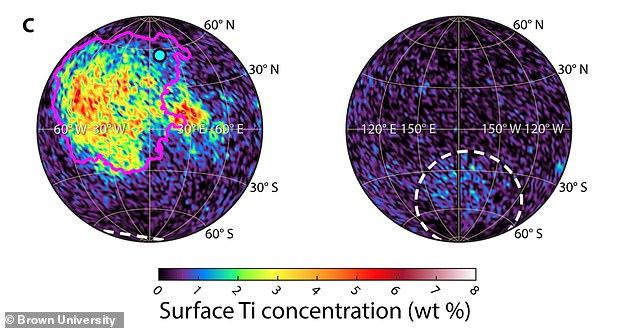 As the heat plume spread beneath the moon’s crust, that material was eventually delivered en masse to the nearside.

The team ran simulations for a number of different impact scenarios, from dead-on hit to a glancing blow.

While each produced differing heat patterns and mobilised KREEP to varying degrees, all created KREEP concentrations on the nearside, consistent with the PKT anomaly.

The researchers say the work provides a credible explanation for one of the moon’s best-kept secrets.

‘How the PKT formed is arguably the most significant open question in lunar science,’ Jones said.

‘And the South Pole–Aitken impact is one of the most significant events in lunar history. This work brings those two things together, and I think our results are really exciting.’

The new study has been published in the journal Science Advances.

Many researchers believe the moon formed after Earth was hit by a planet the size of Mars billions of years ago.

This is called the giant impact hypothesis.

The theory suggests the moon is made up of debris left over following a collision between our planet and a body around 4.5 billion years ago.

The colliding body is sometimes called Theia, after the mythical Greek Titan who was the mother of Selene, the goddess of the moon.

Many researchers believe the moon formed after Earth was hit by a planet the size of Mars billions of years ago. This is called the giant impact hypothesis

But one mystery has persisted, revealed by rocks the Apollo astronauts brought back from the moon: Why are the moon and Earth so similar in their composition?

Several different theories have emerged over the years to explain the similar fingerprints of Earth and the moon.

Perhaps the impact created a huge cloud of debris that mixed thoroughly with the Earth and then later condensed to form the moon.

Or Theia could have, coincidentally, been chemically similar to young Earth.

A third possibility is that the moon formed from Earthen materials, rather than from Theia, although this would have been a very unusual type of impact.