A Greenland shark that is thought to have been about 100 years old when it was found stranded on a Cornish beach died of meningitis, a post mortem has found.

It is believed to be the first evidence of the disease in the species, but scientists say it is too early to link it to man-made stressors to the marine environment, such as pollution.

The 13ft (4 metre) long female shark was first discovered by a dog walker on March 13 on a beach near Penzance, but was washed back into the sea before it could be properly examined.

It was later found floating in the water off Newlyn harbour beach by a tourist boat after a two-day search, and an autopsy that is thought to be the first of its kind undertaken in the UK was carried out.

Very little is known about the incredibly rare species, which can live to over 400 years old, but the sharks are usually found 1.5 miles (2.5km) below the surface of the Arctic and North Atlantic oceans.

They are the oldest living vertebrates on Earth and one of the most mysterious creatures on the planet.

Scientists believe the brain infection explains why the shark was out of her natural deep-water habitat, and the cause of her stranding and eventual death. 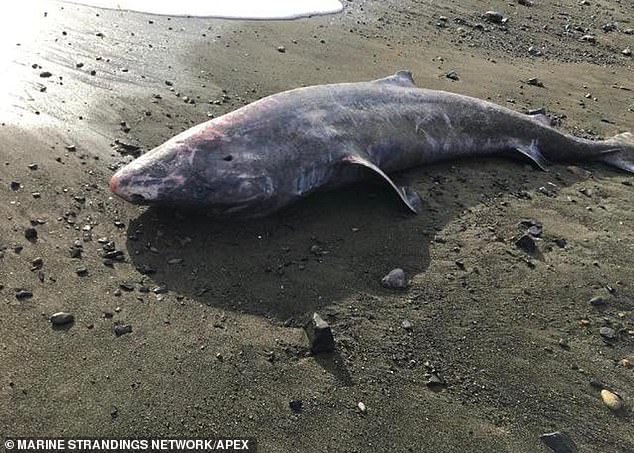 A Greenland shark that is thought to have been about 100 years old when it was found stranded on a Cornish beach (pictured) died of meningitis, a post mortem has found

Meningitis is inflammation of the membranes that surround and protect the brain and spinal cord.

In humans, anyone can be affected but at-risk people include those aged under five, 15-to-24 and over 45.

People exposed to passive smoking or with suppressed immune systems, such as patients undergoing chemotherapy, are also more at risk.

The most common forms of meningitis are bacterial and viral.

Some 10 per cent of bacterial cases are fatal.

Viral is rarely life-threatening but can cause long-lasting effects, such as headaches, fatigue and memory problems.

Her brain was slightly ‘discoloured and congested’ with a cloudy fluid, which contained a type of bacteria called Pasteurella that experts think is likely to have caused the meningitis.

It is not known how the shark got the infection.

Despite probably being born just after the First World War, the century-old female is still considered a ‘juvenile’ by marine biologists.

She had damage to her fins and silt in her stomach, suggesting she may have been alive when she was stranded.

The post-mortem was conducted by the Cornwall Marine Pathology Team, which is part of the Zoological Society of London’s (ZSL) Cetacean Strandings Investigation Programme (CSIP).

‘The shark’s body was in poor condition and there were signs of haemorrhage within the soft tissue around the pectoral fins which, coupled with the silt found in her stomach, suggested she may well have live stranded,’ said veterinary pathologist James Barnett, of the Cornwall Marine Pathology Team.

‘As far as we’re aware, this is one of the first post-mortem examinations here in the UK of a Greenland shark and the first account of meningitis in this species.’

Rob Deaville, project lead for the CSIP, said: ‘This unfortunate and extraordinary stranding has allowed us to get an insight into the life and death of a species we know little about.

‘Discovering that this shark had meningitis is likely a world’s first, but the significance of this in terms of any wider stressors is unknown.

‘Ultimately, like most marine life, deep sea species such as Greenland sharks may also be impacted by human pressures on the ocean but there is not enough evidence at this stage to make any connections.’

Mr Deaville thanked all those who had worked together to recover the body, adding: ‘This was an exceptional collaborative effort by all involved and was a unique opportunity to learn more about the life of this cryptic and endangered deep-water shark.’

The strandings programme investigate every instance of cetaceans, whales, dolphins and porpoises, washing up on UK shores, as well as strandings of marine turtles and basking sharks. 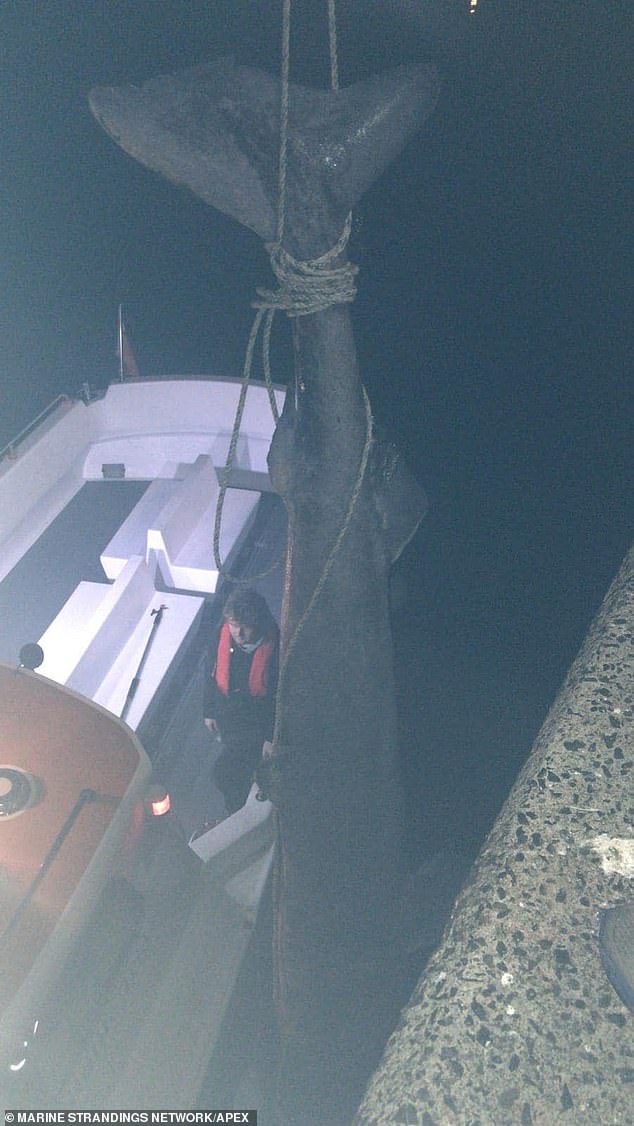 Staff from local charity the Cornwall Wildlife Trust’s were contacted and arrived on the beach within an hour, but the tide had come in and washed the shark’s body back out to sea. A crew from Mermaid Pleasure Trips found the animal’s body again and took it ashore 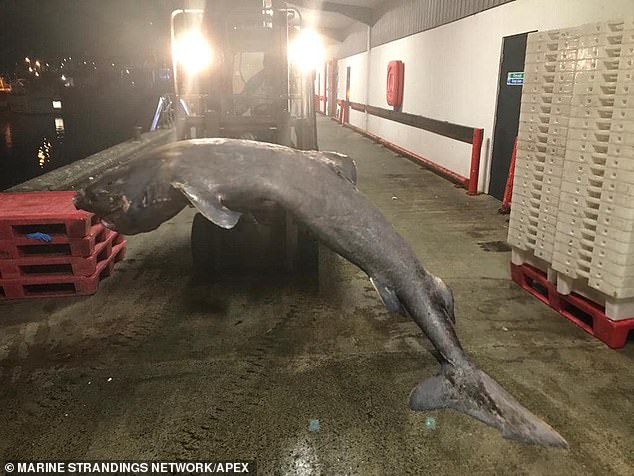 Greenland sharks are native to the Arctic and North Atlantic Oceans. While they can be found in deep waters around the UK the Marine Conservation Society says it is very rare for humans to come across them in British waters. Above: The shark is seen being lifted in the air by a fork lift truck after being found for the second time

The last time a Greenland shark washed up in the UK was in Northumberland in 2013.

The species, which is listed as vulnerable, was once hunted for its liver oil but now often ends up caught in fishing nets.

The same Pasteurella bacteria discovered in the shark has also been found to cause meningitis in humans but it is extremely rare.

Pathologists do not yet know what species of Pasteurella affected the shark and will investigate further.

It is not the first time meningitis has been described in sharks, although scientists do not know how widespread it is.

A research paper on the Greenland shark will be published in due course, experts said.

WHAT DO WE KNOW ABOUT THE LIVES OF GREENLAND SHARKS?

Massive slow-moving predators that dwell in the cold waters of the Arctic and North Atlantic Oceans are said to be the longest-living vertebrates on Earth, with one especially ancient individual estimated to be as much as 512 years old.

Recent research found that Greenland sharks can live upwards of 500 years, and don’t reach sexual maturity until they’re around 150.

But, for these remarkable creatures, longevity may come at a cost.

The species is often plagued by worm-like parasites that latch onto their eyes – and, these sharks have been known to enjoy an occasional meal of rotting polar bear carcass.

In a study published this summer, researchers used traces of carbon-14 produced by nuclear tests in the 1950s to determine the age of Greenland sharks, by examining lens crystallines in their eyes.

The largest was estimated to be about 392 years old.

But, given some uncertainty in the method, it could be anywhere from 272 to 512 years old.

Even at the lowest estimates, however, the researchers say the Greenland sharks are Earth’s longest-living vertebrates.

Despite their amazing lifespan and elusive nature, accidentally catching one of these sharks is sometimes considered the equivalent of ‘stepping in dog poop,’ a biologist told The New Yorker.

And, while seal are known to be among their most important prey items, these sharks also sometimes chow down on what experts have dubbed ‘polar bear steak.’

In September, Danish marine biologist Julius Nielsen, who led the recently-published study, shared a stomach-churning look at one such specimen.

The image posted on Instagram reveals the remains of a polar bear extracted from the stomach of a Greenland shark.

‘And no, I don’t think the shark attacked the bear,’ Nielsen wrote.

‘It is much more likely a carcass found by the shark. Polar bear remnants in Greenland shark stomachs are extremely rare and polar bears are considered of no importance as food source for sharks in Greenland waters.’

Scientists have also noted the presence of parasites dangling from these sharks’ corneas, according to The New Yorker.