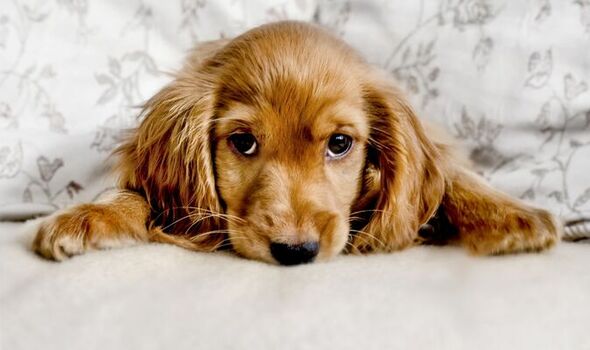 A new study, from Duquesne University in Pittsburgh, examined dogs’ facial twitch muscles. Speaking about the findings, senior author of the study Anne Burrows said: “They’re communicating with us and are able to make facial expressions just like us. They want to grab our attention with a facial expression.”

She added: “Dogs are unique from other mammals in their reciprocated bond with humans which can be demonstrated through mutual gaze, something we do not observe between humans and other domesticated mammals such as horses or cats.”

The study, presented at the American Association for Anatomy annual meeting, found that dogs have similar muscles in their faces to humans, meaning they are able to form facial expressions similar to our own.

It suggests that these features have been selectively bred by humans over the last 33,000 years, since our ancestors first started breeding wolves.

Ms Burrows said: “Throughout the domestication process, humans may have bred dogs selectively based on facial expressions that were similar to their own, and over time dog muscles could have evolved to become ‘faster’, further benefiting communication between dogs and humans”.

She added: “What these findings tell us is that these Upper Paleolithic people wanted an animal that could communicate via facial expression, just like they can.

“But they were looking for something that wasn’t going to chase away all of the four-legged prey items.”

Slow-twitch muscle fibres, however, are more efficient – making them a useful muscle group for howling at the moon for extended periods of time – but they also allow for less expression.

Ms Burrows explained: “What we found was that dogs have almost all fast-twitch muscles and hardly any slow-twitch fibres at all”.

But wolves, she said, have an even balance between the two, suggesting that the slow-twitch fibres were lost in domestication.

DON’T MISS:
‘Horrific’ ordeal as woman ‘spat at’ and ‘threatened’ by boys on train [REPORT]
Dogs and cats increasingly being cloned as owners refuse to let go [INSIGHT]
Dog who had ‘never been outside’ saved from barn with 44 other animals [REVEAL]

The researcher added: “These differences suggest that having faster muscle fibres contributes to a dog’s ability to communicate effectively with people.”

A previous study found that dogs also have an additional muscle in their faces that helps create the “puppy-dog eyes” expression.

Lead author of the study, Dr Juliane Kaminski, said: “The evidence is compelling that dogs developed a muscle to raise the inner eyebrow after they were domesticated from wolves.

“We also studied dogs’ and wolves’ behaviour, and when exposed to a human for two minutes, dogs raised their inner eyebrows more and at higher intensities than wolves.

“The findings suggest that expressive eyebrows in dogs may be a result of humans’ unconscious preferences that influenced selection during domestication.

“When dogs make the movement, it seems to elicit a strong desire in humans to look after them.

“This would give dogs that move their eyebrows more a selection advantage over others and reinforce the puppy dog eyes trait for future generations.”