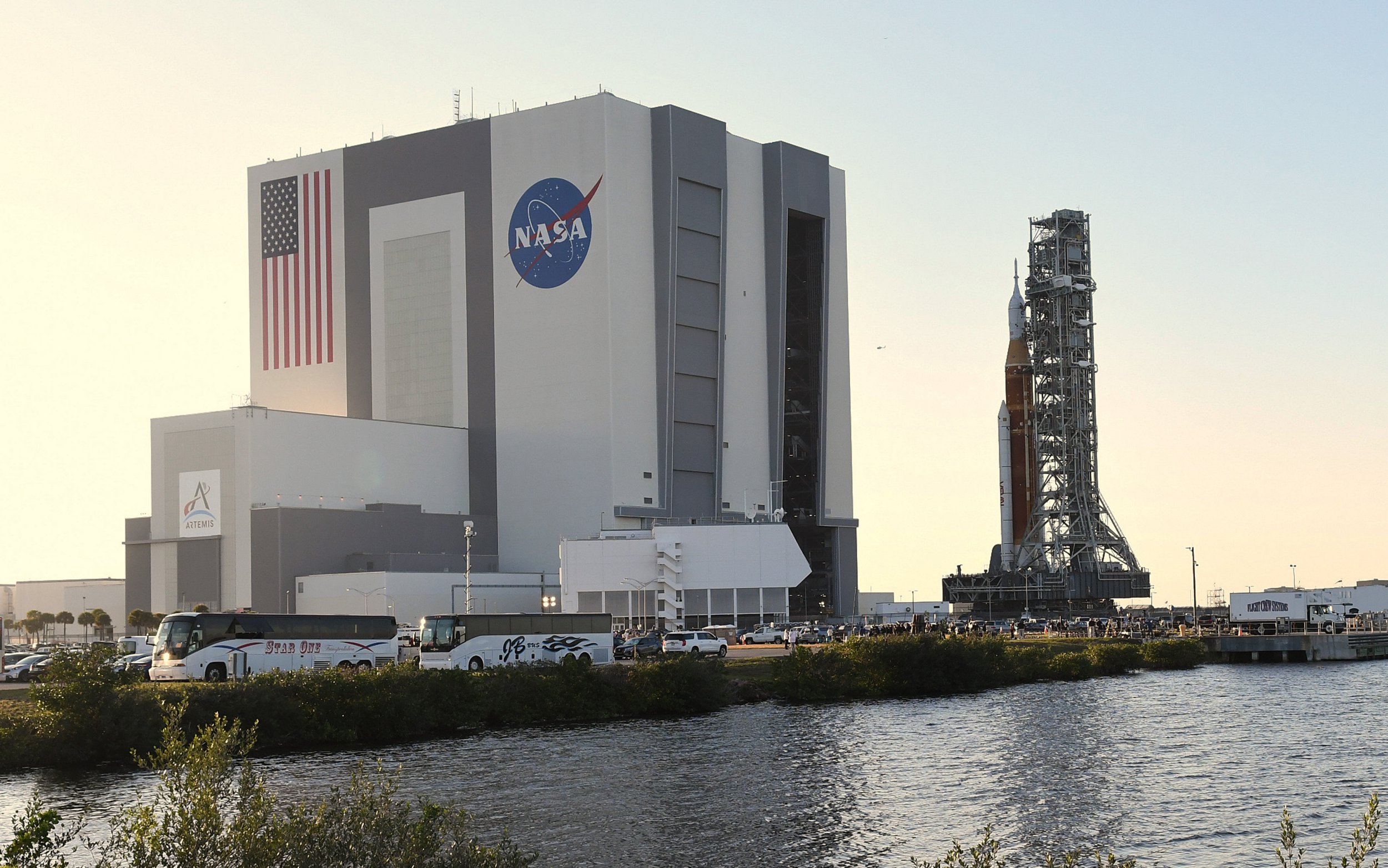 Nasa was forced to scrap a crucial test of its gigantic moon ‘megarocket’ this week following adverse weather in Florida.

Known as the Space Launch System rocket – or SLS for short – it is the vehicle that Nasa hopes will put man – and, more importantly, woman – on the moon.

It is the basis for the Artemis mission: the return of humans to the lunar surface for the first time since 1972.

The £28 billion SLS rocket will be able to carry a crew capsule up to the moon and, potentially, even work for missions to Mars in the future.

But they have to get it off the ground first.

The 322-feet (98 meter) rocket was due to undergo a ‘wet test’ this week. A million gallons of rocket fuel was loaded into craft for the test, which comprises everything apart from an actual launch.

Sadly, blast-off was halted first due to thunderstorms and lightning around the launchpad in Cape Canaveral and then because of a vent valve issue encountered during fuelling.

‘This is why we test,’ explained Nasa in a tweet.

Astronauts will strap in for the second test flight slated for 2024, looping around the moon and back. That would pave the way for astronauts landing on the moon around 2025, according to Nasa.

But the space agnecy has been hit with delays and faces increasing pressure from China, which is also aiming to get to the moon’s surface.

The US Government Accountability Office recently warned that technical challenges remain for the mission. Primarily, the lunar lander and spacesuits could further delay the moon landing which is already years behind schedule.

Not to mention the billions of dollars of escalating cost.

‘We are being cautious — an abundance of caution — and that’s particularly in the environment that we’re in nowadays,’ Tom Whitmeyer, head of Nasa’s exploration systems development, said before the first test took place.

Nasa expects to announce the crews for the initial lunar missions this summer. The pool of candidates includes nine men and nine women; two are at the International Space Station and two are due to arrive there in a few weeks.

Twenty-four astronauts flew to the moon during Apollo from 1968 through 1972; 12 landed on the lunar surface.

What is the Artemis mission?

Unlike Apollo, Nasa is partnering with private business for its moon program, named Artemis after Apollo’s twin sister in Greek mythology.

While Nasa’s rocket and capsule will get astronauts into lunar orbit, SpaceX’s still-in-development Starship will carry them down to the lunar surface, at least for the first mission.

The space agency’s goal is to develop a sustainable moon presence, then aim for Mars.

Nasa Administrator Bill Nelson recently cited 2040 as the target for a Martian expedition with astronauts.