Don’t bother turning on the charm! Personality is not as important as intelligence when it comes to getting good grades and a well-paid job

Some people think personality gets you further in life, while others believe it is best to rely on brains or looks.

Now a new study seeks to answer the question once and for all, and has found that despite previous research suggesting charm is the key to success, intelligence is actually more important.

That is because being smart is more predictive of getting a well-paid job, while in education it also leads to higher grades.

The research by experts at Tel Aviv University in Israel contradicts a previous study led by the University of Chicago, which found that personality was the more important indicator in predicting important life outcomes. 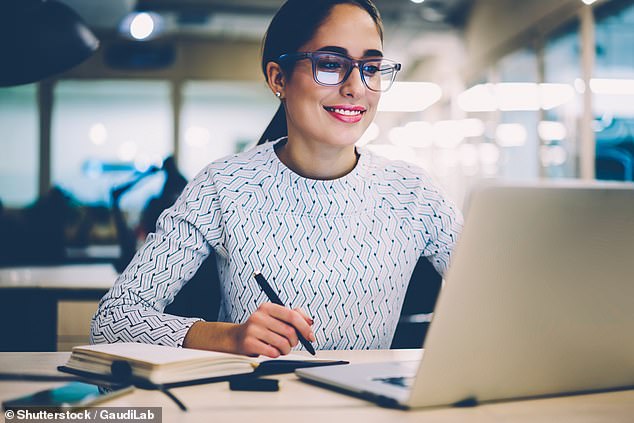 Personality is not as important as intelligence when it comes to getting good grades and a well-paid job, a new study suggests (stock image)

DO WE HAVE ‘INTELLIGENCE GENES’?

Scientists know about 52 genes linked to the intelligence trait, 40 of which are relatively new discoveries.

An international research team led by Vrije Universiteit Amsterdam studied genetic data from over 78,000 individuals back in 2017.

The data included information on DNA genotypes and intelligence scores, which led the team to discover new genes and biological routes for intelligence.

Scientists found that many people with these genes are more likely to have other traits, including being tall, thin and unlikely to smoke.

People who expressed the genes were less likely to suffer from Alzheimer’s disease, depressive symptoms, schizophrenia and obesity.

In a more recent study, researchers found genes we are born with account for more than half the differences in intelligence between people.

Using a number of datasets on personality, intelligence and success, the researchers analysed correlations between positive life outcomes and innate traits.

They found that intelligence predicted double the rate of pay, in comparison to personality.

‘These findings are consistent with previous studies which demonstrated that intelligence is the most dominant predictor of academic and job performance.’

However, the researchers said their study did not compare the roles of intelligence and personality in predicting depression, physical health, mental health and life satisfaction, which could be the subject of future research.

Authors Chen Zismana and Yoav Ganzachb also stressed that their findings do not suggest that intelligence will guarantee you success – only that it is a better indicator of whether or not you will be successful than any particular personality trait.

‘Although the analyses reported in this paper clearly suggest that educational and occupational success is better predicted by measures of intelligence than by measures of the big five personality dimensions, they do not necessarily imply that intelligence is more important for success than personality,’ they wrote in their paper.

The study has been published in the journal Intelligence.

‘INTELLIGENCE QUOTIENT’ (IQ) IS A MEASURE OF MENTAL ABILITY

IQ stands for Intelligence Quotient and it is used to measure mental ability.

The abbreviation ‘IQ’ was first coined by psychologist William Stern to describe the German term Intelligenzquotient.

Historically, IQ is a score achieved by dividing a person’s mental age, obtained with an intelligence test, by their age.

The resulting fraction is then multiplied by 100 to obtain an IQ score.

An IQ of 100 has long been considered the median score.

Because of the way the test results are scaled, a person with an IQ of 60 is not half as intelligent as someone with an IQ of 120.

The arrangement of IQ scores also means that results are ‘normally distributed’, meaning just as many people score either side of the average.

For example, the same amount of people score 70 as people who score 130.

Although the accuracy of intelligence tests is somewhat disputed, they are still widely used.

For Mensa, the acceptance score requires members to be within the top two per cent of the general population.

Depending on the IQ test, this can require a score of at least 130.