The Hubble Space Telescope has found a planet nine times the mass of Jupiter that is still ‘in the womb’, NASA has announced.

AB Aurigae b orbits the star at an unusually far distance – 8.6 billion miles, which is more than two times further than Pluto is from our Sun (3.7 billion miles).

Just like Jupiter and Saturn, the planet is a gas giant – composed mostly of hydrogen and helium, with swirling gases surrounding a smaller solid core.

It is forming through what NASA experts call an ‘unconventional’ and ‘intense and violent process’, different to the generally-accepted theory of planetary formation.

Researchers used Hubble data going back to 2007, as well as the Subaru Telescope near the summit of an inactive Hawaiian volcano, to detect and study the planet. 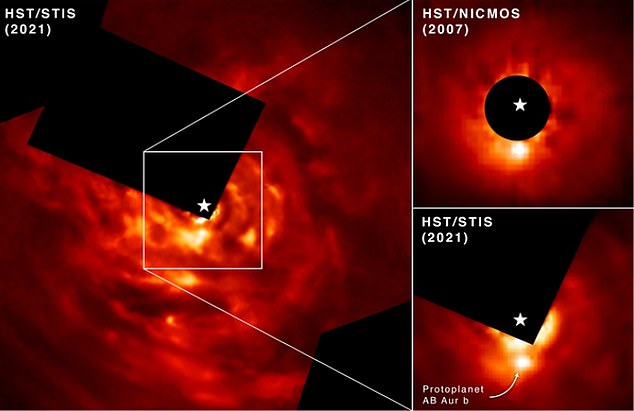 Researchers were able to directly image newly forming exoplanet AB Aurigae b over a 13-year span using Hubble’s Space Telescope Imaging Spectrograph (STIS) and its Near Infrared Camera and Multi-Object Spectrograph (NICMOS). In the top right, Hubble’s NICMOS image captured in 2007 shows AB Aurigae b in a due south position compared to its host star, which is covered by the instrument’s coronagraph (the star is denoted by the white star-shape mark). The image captured in 2021 by STIS shows the planet has moved in a counterclockwise motion over time 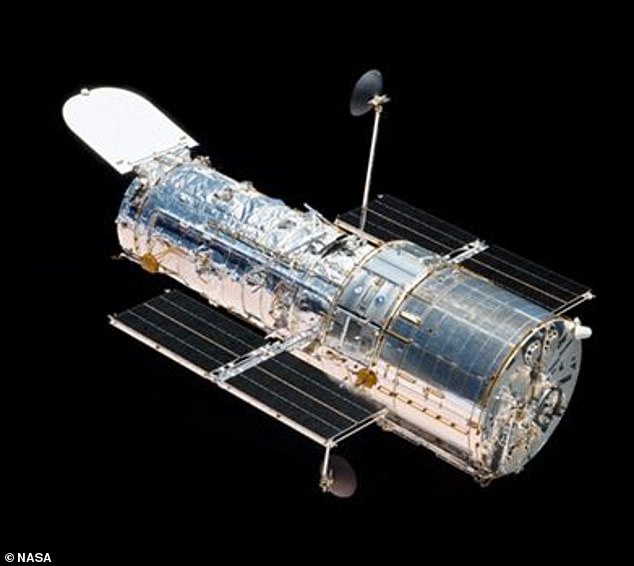 Hubble (pictured) orbits Earth at a speed of about 17,000mph (27,300kph) in low Earth orbit at about 340 miles in altitude, slightly higher than the International Space Station (ISS)

Distance from its sun: 8.6 billion miles

The work has been detailed in a new study, written by experts at NASA and published on Monday in the journal Nature Astronomy.

‘We think it is still very early on in its ‘birthing’ process,’ said lead author Thayne Currie of the Subaru Telescope and the NASA-Ames Research Center in Mountain View, California.

‘Evidence suggests that this is the earliest stage of formation ever observed for a gas giant.’

The planet is embedded in an expansive planet-forming disk that surrounds its star, located 508 light years from Earth. (One light year is the distance light travels in a year – 5.9 trillion miles, or 9.5 trillion km).

Its star, AB Aurigae, is estimated to be around 2 million years old – an infant by stellar standards. For comparison, our own sun is about 4.5 billion years old.

AB Aurigae got a fleeting moment of fame when its image appeared in a scene in the 2021 film ‘Don’t Look Up’, when the new study was under review.

The star is about 2.4 times more massive than our sun and almost 60 times brighter.

Of the more than 5,000 planets beyond our solar system – known as exoplanets – to be identified, AB Aurigae b is among the largest.

It is approaching the maximum size to be classified as a planet rather than a brown dwarf, an astronomical object somewhere between planet and star.

Almost all known exoplanets have orbits around their stars within the distance that separates our sun and its most faraway planet Neptune.

But AB Aurigae b orbits three times as far as Neptune from the sun and 93 times Earth’s distance from the sun. 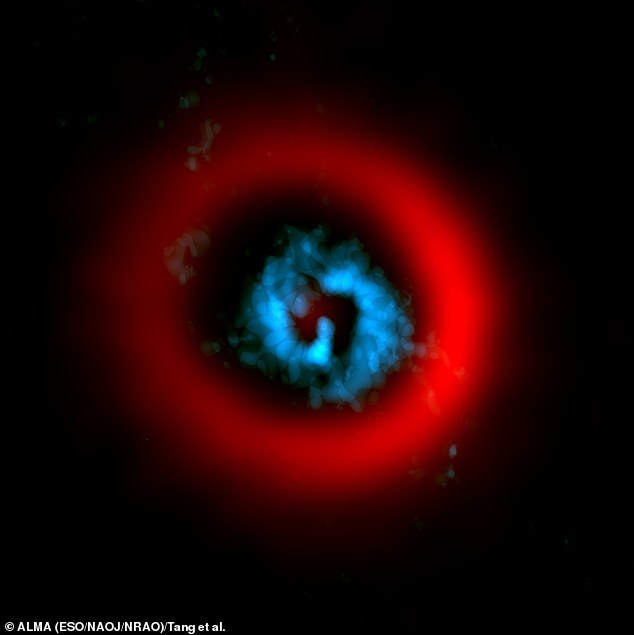 The newly-found planet that surrounds a star called AB Aurigae located 508 light years from Earth. This image shows the dust ring (red) and gaseous spirals (blue) of AB Aurigae’s circumstellar disk (a ring-shaped accumulation of matter in orbit around a star)

Data was compared to those from a state-of-the-art planet imaging instrument called SCExAO on Japan’s 27-foot Subaru Telescope located at the summit of Mauna Kea, Hawaii.

WHAT IS CORE ACCRETION?

The most widely accepted theory for gas giant formation is the so-called core accretion model.

In this model, a planet-sized core of ice and rock forms first.

Then, an inflow of interstellar gas and dust attaches itself to the growing planet.

Researchers think the new planet’s birth appears to be following a different process than the standard planetary formation model, known as core accretion.

All planets are made from material that originated in a circumstellar disk – a ring-shaped accumulation of matter such as gas, dust and asteroids that orbit a star.

The dominant theory for gas giant planet formation, ‘core accretion’, describes where planets embedded in the disk grow from small objects – with sizes ranging from dust grains to boulders – by colliding and sticking together as they orbit.

If this core reaches several times Earth’s mass, then it begins accumulating gas from the disk.

However, this process cannot form giant planets at large orbital distance, ‘so this discovery challenges our understanding of planet formation’, said study author Olivier Guyon of the University of Arizona.

AB Aurigae b instead formed through what’s known as the ‘disk instability’ mechanism, the team say.

This is where, as a massive disk around a star cools, gravity causes the disk to rapidly break up into one or more planet-mass fragments. 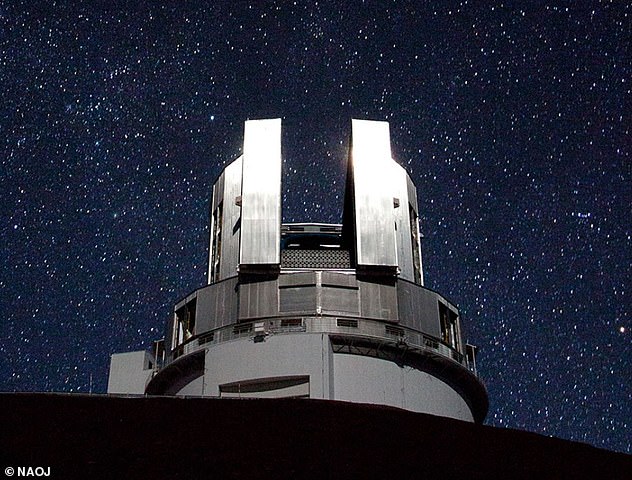 Data was compared to those from a state-of-the-art planet imaging instrument called SCExAO on Japan’s 8.2-meter Subaru Telescope located at the summit of Mauna Kea, Hawaii (pictured)

Understanding the early days of the formation of Jupiter-like planets provides astronomers with more context into the history of our own solar system.

Early in its life, our own sun was also was surrounded by a disk that gave rise to Earth and the other planets.

‘Planet formation is very complex and messy, with many surprises still ahead.’

NASA CONFIRMS THERE ARE MORE THAN 5,000 PLANETS BEYOND OUR SOLAR SYSTEM

NASA has confirmed that there are more than 5,000 known planets outside our solar system, known as exoplanets.

The US space agency has added another 65 exoplanets to the online NASA Exoplanet Archive, bringing the grand total to 5,009, as of April 1, 2022.

This number was at 5,005 on March 22, showing that four planets had been added to the total in just 10 days.

Exoplanets found so far include small, rocky worlds like Earth, gas giants many times larger than Jupiter, and ‘hot Jupiters’ in scorchingly close orbits around their stars.

The more than 5,000 exoplanets confirmed in our galaxy so far include a variety of types – among them a mysterious variety known as ‘super-Earths’ because they are larger than our world and possibly rocky

However, NASA stresses that only ‘a tiny fraction’ of all the planets in the Milky Way galaxy alone have been found.

The majority of exoplanets are gaseous, like Jupiter or Neptune, rather than terrestrial, according to NASA’s online database.

Most exoplanets are found by measuring the dimming of a star that happens to have a planet pass in front of it, called the transit method.

Another way to detect exoplanets, called the Doppler method, measures the ‘wobbling’ of stars due to the gravitational pull of orbiting planets.