Cosmic ricochets: Remains of one the Milky Way’s most famous explosions are not expanding evenly and may have collided with something, study finds

The remains of Cassiopeia A, one of the most famous supernova explosions in the Milky Way, is not expanding evenly in all directions, according to a new study.

The inner nebula of the much-studied supernova may have collided with another phenomenon, according to a team from the University of Amsterdam and Harvard.

Cassiopeia A is the remnant of an exploded star in the Cassiopeia constellation, about 11,000 light years away, with light from that event reaching Earth in 1670.

Studying 19 years of data from the Chandra X-ray Observatory, which is in orbit about 85,000 miles above the Earth, helped the team to better understand the expansion of the nebula, finding the inner regions aren’t expanding at all, and the outer regions are accelerating, when theory suggested it should be slowing down.

Only two things could explain this unexpected behavior – a hole in the nebula creating a vacuum – or it collided with something, and computer models support the idea of a collision between the nebula and another celestial object.

The team say the shock wave, created by the supernova, collided with a shell of gas particles that were created when the dead star blew away an irregular wind of gas. 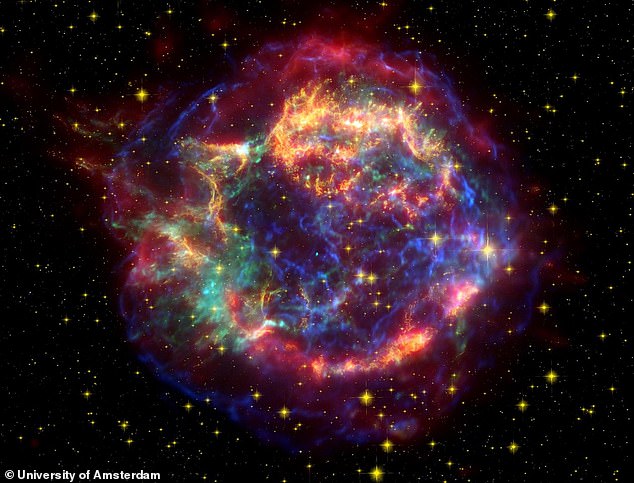 The remains of Cassiopeia A, one of the most famous supernova explosions in the Milky Way, is not expanding evenly in all directions, according to a new study

When light from the explosion reached Earth in the 17th century, there would have been too much gas and dust surrounding the star for it to be seen with the naked eye – or the very basic telescopes of the time.

The Cassiopeia A explosion nebula is expanding at an average rate of 8.6 million to 13.3 million miles per hour, and has a temperature of 54 million Fahrenheit.

The expansion is most likely occurring in gas that was blown out by the star long before the explosion, the team explained, saying it is 16 light years across.

When a large reaches the end of its life it blasts off its outer layers, surrounding the star in a large layer of gas and dust. Larger stars then explode in a giant supernova.

The researchers, led by Jaccob Vink from the University of Amsterdam, used observations of the nebula that resulted from this explosion using Chandra.

The scientists observed that on the western side of Cassiopeia A, the inner regions of the explosion nebula are not expanding, but moving inwards. 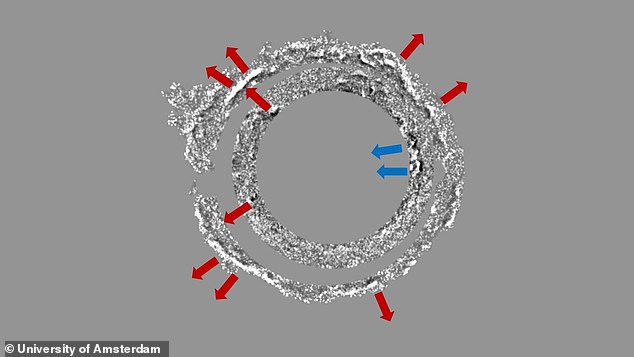 Only two things could explain this unexpected behavior – a hole in the nebula creating a vacuum – or it collided with something, and computer models support the idea of a collision between the nebula and another celestial object

‘The backward movement in the west can mean two things,’ says Jaccob Vink.

‘Either there is a hole somewhere, a kind of vacuum, in the supernova material, causing the hot shell to suddenly move inwards locally. Or the nebula has collided with something.’

Computer models they created, based on the measurements they took, suggested the collision theory was the most likely, predicting that after a collision, the shock first decreases in speed then accelerates. ‘Exactly as we have measured,’ says Vink.

The collision scenario was also investigated recently by an Italian group, that suspected the shock wave collided with a shell of gas particles.

This shell would have been created when the unexploded star blew away an irregular wind of gas particles at the end of its life.

Cassiopeia A has attracted a lot of attention lately. For example, NASA’s new X-ray satellite IXPE published its first image of the exploded star on Valentine’s Day. And the James Webb Space Telescope will turn its infrared gaze to the supernova remnants later this year.

A supernova occurs when a star explodes, shooting debris and particles into space.

A supernova burns for only a short period of time, but it can tell scientists a lot about how the universe began.

One kind of supernova has shown scientists that we live in an expanding universe, one that is growing at an ever increasing rate.

Scientists have also determined that supernovas play a key role in distributing elements throughout the universe.

In 1987, astronomers spotted a ‘titanic supernova’ in a nearby galaxy blazing with the power of over 100 million suns (pictured)

There are two known types of supernova.

The first type occurs in binary star systems when one of the two stars, a carbon-oxygen white dwarf, steals matter from its companion star.

Eventually, the white dwarf accumulates too much matter, causing the star to explode, resulting in a supernova.

The second type of supernova occurs at the end of a single star’s lifetime.

As the star runs out of nuclear fuel, some of its mass flows into its core.

Eventually, the core is so heavy it can’t stand its own gravitational force and the core collapses, resulting in another giant explosion.

Many elements found on Earth are made in the core of stars and these elements travel on to form new stars, planets and everything else in the universe.