Like father, like son! Young Caspian terns are led on their first migrations by their DADS, study finds

When it comes to learning to drive, many of us turn to our fathers for help.

And it seems that it’s not just humans who rely on their fathers for advice – Caspian terns also turn to their dads when it comes to navigating their first migrations.

Researchers from the University of Helsinki tracked entire bird families with GPS devices to understand how the animals learn to find their way from the Baltic Sea to Africa.

Their analysis revealed that male parents carry the main responsibility for leading their young during their very first migration. 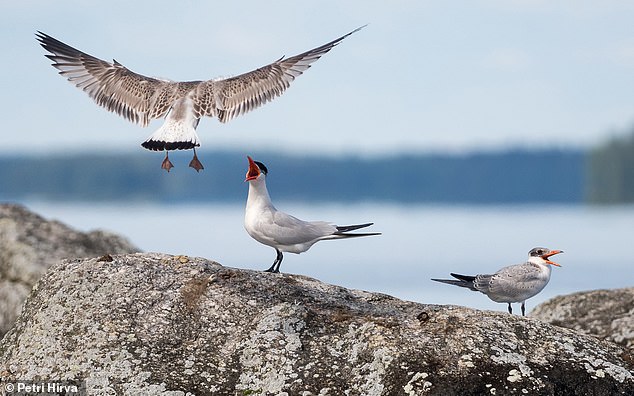 The largest of the terns, the Caspian Tern is one of the most widespread tern species in the world, occurring on every continent except Antarctica.

It is white with a light gray mantle and white undersides.

The breast and face are also white. The legs and eyes are black, and the bill is large, heavy, and bright red-orange.

It has a shallowly forked tail and a slight crest that gives the head a squared-off look.

In breeding plumage, the Caspian Tern sports a solid black cap, which recedes in the non-breeding season, resulting in a spray of white at the face mixing with black.

Juveniles appear similar to adults in non-breeding plumage but have a lighter mantle that is mottled with light tan.

In the new study, the team set out to understand how young birds find their way to distant wintering locations.

Patrik Byholm, who led the study, said: ‘We wanted to get a better idea of how the migratory skills of birds are passed from one generation to another in a species where individuals normally migrate together.’

Previous research has revealed that many birds migrate in groups.

However, until now, little has been known about how individual birds actually interact during these group migrations.

Their analysis revealed that adult males – usually the biological father – were responsible for teaching the youngsters the ropes.

‘This is very fascinating behaviour, which we really did not expect to find when setting up our study,’ Mr Byholm said.

The young birds were found to stick close to an adult male during their first migration.

Sadly, young birds that lost contact with their parent died, highlighting how crucial it is for the young to remain close with an experienced adult.

Meanwhile, on their journey back to the Baltic Sea from Africa for breeding season, young terns were found to use the migratory routes they took with their father.

‘This indicates that in Caspian terns, migration knowledge is inherited through culture from one generation to another,’ explained Susanna Akesson from Lund University, co-author of the study.

‘This has consequences on the decisions individuals make years after they first migrated with their father.’

It remains unclear why the males, instead of the females, are mainly engaged in leading their young on their first migration southwards. 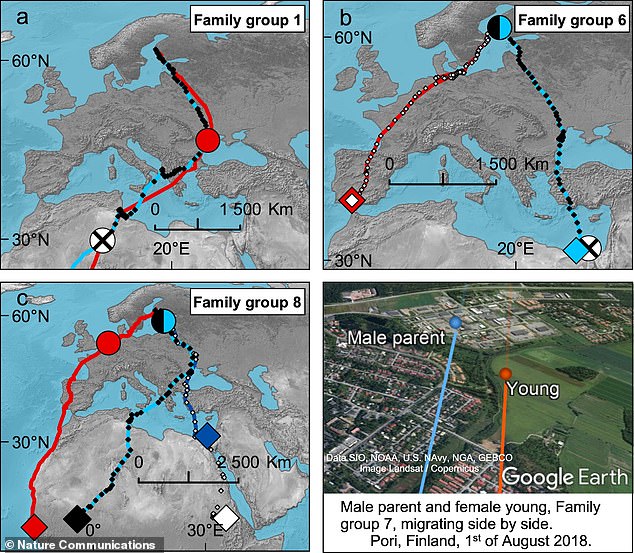 The findings are important for understanding whether migratory birds can persist amid rising global temperatures and the potential loss of their habitats.

‘Considering the recent widespread declines of migratory birds, there is an urgent need to improve our general understanding of how social learning contributes to flexibility in migratory strategies, to ultimately be able to take appropriate management actions to conserve migratory species across the world,’ the researchers said in their study, published in Nature Communications.

The study comes shortly after research revealed that migratory birds have evolved to have lighter-coloured feathers to help them keep cool while flying over vast distances.

Birds such as sanderlings and sandpipers fly thousands of miles every year to find the best ecological conditions and habitats for feeding, breeding and raising their young.

During these arduous journeys, they are often exposed to extreme weather conditions, and are at risk of overheating if they spend too long in direct sunlight.

However, new research from the Max Planck Institute for Ornithology in Germany shows that many migratory bird species have evolved to have pale plumage, which absorbs less heat than dark feathers.

This means the birds are less likely to overheat when exposed to sunshine for long periods of time.

WHY DO MIGRATING BIRDS FLY IN A V-FORMATION?

Birds fly in a v-formation to help them fly more efficiently, staying aloft while expending as little energy as possible.

Scientists learned the aviation secrets of migrating birds after attaching tiny logging devices to a flock of 14 northern bald ibises that not only tracked their position and speed by satellite but measured every flap of their wings.

The 14 birds used in the study were hand-reared at Vienna Zoo in Austria by the Waldrappteam, an Austrian conservation group that is re-introducing northern bald ibeses to Europe.

Birds fly in a v-formation to help them fly more efficiently, staying aloft while expending as little energy as possible (stock image)

The birds were studied as they flew alongside a microlight on their migration route from Austria to their winter home in Tuscany, Italy.

Lead researcher Dr Steve Portugal, from the Royal Veterinary College, University of London, said: ‘The distinctive V-formation of bird flocks has long intrigued researchers and continues to attract both scientific and popular attention, however a definitive account of the aerodynamic implications of these formations has remained elusive until now.

‘The intricate mechanisms involved in V-formation flight indicate remarkable awareness and ability of birds to respond to the wingpath of nearby flock-mates. Birds in V-formation seem to have developed complex phasing strategies to cope with the dynamic wakes produced by flapping wings.’

When flying in a V formation, the birds’ wing flaps were approximately ‘in-phase’, meaning all the wing tips followed roughly the same path, the scientists found.

This helped each bird capture extra lift from the upwash of its neighbour in front.

Occasional shifts of position within the formation meant that at times birds flew directly one behind the other.

When this happened, the birds altered their wing beats to an out-of-phase pattern to avoid being caught by downwash.