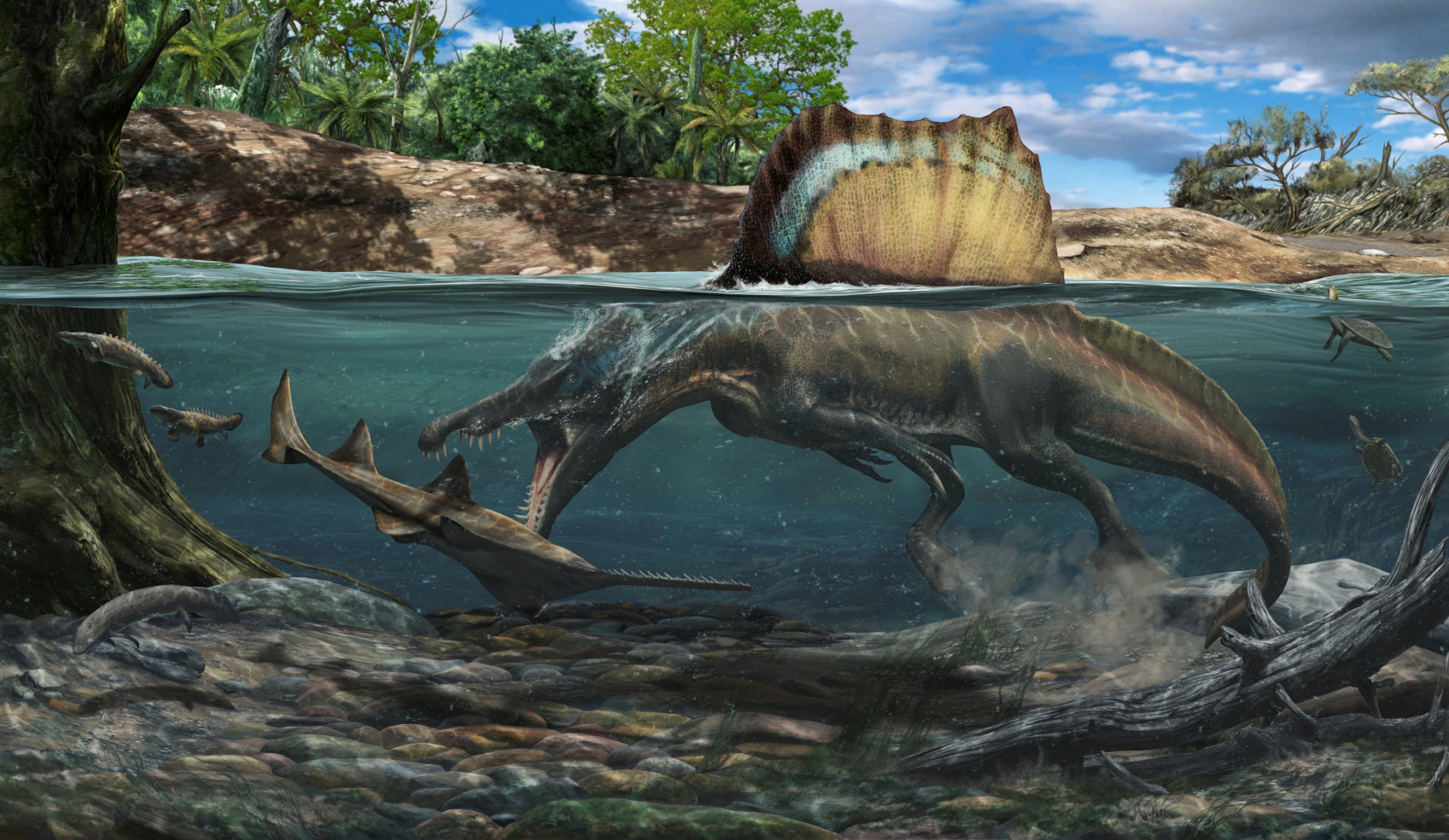 The biggest carnivorous dinosaur that ever lived hunted for prey underwater, according to new research.

Spinosaurus could grow up to 50ft long and weigh 20 tonnes — dwarfing T.rex.

Now an analysis of the marine monster’s bones has found it was adapted for an aquatic lifestyle.

They were dense — just like those of today’s penguins, hippos and alligators.

This provided bouyancy — enabling Spinosaurus and its cousin Baryonyx to submerge themselves to kill.

Meanwhile, another closely related dinosaur called Suchomimus had lighter bones that would have made swimming more difficult.

So it likely waded like a heron instead — or spent more time on land like other dinosaurs.

It lived about 100million years ago, roaming the swamps of North Africa, and belonged to the theropods — carnivores that included T-Rex.

Lead author Dr Matteo Fabbri, of the Field Museum, Chicago, said: ‘The fossil record is tricky — among spinosaurids, there are only a handful of partial skeletons.’

Even animals clearly not shaped for aquatic adaptation, such as the hippopotamus, have very dense bones. The feature often precedes the evolution of more obvious signs like fins or flippers.

The international team scanned 380 bones from extinct and living animals from mammals, crocodiles and birds to marine and flying reptiles.

The hunting technique of Spinosaurus has been debated by palaeontologists for decades. Some have proposed it could swim, while others insisted it was capable only of wading.

Dr Fabbri said: ‘Previous studies have shown that mammals adapted to water have dense, compact bone in their postcranial skeletons.

‘We thought, OK, maybe this is the proxy we can use to determine if Spinosaurids were actually aquatic.’

The researchers put together a dataset of thigh and rib bones cross-sections from 250 land and water-dwelling species. They were compared to fossils from Spinosaurus, Baryonyx and Suchomimus.

Dr Fabbri said: ‘We had to divide this study into successive steps. The first one was to understand if there is actually a universal correlation between bone density and ecology.’

Animals that find food in water have virtually solid bones. Those of land-dwellers look more like doughnuts, with hollow centres.

Dr Fabbri said: ‘There is a very strong correlation. The best explanatory model we found was in the correlation between bone density and sub-aqueous foraging.

‘This means all the animals that have the behaviour where they are fully submerged have these dense bones — and that was the great news.’