‘New type of ultraviolet light’ kills 98% of airborne microbes in a room and could help prevent the next pandemic, scientists claim

A ‘new’ kind of ultraviolet light kills almost all microbes in a room and could help avoid another lethal pandemic, a new study shows.

Researchers say ‘far-UVC’ light emitted from ceiling lamps can kill bacteria, fungi and viruses, including coronavirus, without causing damage to the human skin.

In experiments, far-UVC took less than five minutes to reduce the level of indoor airborne bacteria by more than 98 per cent.

Even as microbes continued to be sprayed into the room, their level remained very low as long as the far-UVC lights were on.

According to the research team, you’d be just as likely to catch a pathogen in a room with far-UVC lamps as in an open outside space with a fresh breeze.

Far-UVC lamps are already commercially available, although a Which? analysis last year warned that some may be shoddy products. 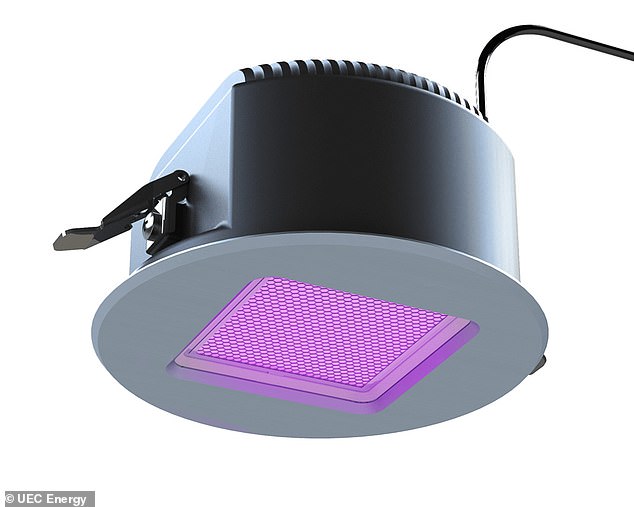 Far-UVC lamps (pictured) are already commercially available. Far-UVC light has been described as a ‘sweet spot’ on the UVC light spectrum because it kills microbes without damaging human cells 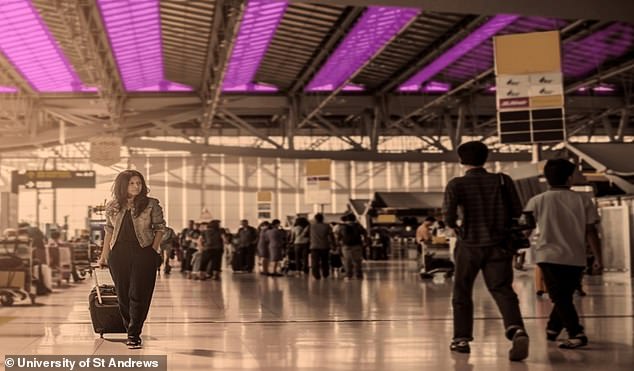 The three types of UV radiation are classified according to their wavelength.

They differ in their biological activity and the extent to which they can penetrate the skin.

The shorter the wavelength, the more harmful the UV radiation.

However, shorter wavelength UV radiation is less able to penetrate the skin.

The UV region covers the wavelength range 100-400 nm and is divided into three bands:

Short-wavelength UVC is the most damaging type of UV radiation.

However, it is completely filtered by the atmosphere and does not reach the earth’s surface.

‘Using this technology in locations where people gather together indoors could prevent the next potential pandemic.

‘Far-UVC light is simple to install, it’s inexpensive, it doesn’t need people to change their behaviour, and above all it’s a safe way to prevent the transmission of any virus, including the Covid virus and its variants, as well as influenza and also any potential future pandemic viruses.’

Ultraviolet light is separated into three classifications depending on wavelength – UVA, UVB and UVC.

UVC, the shortest-wavelength ultraviolet light, is the most germicidal in the UV spectrum, meaning it’s the best at killing germs, but also at damaging human skin.

UVC light has been used for years to help destroy bacteria and viruses in commercial and industrial locations such as hospitals, factories and water treatment plants.

However, conventional UVC light cannot be used directly to destroy airborne viruses in occupied indoor spaces because it is a potential health hazard to the skin and eyes.

It has a wavelength between 207 to 222 nanometers (within the UVC range), efficiently inactivating microbes without harm to exposed human skin.

This means it can’t reach any living cells in the human body. 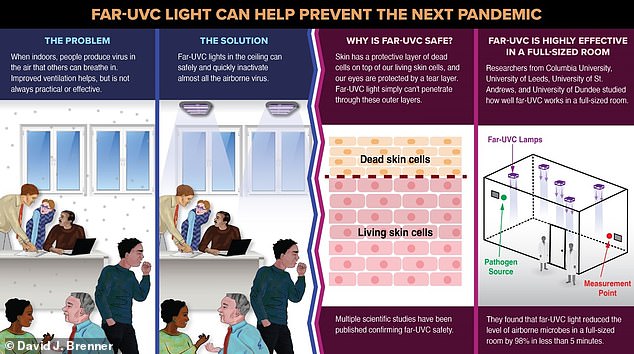 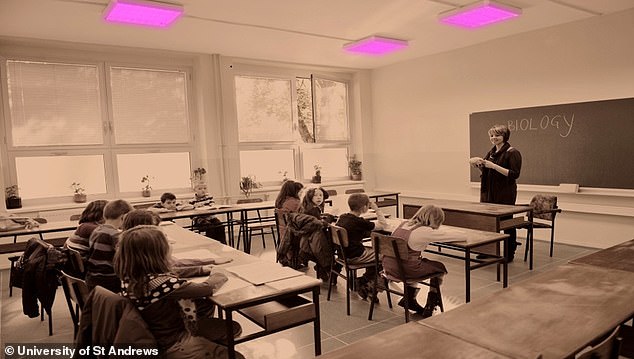 Artist’s impression of how far-UVC light lamps would look in a school classroom. In the experiments, far-UVC took less than five minutes to reduce the level of indoor airborne bacteria by more than 98 per cent

DIFFERENCE BETWEEN UVC AND FAR-UVC

Ultraviolet C (UVC) is a subtype of ultraviolet light, separated from UVA and UVB based on its wavelength.

It is short-wave, germicidal, meaning it inhibits microorganisms, and is completely absorbed by the ozone layer and atmosphere.

Conventional UVC light sources are both carcinogenic and cataractogenic, however.

Far UVC is simply a short wavelength part of the ultraviolet spectrum.

In the past decade, studies around the world have already shown that far-UVC is both efficient at destroying airborne bacteria and viruses and safe for use around people.

But until now these studies had only been conducted in small experimental chambers, not in full-sized rooms mimicking real-world conditions.

For the new study, the team tested far-UVC light in a large room-sized chamber (around 13ft by 10ft by 8ft) with the same ventilation rate as a typical home or office.

During the experiment, a sprayer continuously emitted an aerosol mist of Staphylococcus aureus into the room.

S. aureus is a bacteria that can be deadly to humans if it gets deep into the body, such as the bloodstream, joints, bones, lungs or heart.

This bacteria was chosen because it is slightly less sensitive to far-UVC light than coronaviruses, providing the researchers with a strong model – i.e., if far-UVC was successful at killing S. aureus it would likely do the same to other more sensitive microbes.

When the concentration of microbes in the room stabilized, the researchers turned on commercially available overhead far-UVC lamps.

At an intensity based on the current regulatory limit on far-UVC light exposure, set by the American Conference of Governmental Industrial Hygienists, the far-UVC lamps inactivated more than 98 per cent of the airborne microbes in five minutes.

The low level of viable microbes was maintained over time, even though microbes continued to be sprayed into the room. 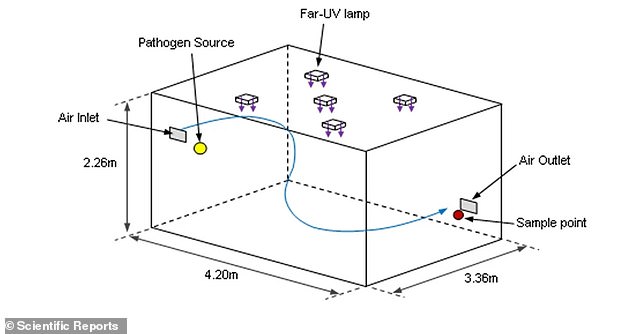 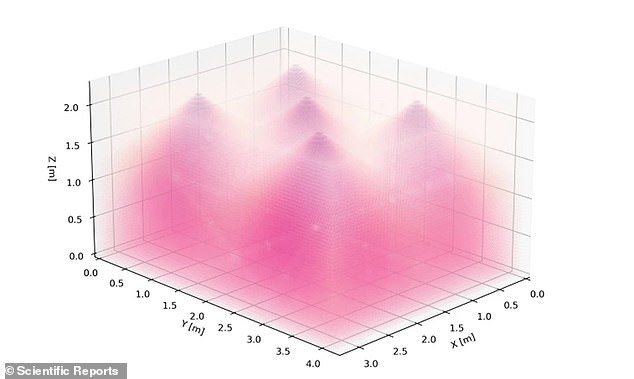 One way to measure ventilation is to figure out how often the air in a space is completely replaced – known as ‘air changes per hour’ (ACH).

In a 30-foot by 30-foot classroom, for example, the air should be replaced at least every 15 minutes, which equals an ACH of 4.

If the air is replaced at least every 10 minutes, there is an ACH of 6, which is better.

In this study, far-UVC lamps produced the equivalent of 184 equivalent air exchanges per hour.

This surpasses any other approach to disinfecting occupied indoor spaces, where five to 20 equivalent air changes per hour is the best that can be achieved practically, according to the study authors.

‘Our trials produced spectacular results, far exceeding what is possible with ventilation alone,’ said author Kenneth Wood at the School of Physics and Astronomy, the University of St. Andrews.

‘In terms of preventing airborne disease transmission, far-UVC lights could make indoor places as safe as being outside on the golf course on a breezy day at St. Andrews.’

Researchers stress that their new research, published today in Scientific Reports, only tested far-UVC light’s effect on one species of bacteria in the air, although it’s already known it’s effective on other microbes including coronaviruses.

Further research will look at its effect on other types of microbes on surfaces in similar sized or even larger rooms.

While far-UVC is described as ‘new’, it was about a decade ago that Columbia scientists proposed far-UVC light would be just as efficient at destroying bacteria and viruses but without the safety concerns of conventional germicidal UVC.

Professor Brenner has already given a TED talk on the potential of far-UVC, which he said can help in the battle against superbugs – bacteria and other microbes that have adapted and evolved in response to modern chemicals designed to kill them.

The World Health Organisation (WHO) estimates that these superbugs will kill 10 million people each year by 2050 – with patients dying because of once harmless infections – and impose a cumulative $100 trillion burden on the global economy.

Because of the way UV light kills microbes, viruses and bacteria cannot develop resistance as they do with vaccines and drug treatments.

HOW DO WE KNOW THAT FAR-UVC LIGHT IS SAFE?

A number of different research groups, including at Columbia University, have performed extensive safety studies with far-UVC light and human skin, mouse skin, and mouse eyes, and all evidence suggesting that far-UVC light has no harmful effects. Examples are:

– A Japanese study on far-UVC safety in mice

– A UK study on far-UVC safety in human skin

National and international safety regulations limit how much UV light can be used in public locations.

These UV limits, established by the American Conference of Governmental Industrial Hygienists and the International Commission on Non-Ionizing Radiation Protection, have been in place for more than 20 years.

Far-UVC lamps are required to conform with these existing safety regulations.