Tiny WORMS could be used to sniff out lung cancer because they can smell molecules in cancerous cells like dogs, study suggests

With their incredible sense of smell, dogs are often used to sniff out various forms of cancer in human breath, blood, and urine.

Now, a new study suggests that tiny worms could also be used in the same way to sniff out lung cancer.

Researchers from Myongji University in Korea conducted lab experiments with the roundworm C.elegans, and found it wriggles its way towards cancer cells by following an odour trail.

Based on the findings, the researchers suggest that a ‘worm-on-a-chip’ device could offer doctors a non-invasive way to detect and diagnose lung cancer at an earlier stage. 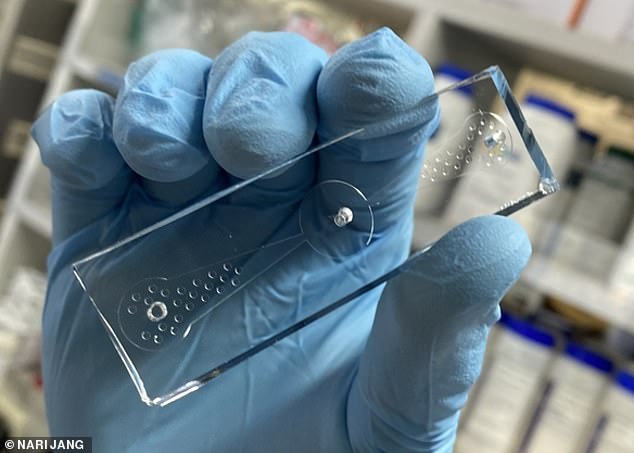 Some species can contain more than 27 million eggs at one time and lay more than 200,000 of them day.

Their body is long and narrow, resembling a tiny thread.

The epidermis of a nematode is not composed of cells like other animals, but instead is a mass of cellular material and nuclei without separate membranes.

This epidermis secretes a thick outer cuticle which is both tough and flexible.

The cuticle is the closest thing a nematode has to a skeleton, and is used as a support and leverage point for movement.

Currently, lung cancer is diagnosed through imaging or biopsies.

However, these methods often mean that tumours aren’t detected at their earliest stages.

While previous research has shown that dogs can be trained to sniff out human cancer, unfortunately canines aren’t practical to keep in laboratories.

In their new study, the researchers set out to understand whether nematodes – tiny worms measuring just 0.04 inches long – could be used to detect cancer like dogs.

‘It’s well known that the soil-dwelling nematode, C. elegans, is attracted or repelled by certain odours, so we came up with an idea that the roundworm could be used to detect lung cancer.’

The team developed a polydimethylsiloxane elastomere chip that had a well at each end connected by channels to a central chamber.

Worms were then placed in the central chamber and left to crawl in either direction.

After an hour, the researchers found that more worms had crawled towards the drop containing lung cancer cells than towards the normal cells.

In a follow-up study, the researchers were able to pinpoint the specific odour molecules that the worms are attracted to in lung cancer cells, including a floral-scented compound called 2-ethyl-1-hexanol.

‘We don’t know why C. elegans are attracted to lung cancer tissues or 2-ethyl-1-hexanol, but we guess that the odors are similar to the scents from their favorite foods,’ explained Nari Jang, co-author of the study.

Based on initial tests, the researchers estimate that the worm-on-a-chip device in its current iteration is about 70 per cent effective at detecting cancer cells.

They now hope to improve on these results by using worms that have previously been exposed to cancer cells and have developed a ‘memory’ of specific odour molecules.

‘We will collaborate with medical doctors to find out whether our methods can detect lung cancer in patients at an early stage,’ Dr Choi added.

The researchers presented their results last week at the spring meeting of the American Chemical Society (ACS).

WHAT IS LUNG CANCER?

Lung cancer is one of the most common and serious types of cancer.

Around 47,000 people are diagnosed with the condition every year in the UK.

There are usually no signs or symptoms in the early stages of lung cancer, but many people with the condition eventually develop symptoms including:

– an ache or pain when breathing or coughing

You should see a GP if you have these symptoms.

There are two main forms of primary lung cancer.

These are classified by the type of cells in which the cancer starts growing.

– Non-small-cell lung cancer. The most common form, accounting for more than 87 per cent of cases.

– The type of lung cancer you have determines which treatments are recommended.

More than four out of 10 people diagnosed with lung cancer in the UK are aged 75 and older.

Although people who have never smoked can develop lung cancer, smoking is the most common cause (accounting for about 72 per cent of cases).

This is because smoking involves regularly inhaling a number of different toxic substances.

Treatment depends on the type of mutation the cancer has, how far it’s spread and how good your general health is.

If the condition is diagnosed early and the cancerous cells are confined to a small area, surgery to remove the affected area of lung may be recommended.

If surgery is unsuitable due to your general health, radiotherapy to destroy the cancerous cells may be recommended instead.

If the cancer has spread too far for surgery or radiotherapy to be effective, chemotherapy is usually used.

There are also a number of medicines known as targeted therapies.

They target a specific change in or around the cancer cells that is helping them to grow.

Targeted therapies cannot cure lung cancer but they can slow its spread.