Deep freeze: New form of ICE discovered that may be common on distant, watery planets

Water is one of the fundamental ingredients for life on Earth and covers around 71 per cent of our planet’s surface, but it is also far more diverse than most of us would think.

Now scientists have discovered a new form of ice that they believe is deep within the Earth’s mantle, and may also be common on distant, watery planets.

It takes the number of solid forms of ice found on Earth so far to 20.

The research could also provide clues as to what form water may take on other planets, where temperatures and pressures are different from those found on our own. 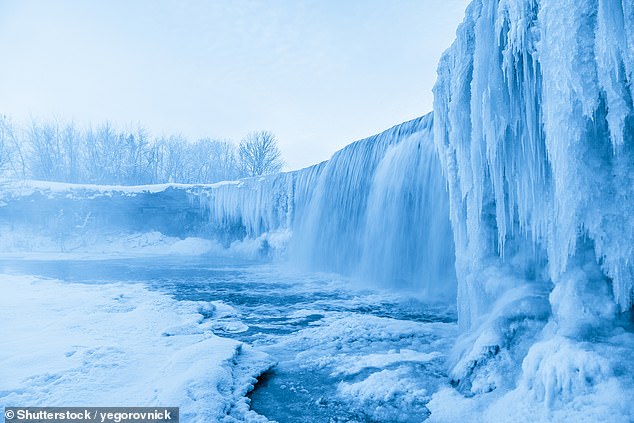 Scientists have discovered a new form of ice that they believe is deep within the Earth’s mantle and may also be common on distant, watery planets (stock image)

HOW DOES ICE FORM?

Water is composed of two hydrogen atoms bound to an oxygen atom.

This gives liquid water many of its unusual properties but also effects the crystal structure it takes when it freezes, too.

Once temperatures drop below freezing point for water, the electrical charges on the molecules cause it to form an open lattice structure, which is why water expands when it freezes.

Its slipperiness is caused when pressure or friction causes a thin layer of ice to melt, reducing the traction on the surface.

A team of scientists from the University of Nevada, Las Vegas, made their discovery after pioneering a new method for measuring the properties of water under high pressure.

The water sample was first squeezed between the tips of two opposite-facing diamonds — freezing into several jumbled ice crystals.

The ice was then subjected to a laser-heating technique that temporarily melted it before it quickly re-formed into a powder-like collection of tiny crystals.

By slowly raising the pressure, and periodically blasting it with the laser beam, the team found the water ice make the transition from a known cubic phase, Ice-VII, to the newly discovered intermediate, and tetragonal phase, Ice-VIIt, before settling into another known phase, Ice-X.

This transition to Ice-X happens at much lower pressures than previously thought.

Zach Grande, a UNLV PhD student, said: ‘While it’s unlikely we’ll find this new phase of ice anywhere on the surface of Earth, it is likely a common ingredient within the mantle of Earth as well as in large moons and water-rich planets outside of our solar system.’

The scientists said their research redefined the properties of water at high pressures, and may also help improve the understanding of water present in the interior of distant planets.

With this aim in mind, Grande and UNLV physicist Ashkan Salamat placed a sample of water between the tips of two round-cut diamonds known as diamond anvil cells, a standard feature in the field of high pressure physics.

They then applied a bit of force to the diamonds to recreate pressures as high as those found at the centre of the Earth.

By squeezing the water sample between these diamonds, scientists drove the oxygen and hydrogen atoms into a variety of different arrangements, including the newly-discovered Ice-VIIt.

Not only did the first-of-its-kind laser-heating technique allow scientists to observe a new phase of water ice, but the team also found that the transition to Ice-X occurred at pressures nearly three times lower than previously thought — at 300,000 atmospheres instead of 1 million.

Salamat said: ‘Zach’s work has demonstrated that this transformation to an ionic state occurs at much, much lower pressures than ever.

‘It’s the missing piece and the most precise measurements on the water at these conditions.’

He added that the research also had implications for the study of the composition of exoplanets.

The experts believe that the Ice-VII phase of ice could exist in abundance in the crust and upper mantle of expected water-rich planets outside of our solar system, meaning they could have conditions habitable for life.

The study has been published in the journal Physical Review B.

WHAT ARE THE 19 OTHER FORMS OF ICE?

Ice Ih – Normal hexagonal crystalline ice. Virtually all ice in the biosphere is ice Ih, with the exception only of a small amount of ice Ic.

Ice Ic – A metastable cubic crystalline variant of ice. The oxygen atoms are arranged in a diamond structure. It is produced at temperatures between 130 and 220 K, and can exist up to 240 K, when it transforms into ice Ih. It may occasionally be present in the upper atmosphere.

Ice II – A rhombohedral crystalline form with highly ordered structure. Formed from ice Ih by compressing it at temperature of 190–210 K. When heated, it undergoes transformation to ice III.

Ice III – A tetragonal crystalline ice, formed by cooling water down to 250 K at 300 MPa. Least dense of the high-pressure phases. Denser than water.

Ice IV – A metastable rhombohedral phase. It can be formed by heating high-density amorphous ice slowly at a pressure of 810 MPa. It doesn’t form easily without a nucleating agent.

Ice V – A monoclinic crystalline phase. Formed by cooling water to 253 K at 500 MPa. Most complicated structure of all the phases.

Ice VIII – A more ordered version of ice VII, where the hydrogen atoms assume fixed positions. It is formed from ice VII, by cooling it below 5 °C (278 K).

Ice XI – An orthorhombic, low-temperature equilibrium form of hexagonal ice. It is ferroelectric. Ice XI is considered the most stable configuration of ice Ih. The natural transformation process is very slow and ice XI has been found in Antarctic ice 100 to 10,000 years old. That study indicated that the temperature below which ice XI forms is −36 °C (240 K).

Ice XII – A tetragonal, metastable, dense crystalline phase. It is observed in the phase space of ice V and ice VI. It can be prepared by heating high-density amorphous ice from 77 K to about 183 K at 810 MPa. It has a density of 1.3 g cm−3 at 127 K (i.e., approximately 1.3 times more dense than water).

Ice XIII – A monoclinic crystalline phase. Formed by cooling water to below 130 K at 500 MPa. The proton-ordered form of ice V.

Ice XIX – Another proton-ordered form of ice VI formed by cooling water to around 100 K at approximately 2 GPa.