Paleontologists say the animal is new to science and could provide an insight into the early evolution of meat-eaters on Earth.

About the size of a bobcat, it would have been a powerful and relatively new kind of hunter, with slicing scissor teeth at the back of its jaw and a downturned bony chin to protect its long upper sabre teeth at the front.

The species, named Diegoaelurus vanvalkenburghae, is one of the earliest known examples of a mammal adopting a cat-like approach to an all-meat diet, according to researchers from the San Diego Natural History Museum (The Nat). 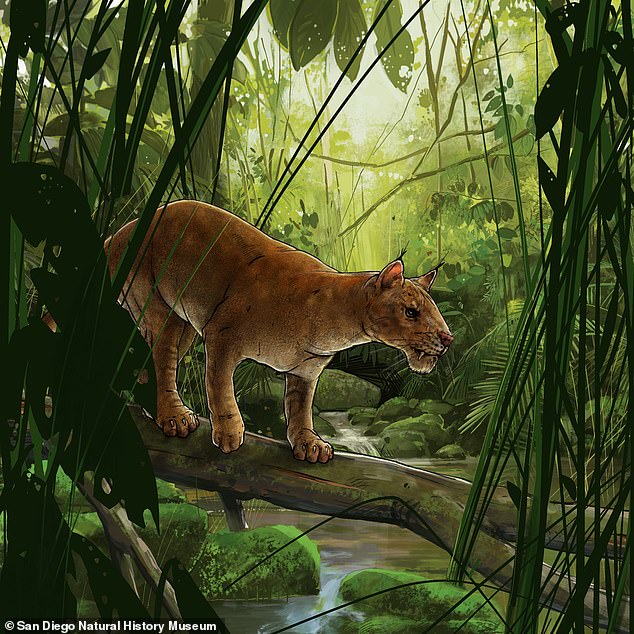 Terrifying: A newly-identified sabre-toothed mammal named Diegoaelurus vanvalkenburghae (pictured in an artist’s interpretation) has been described by scientists. It had huge upper teeth specialised for slicing flesh and would have once roamed California 40 million years ago

Main features: Sabre-teeth in the front of its jaw and slicing scissor teeth called carnassials in the back

Family: The early meat-eating predator is part of a mysterious group of animals called machaeroidines

‘Nothing like this had existed in mammals before,’ said Dr Ashley Poust, postdoctoral researcher at The Nat.

‘A few mammal ancestors had long fangs, but Diegoaelurus and its few relatives represent the first cat-like approach to an all-meat diet, with sabre-teeth in front and slicing scissor teeth called carnassials in the back.

‘It’s a potent combination that several animal groups have independently evolved in the millions of years since.’

He added: ‘Today the ability to eat an all-meat diet, also called hypercarnivory, isn’t uncommon. Tigers do it, polar bears can do it. If you have a house cat, you may even have a hypercarnivore at home.

‘But 42 million years ago, mammals were only just figuring out how to survive on meat alone.

‘One big advance was to evolve specialised teeth for slicing flesh — which is something we see in this newly described specimen.’

The early meat-eating predator is part of a mysterious group of animals called machaeroidines.

Now completely extinct, they were not closely related to today’s living carnivores.

‘We know so little about machaeroidines, so every new discovery greatly expands our picture of them,’ said the study’s co-author Dr Shawn Zack, of the University of Arizona College of Medicine.

‘This relatively complete, well-preserved Diegoaelurus fossil is especially useful because the teeth let us infer the diet and start to understand how machaeroidines are related to each other.’

The animal and its relatives represent a kind of evolutionary experiment, a first stab at hypercarnivory — a lifestyle that is followed today by true cats.

With only a handful of fossil specimens from Wyoming and Asia, the machaeroidines are so poorly understood that scientists weren’t even sure if there were multiple species living within the same time period. 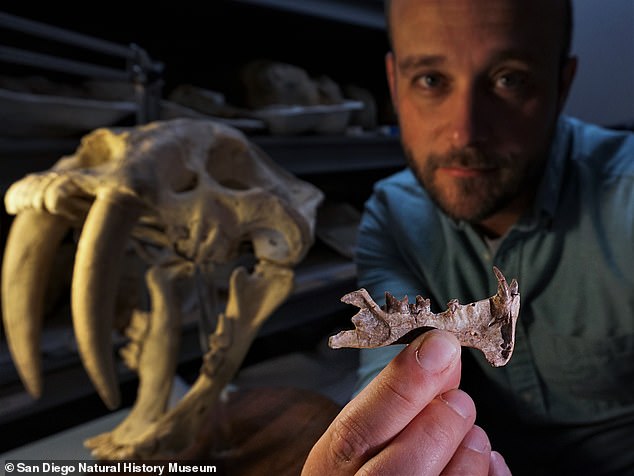 The species, named Diegoaelurus vanvalkenburghae, is one of the earliest known examples of a mammal adopting a cat-like approach to an all-meat diet, according to researchers led by Dr Ashley Poust (pictured), of the San Diego Natural History Museum

‘This fossil finding shows that machaeroidines were more diverse than we thought,’ said Dr Zack.

‘We already knew there was a large form, Apataelurus, which lived in eastern Utah. Now we have this smaller form, and it lived at approximately the same time.

‘It raises the possibility that there may more out there to find.’

In addition to this overlapping existence, Dr Poust believes they may have co-existed with other sabre-toothed animals.

‘Diegoaleurus, though old, is the most recent of these machaeroidine predators. That puts it within striking distance of the time that the next cat-like animals arrived in North America, the nimravids or sabre-tooth false-cats,’ he said.

‘Did these groups ever meet, or even compete for space and prey? We don’t know yet, but San Diego is proving to be a surprisingly important place for carnivore evolution.’

Scientists hope the specimen will provide information about the behaviour and evolution of some of the first mammals to have an exclusively meat-based diet. 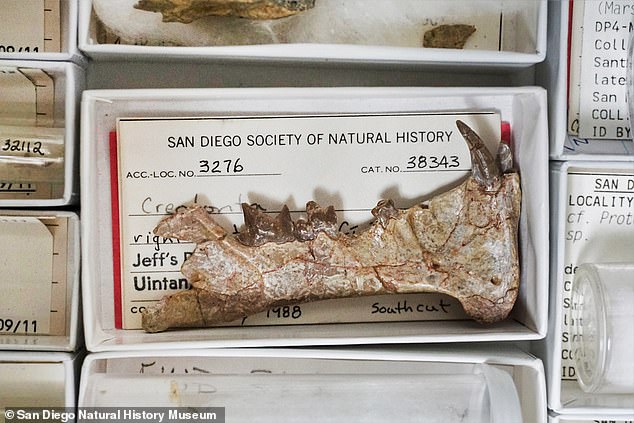 The fossil, which includes a lower jaw and well-preserved teeth, comes from San Diego in southern California, at a location first discovered in the 1980s by a local 12-year-old boy.

Since then, ‘Jeff’s Discovery Site’ has become an important fossil bed within a larger group of rocks called the Santiago Formation.

Fossils of an entire ecosystem have been discovered in these 42 million-year-old rocks, painting a picture of a very different San Diego than the one we know today.

‘Not only was San Diego further south due to tectonic plate movements, but the Eocene was a wetter, warmer world,’ said Dr Poust.

‘The Santiago Formation fossils show us a forested, wet California where tiny rhinos, early tapirs, and strange sheep-like, herbivorous oreodonts grazed under trees while unusual primates and marsupials clung to the canopy above.

‘This richness of prey species would have been a smorgasbord for Diegoaelurus, allowing it to live the life of a specialised hunter before most other mammals.’

The study has been published in the journal PeerJ. 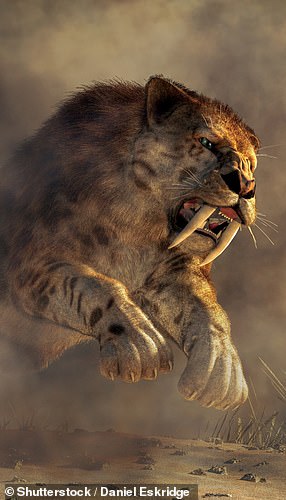 Pictured: an artist’s impression of a Smilodon pouncing

Smilodon is a genus of sabre-toothed cat that lived some 2.5–0.01 million years ago in the forest and bush of the Americas.

It is popularly known as the sabre-toothed tiger, although it is not closely related to modern tigers or other modern cats.

However, it was around the same size as today’s big cats, if built with a more robust frame.

Three species are known in total — S. gracilis, S. fatalis and S. populator — with the majority of specimens having been recovered from the La Brea Tar Pits in Los Angeles, California.

It is thought it hunted by holding its prey still with its sizeable forearms before delivering a killer bite.

Smilodon’s prey would have included large herbivores like bison and camel.