In a new study, researchers in Brazil have complied photos and video of octopuses ‘interacting’ with litter on the ocean floor, taken by scientists and the public.

In all, they compiled images of 24 species of octopuses, all pictured with debris including beer cans, plastic and glass bottles, a battery and a rusted metal pipe.

It’s already well known that octopuses scour the ocean floor for objects that they can hide in, as protection from predators and a place to lay their eggs.

Now, the researchers warn that people who drop litter near the world’s waters could be exposing the animals to fatal toxic compounds. 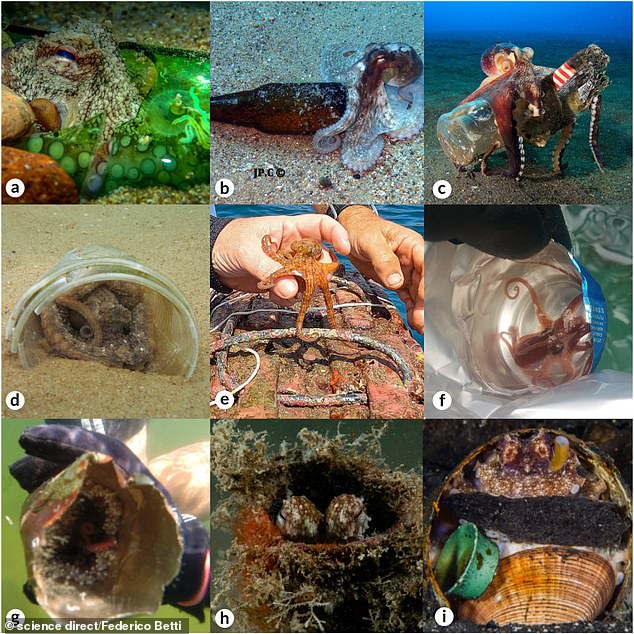 Octopuses are believed to be highly intelligent, more so than any other kind of invertebrates; but their learning capability is still much debated among biologists.

The creatures have been known to break out of aquariums and into others in search of food, and they have even boarded fishing boats and opened holds to eat crabs stored inside.

They are the only invertebrate which has been shown to use tools, with some species retrieving discarded coconut shells and reassembling them to use as shelter.

In laboratory experiments they can be readily trained to distinguish between different shapes and patterns. In several widely contested studies, they have even been shown to practice observational learning.

The new study, which collects a total of 261 photos and videos, was led by researchers at the Federal University of Rio Grande in Brazil.

‘The use of litter as shelter could have negative implications,’ say the authors in their paper, published in Marine Pollution Bulletin.

‘We aimed to elucidate the interactions of octopuses with marine litter, identifying types of interactions and affected species and regions.’

For the study, the team compiled photos and videos through underwater image databases, as well as images from Facebook and Instagram.

They contacted octopus groups, including Cephalopod Appreciation Society and UK Cephalopod Reports, to evaluate the interactions of octopuses with marine litter.

Some photos were snapped by divers, while others were taken using remotely operated vehicles (ROVs).

Although arguably not a much of a pollutant as plastic and glass, coconut shells, timber and food were considered human-originated litter for the study.

Overall, glass objects were present in 41.6 per cent of interactions depicted in the media, and plastic objects in 24.7 per cent.

Octopuses may favour sheltering in glass objects because glass is heavier and more often sinks to the seafloor rather than getting caught in the tides like plastic.

Also, octopuses might prefer the bottleneck designs of glass bottles, as they make it harder for predators to reach into.

The soft-bodied octopus spreads itself over stacked, upright coconut shell ‘bowls’, makes its eight arms rigid, and raises the whole assembly to amble on eight ‘stilts’ across the seafloor.

The only benefit to the octopus’s ungainly maneuver is to use the shells later as a shelter or lair.

Researchers in Australia first documented the behaviour with a pair of coconut shells in a 2009 study.

Julian Finn at Museum Victoria said: It was an extremely comical sight – I have never laughed so hard underwater.’

Researchers also point out that the texture of glass may be more similar than plastic to the internal texture of seashells.

Asia presented the highest number of images, and most records were from 2018 to 2021.

Included in the collection was a photo of the coconut octopus (Amphioctopus marginatus) carrying two plastic items while ‘stilt-walking’.

Stilt-walking is a type of locomotion where the octopus carries its shelter while moving, meaning it essentially has a portable home.

Also featured was an image of octopus found sheltering in a battery, which can cause serious contamination of waters and organisms.

Sadly, Paroctopus cthulu, a newly described species of pygmy octopus from Brazil, has until now only been observed sheltering in litter, especially metal beverage cans.

One of the photos shows a female Paroctopus cthulu octopus inside a beverage can with her eggs. The can was likely thrown overboard by a tourist boat of the Brazilian coast.

The main interaction with litter recorded was sheltering, but other forms of interaction included stilt-walking, burrowing (when octopuses were among or under litter in order to hide) and on top of the litter.

Number of underwater image records of interactions between octopuses and marine litter recovered from worldwide registers over the years (2003−2020). Most records were from 2018 to 2021

Researchers warn that shell removal by humans has increased in the past decades for ornamental purposes, driven by tourism.

This means octopuses are having to rely on other more ubiquitous objects, such as human litter, to act as shelter.

‘It is possible that the negative impacts of litter on octopuses is underestimated due to the lack of available data, and we therefore emphasise that the problem must be more thoroughly assessed.’

A rare glass octopus showing off its see-through skin was spotted by a team of researchers exploring the deepest parts of the Pacific Ocean in 2021.

The incredible creature – whose internal organs are visible through its body with the naked eye – was spotted twice by the expedition near the Phoenix Islands Archipelago.

Known as Vitreledonella richardi, the species of cephalopod has been known to exist since 1918.

However, it has been rarely captured on film due to the extreme levels at which it swims and has only been analyzed sparingly after it was eaten by predators.

Although it has not been studied extensively, experts do know some facts about the glass octopus.