Prehistoric finger painting! Children and babies could be responsible for up to a QUARTER of ancient rock art across Spain, hand analysis reveals

Children and babies could be responsible for up to a quarter of prehistoric rock art, a new study has found.

Researchers think it was often a family-oriented group activity rather than the work of individuals, with hand analysis suggesting that youngsters aged 12 and under were involved in a lot of the 20,000-year-old paintings in caves across Spain.

Most of the children’s painting was done by those aged between three and 10, they said.

The experts from Cambridge University and Spain’s University of Cantabria studied 180 examples of art involving outlines of hands that were made by blowing pigment through a hollow reed or bone.

This revealed that between 20 per cent and 25 per cent of the hands were made by children aged between 2 and 12 years old. 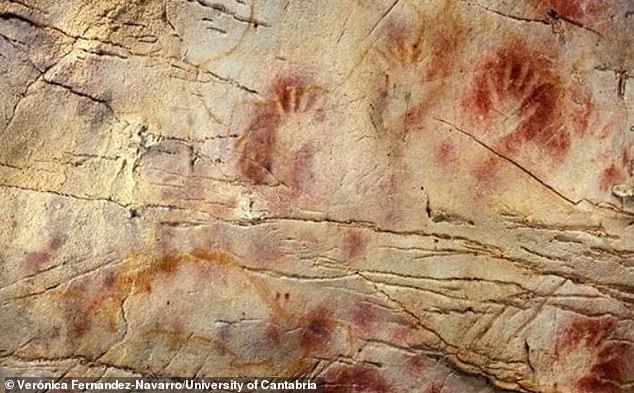 Discovery: Children and babies could be responsible for up to a quarter of prehistoric rock paintings, a new study suggests 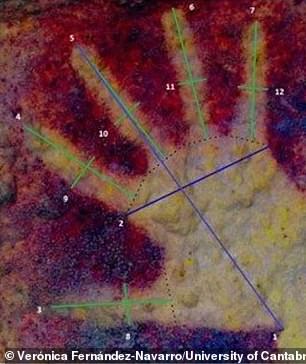 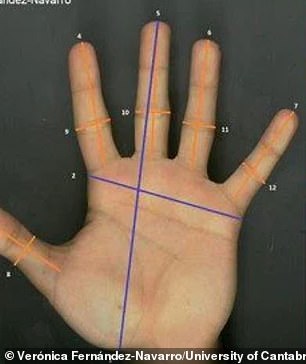 Hand analysis (pictured) led researchers to believe that children aged 12 and under were responsible for a lot of the 20,000-year-old art in caves across Spain

WHAT EXAMPLES OF EARLY HUMAN ART HAVE BEEN FOUND WORLDWIDE?

It seems that humanity and its ancestors have been driven to create patterns, abstract images and representations of the world around them for thousands of years.

The earliest known engraving, a zig-zag pattern, incised on a fresh water shell from Trinil, Java, was found in layers of sediment dated to 540,000 years ago.

Another research article proposed that painted representations in three caves of the Iberian Peninsula were 64,000 years old and therefore produced by Neanderthals.

Lifelike images found at sites such as the Lascaux Cave in south-west France, which date to around 30,000 years ago, are said to demonstrate an ability to depict animal movement superior to that seen today.

In 2018, experts uncovered evidence of art made by humans dating back 73,000 years in an African cave.

That makes the drawing, found in the Blombos Caves site in South Africa, the oldest drawing by Homo sapiens ever found, experts say.

Lead author of the study, Verónica Fernández-Navarro, told the Telegraph: ‘From the real hand to the one on the wall there are always a few centimetres of error, because the silhouette comes out larger.

‘We calculated that error and many more children’s hands came out than we expected.’

She added: ‘It would appear that artistic activity was not a closed activity closely linked to male individuals and the survival of the group, as had been thought until now.’

She said there were outlines of hands of toddlers and babies, neither of whom would have been able to blow the pigment hard enough themselves to make the art.

This means they must have been helped by parents or other carers as part of an activity that ‘served as an element of group cohesion’.

Researchers studied hand art in five caves across Spain, in the regions of Cantabria, Aragon and Extremadura.

Ms Fernández-Navarro said she was now working with researchers in France to analyse cave art there and examine whether the hands could constitute some form of non-verbal language.

She said: ‘In some caves patterns have been found, some of the hands have missing or bent fingers, and the positions repeat in a specific way.

‘We want to find out if it is a code that they knew how to interpret, in the same way that we today interpret a “stop” sign.’

In total there were 545 examples of hands in the paintings.

In their study, the authors wrote: ‘Until recent decades archaeology of childhood has not been in the main focus of the archaeological research, much less the participation of those children in the artistic activity.

‘The present study approaches the palaeodemography of artists in the decorated caves through the paleolithic rock art itself.’

They added: ‘The approximate age of these individuals has been calculated through the biometric analysis of hand stencils in the caves of Fuente del Salín, Castillo, La Garma, Maltravieso and Fuente del Trucho, using 3D photogrammetric models as reference.

‘The results have been compared with a modern reference population in order to assign the Palaeolithic hands to certain age groups.

‘It has been demonstrated the presence of hand stencil motifs belongs to infants, children and juveniles, revealing this stratum’s importance in the artistic activity.’

One of the study’s authors, Diego Garate, of the Cantabria International Institute of Prehistoric Research, said: ‘Our main aim is to gain a much deeper knowledge, not of the art itself that these societies produced, but of the protagonists, the men and women who created these artworks during the Palaeolithic period.’

The study has been published in the Journal of Archaeological Science.

CAVE ART: WORKS DATING BACK 40,000 YEARS HAVE BEEN FOUND

The most famous cave art can be found in Spain and France, but it exists throughout the world.

The famed Upper Palaeolithic cave art of Europe dates back to around 21,000 years ago.

In recent years scholars have recorded cave art found in Indonesia that is believed to be about 40,000 years old – predating the most popular European cave art. 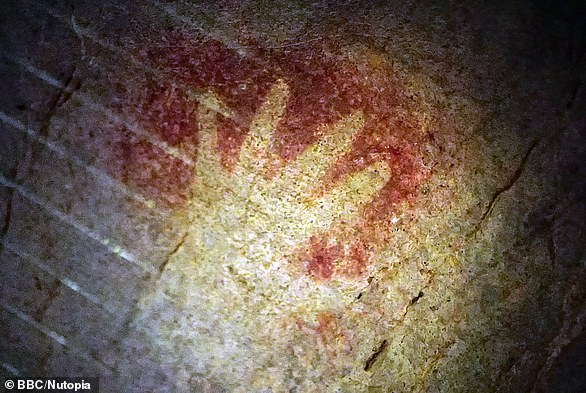 Expert Shigeru Miyagawa authored a study in 2018 which examined cave art to try to shed light on how human language evolved.

He said: ‘Cave art is everywhere. Every major continent inhabited by homo sapiens has cave art.

‘You find it in Europe, in the Middle East, in Asia, everywhere – just like the human language.’