Over the weekend, Dan Brockwell and some of his friends went looking for a share house in Wollongong, or maybe four.

The goal is to create a series of homes that host young, smart and ambitious people who live and work together, posting snippets from their lives on social media.

To that extent, it resembles US influencer houses, a living arrangement made famous by the Hype House that launched the careers of several TikTok megastars and was featured in a Netflix show this year. But rather than emphasising interpersonal drama, beautiful people and viral videos, the Wollongong project is a local outpost of another overseas phenomenon: start-up houses that cater to people in the technology sector building new companies. 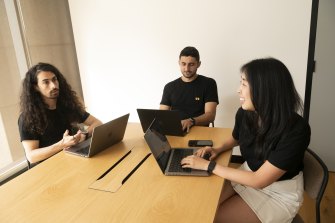 It is called Earlyhome. James Tynan, a principal at venture capital firm Square Peg, sees a younger version of himself living there to surround himself people who reinforce each other’s ambitions. “In a minute,” Tynan says. “Like I would absolutely.”

The houses, for which applications closed on Friday, will be one of the first such experiments in Australia in relatively public shared living. Two friends, Adam Miller, 23, and Sachin Shah, 22, who are into start-up investing have also decided to make their Darlinghurst share house the focus of what they hope will be a growing media brand centred on the interview podcast they co-host.

The fact these experimental projects are going ahead is a testament to how large Australia’s start-up scene has grown, and how quickly. In 2021, the amount of money invested in Australian start-ups trebled from the year before, to more than $10 billion. In some ways Earlyhome is a physical manifestation of Earlywork, its parent company, which has been a beneficiary and driver of the burgeoning start-up scene.

Last week, its founders Brockwell, Jono Herman, and Marina Wu, all 24, told The Sydney Morning Herald and The Age they had received $707,500 from a collection of venture funds, the most prominent of which is Tynan’s employer Square Peg, and individual investors.

The purpose of it is not to fund the houses, which are in the language of start-ups, a “side hustle” and will be paid for by the rent of people who live there. It is to let Brockwell, Herman and Wu work start working full-time on their primary ambition: the creation of big, friendly communities of people in cities around the world that help their members get jobs in technology.

Earlywork, founded as a community in April 2021, is growing at a quick clip. Every young person in Sydney who is into start-ups seems to know its name. About 2200 people are on its instance of the Slack online chat application, just over 4000 subscribe to its newsletter and almost a dozen companies are trialling its new hiring service.

That allows firms such as the international payments company Airwallex, paying in the low hundreds a month to participate, to search jobseekers listed with Earlywork who may not be open to declaring their interest more publicly on LinkedIn.

If they hire a candidate, the fee is about another $1000. That is cheap compared to the $16,000 that fast-growing Australian technology companies can pay for a single referral bonus as they fight for top talent against the pull of Silicon Valley and more traditional corporate careers, like consulting. 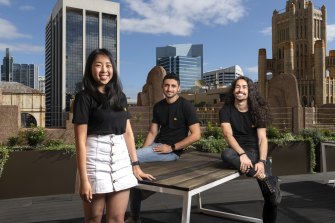 Wu said she had once glorified hustle culture, the startup ideology that venerates overwork, but had burnt out and learned to draw lines.Credit:Rhett Wyman

“We’ve kept a pretty low base to start and throughout this month program we’ll figure out the best pricing model,” says Herman. He holds the thoroughly Generation Z title of “chief handshake officer”, handling the more mundane aspects of the business, such as legal issues.

Wu has the most normal title, chief community officer. She has to manage the difficult task of ensuring that if Earlywork grows to plan, it does not lose the active community that makes it worthwhile.

“We’re actively trying to think about what the sub-communities look like,” Wu says. Part of their planned solution is to put more energy into sub-channels within their larger discussion group. Already there are channels on sustainability, cryptocurrencies, anonymous questions and “f–k-ups anonymous”, for the discussion of failures and lessons learned.

Brockwell, frizzy haired and with a tattoo of Earlywork’s quotation mark logo on his arm, seems an avatar of the group. His title is “chief meme officer”. Beneath the droll label, he runs the company’s content and marketing.

Unlike Wu and Herman, Brockwell will move into one of the Wollongong houses. He is visibly excited about the prospect of giving a physical form to a slice of the community he has helped create online.

It is far too early to tell if the houses will be successful, succumb to the drama that has engulfed some overseas forebears, or end up as normal share houses populated by tech workers.

Miller and Shah, who both work for the consultancy Deloitte, are already in their house, although only just. The toaster is on the floor because of a power problem. The layout is also an issue.

“The reason we… could potentially afford [the house] is because there’s one big floor,” Shah says.“So to get to Adam’s room, you have to walk through mine.”

Brockwell is hoping to find a place that is a little more scenic, close to the surf and bush near north Wollongong. “It’s an experiment,” he says.