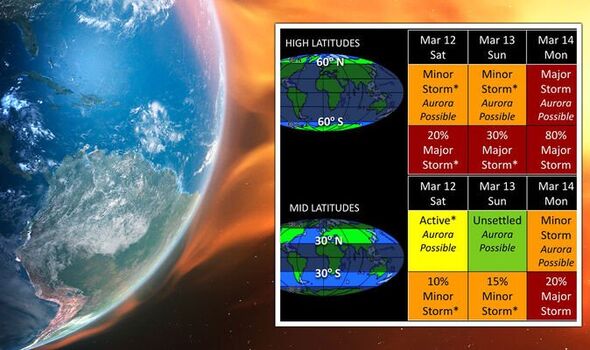 Space weather physicist Dr Tamitha Skov made the prediction this morning that a solar storm will soon hit Earth.

Data from both NASA and the US-based National Oceanic and Atmospheric Administration (NOAA) predicts that the astronomological phenomena will be impacting the planet over the next two weeks.

The NOAA’s 3 day outlook predicts that there is an 80 percent chance of a major storm on Monday, March 14.

Aurora, a beautiful light show in the sky seen in high latitude areas, is expected to be seen further towards the equator than normal during the storm.

There are also expected to be issues for amateur radio and GPS systems, particularly near dawn and dusk.

She added this morning: “Solarstorm & #Aurora 5-day Outlook: Busy week with a triple threat! A a big solarstorm storm is coming sandwiched between a glancing blow from a previous solarstorm & some fast solar wind.”

A relatively weak C-class solar flare blasted from the earth-facing side of the Sun on Thursday last week.

While Dr Tony Phillips of spaceweather.com stated that these flares are usually unremarkable, this one lasted for nearly 12 hours.

Scott Sutherland wrote of the solar flare for theweathernetwork.com: “As this long-duration flare was blasting out energy into space, it was accompanied by the eruption of a cloud of charged solar particles, known as solar plasma cloud, a solar storm, or a coronal mass ejection (CME).”

He added: “Even a glancing blow by a CME is often enough to cause a geomagnetic storm. In this case, though, it appears as though Earth will be affected by the densest part of the cloud.

“That could spark an intense geomagnetic storm, with auroras visible across Canada and even into the northern parts of the United States.”

Geomagnetic storms have been known to cause massive damage to power grids and radio communications, and can cause electrical blackouts.

While Earth’s atmosphere and magnetosphere allow adequate protection against radiation at ground level, astronauts can be subject to potentially lethal radiation poisoning.