Only a FIFTH of people are brave enough to take vigilante action against rule-breakers at work, study suggests

If you see someone breaking the rules at work, do you feel inclined to call them out on it? Vigilantism might just be written into who you are.

A study has found that one in five people adopt a ‘vigilante identity’ where they routinely monitor others’ behaviour – and punish those who don’t follow the rules.

The trait spurs the vigilante to act in certain circumstances where they believe authorities have failed to serve justice, and it bolsters their self-regard when they do.

The self-appointed enforcer may punish others by slandering them on social media, telling them off at work or engage in physical acts like vandalism. 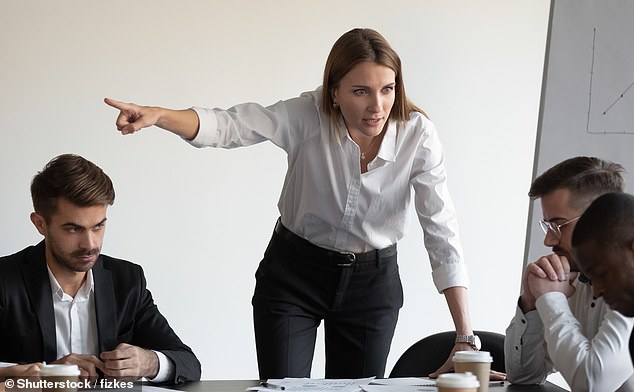 If you see someone breaking the rules at work, do you feel inclined to call them out on it? Vigilantism might just be written into who you are (stock image) 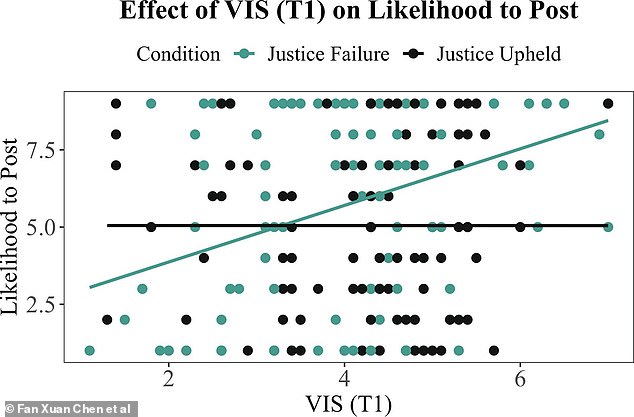 Graph shows the likelihood a participant would post a video on social media of a university instructor making culturally insensitive remarks to a student, against their VIS score. In the scenario of ‘justice failure’, no disciplinary action would be taken against the instructor, but in ‘justice upheld’ the university would release a statement condemning his behavior. As the VIS score of the participant increases, the more likely they would punish the instructor themselves

From Batman to Dexter: Fictional vigilantes

Dexter is a forensic analyst-turned-vigilante serial killer, who targets other murderers who have evaded the justice system

Lisbeth Salander in ‘The Girl With The Dragon Tattoo’

3. Lisbeth Salander, from The Girl With The Dragon Tattoo

Played by Robert De Niro, war veteran and cab driver Bickle is impelled to clear up crime he sees in New York City

‘These are people who see themselves as punishers and monitors of the environment,’ said Fan Xuan Chen, a doctoral candidate in psychology at the University of Illinois Urbana-Champaign.

‘Their responses suggest that they don’t mind punishing the innocent to deter future wrongdoers and are willing to disregard due process.’

The new scale might be useful for screening applicants hoping to work in the police or military, or when evaluating potential jurors, according to the researchers.

It could also be used in recruitment to identify people who may try to go above and beyond their authority.

Chen said: ‘In a criminal context, in law or the legal system, this kind of vigilante is probably an unhealthy presence.

‘Having that kind of identity in a disciplinary setting could be dangerous and problematic, both for the individual and for others.’

No correlation was found between vigilantism and gender or political leaning in the study, published in Organizational Behavior and Human Decision Processes.

Separate studies were also conducted on individuals in New Zealand, India and the US, as well as through online surveys.

Participants self-reported their own findings, and supplemented them with those observed by members of their household and employers.

‘This suggests that the vigilante identity is a recognized presence. In other words, we know vigilantes are around us,’ Chen said.

Those who identified most strongly as a vigilante tended to be more extraverted or outgoing, and thought themselves to be kind and moral.

Those who scored highly on the VIS enjoy keeping order, but also want to have their acts of restoring the norm noticed and appreciated.

The study found they aren’t concerned about punishing innocent people.

The scale cannot tell whether someone will engage in mild, aggressive or violent forms of vigilantism, but if other measures point to them having impulsive or violent tendencies, that could act as a warning of potential harmful behaviour.

Overall, one in five reported an eagerness to monitor others in their environment and punish those they deemed offenders, in the absence of authorities stepping in.

Children as young as five will intervene to stop a peer from breaking the rules, a study suggests.

The study of 376 five to eight-year-old children from societies across the world found that they were willing to challenge peers who broke the rules and that this appears to be a ‘human universal’.

Lead author Patricia Kanngiesser, from the University of Plymouth, said: ‘What is new about this study is that we observed children’s behaviours and travelled worldwide to do so – we didn’t ask children what they intended to do, but measured what they actually did in real-life social interactions.

‘It was also really interesting to see that how the children corrected each other varied by location,’ she added, saying that researchers had been surprised by findings that children from smaller, rural communities protested ‘as much or even more than children from urban settings’.

‘We assumed that, because everyone knows everyone else in small-scale communities, direct interventions would be less common, as people could rely on more indirect ways such as reputation to ensure compliance with rules,’ she said.