Never get stuck with your friend’s share of the tab again! Uber Eats launches Bill Splitting tool that makes it easier to pay for group takeaways

Whether it’s an evening in or dinner at a fancy restaurant, covering the price of your friend’s meal has to be one of the most annoying experiences ever.

Recognising this, Uber has now launched a new bill splitting tool that makes it much easier – and fairer – to order and pay for group takeaways.

When placing an order, Uber Eats users who usually get lumped with paying a massive bill can now opt to select a group order.

Every member of a group then gets a link sent to their phone to pay for their own individual items within the group order.

The new feature should thwart the actions of that one friend who always says they’ll pay you back for their dinner but never does. 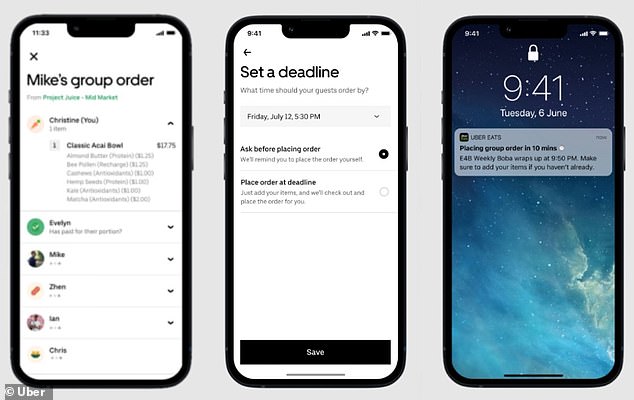 With the new bill splitting tool, Uber Eats users can force their friends to pay for their dinner item up front so they can’t escape paying their share of the bill 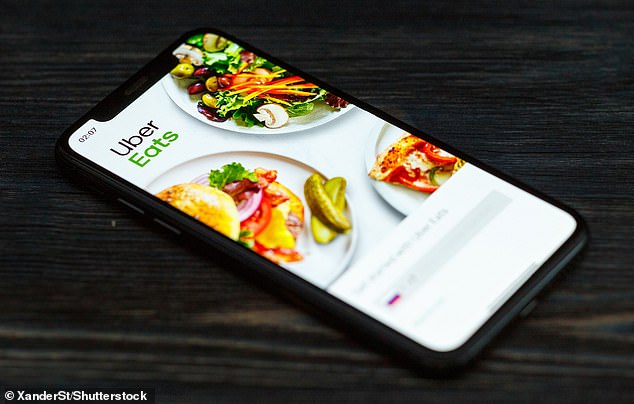 HOW TO PLACE A GROUP ORDER

– On Uber Eats, pick a merchant you want to order from. Select ‘Group order’ in the app (or ‘Start group order’ if on ubereats.com)

– Edit the details of the group order such as delivery address, an optional deadline for everyone to select their items, or an optional spending limit

– Select ‘Invite guests’. This will give you a link to send to everyone in your group

– Add your own items

– Once everyone else has added their items, select ‘View order’ and ‘Go to checkout’

– If the group order is ready, select ‘Lock order & continue’. By locking it, guests can’t edit or add more items. If it’s not ready, select ‘Go back’

Uber has outlined the new feature, which it describes as a first for a delivery app, in a blog post on its website.

‘We know that Uber Eats consumers love bringing people together,’ the post reads. ‘We also know that they don’t like the financial responsibility of ordering for everyone. We get it.

‘Now, for the first-time ever on a delivery app, anyone can create a group and allow individuals to order from the same restaurant and pay for whatever they’d like.’

Usually on a food delivery app, when someone is making a single order to cater for multiple people, they (‘the host’) have to pass their phone around so people can choose the dish they want.

The host is then the one who has to pay the entire bill, meaning they have to rely on the decency of their friends to pay them back – which doesn’t always happen.

With the new tool, Uber Eats users can instead start a group order on the app, by going to a restaurant’s page, tapping three dots in the corner and then selecting ‘group order’.

They can then invite group members from their phone’s contacts, who will receive a link via text to choose and pay for the food they want.

Group members will have to pay for their individual food items before the order can be placed.

Uber points out that as all the individual food items are being ordered together, they won’t all arrive at the chosen address separately.

Uber Eats can officially be described as out of this world after the firm announced that it had sent an order to the International Space Station (ISS).

The company teamed up with Yusaka Maeawa, the Japanese entrepreneur who traveled to the ISS, to hand deliver canned Japanese dishes to astronauts.

The delivery was made on December 11 at 9:40am ET having traveled 248 miles and eight hours and 34 minutes since Maezawa’s departure from Earth.

As part of the tool, the host also has the option to set a deadline for everyone to select their items.

Deadlines can be set to a precise time (e.g. March 10 at 17:30), up to seven days in advance, giving the rest of a group plenty of time to get their order in for future events like group lunches at work.

It’s unclear whether group members will get another chance to place their order if they miss the deadline. MailOnline has contacted Uber Eats for more information.

The bill splitting tool is optional, as there are of course people who are generous enough to pay for all their friends’ meals.

If users are feeling generous, they have the option to pay for everyone but set a spending limit so their friends don’t get too carried away.

The only potential problem is that group members who receive the text will have to download the Uber Eats app if they haven’t already, which could lead to some creative excuses from the cheapskates – such as ‘I don’t own a smartphone’.

Uber Eats was launched by San Francisco-based ride-sharing giant Uber in 2014 and is operational in more than  6,000 cities across 45 countries.

Last year, the service gave users the ability to simply send a food emoji to order their favourite dish, whether it’s pizza, sushi or a burrito.

Uber said the feature is useful for people on holiday, or looking to find something quickly while on their way home from work.

Uber Eats and Deliveroo may also soon have to content with new opposition in the market – from Chinese video sharing platform TikTok.

In December, it was revealed TikTok is working on a new service called TikTok Kitchen, which will serve up dishes that first came to prominence on the app, such as baked feta pasta, corn ribs and ‘pasta chips’.

FETA PASTA, CORN RIBS AND ‘PASTA CHIPS’: TIKTOK TAKES ON UBER EATS AND DELIVEROO WITH THE LAUNCH OF ‘TIKTOK KITCHEN’

TikTok is taking on Uber Eats and Deliveroo with a new food delivery service called TikTok Kitchen that has menu items based on viral videos.

Set to launch in the US in spring 2022, TikTok Kitchen will let customers order dishes that were originally created by TikTok users in their short video posts. 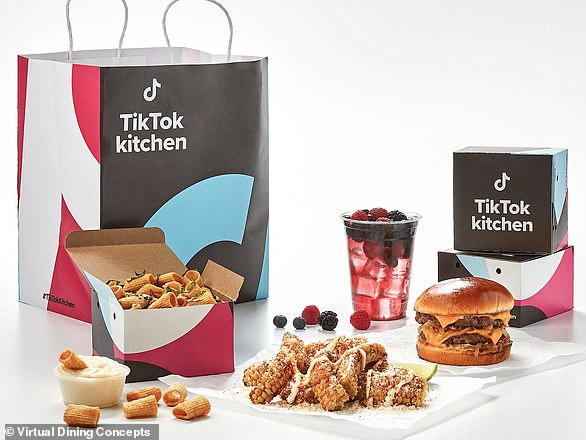 TikTok Kitchen will be a ‘virtual restaurant’ that serves customers exclusively by delivery and pick-up from orders placed online and over the phone.

TikTok has teamed up with Virtual Dining Concepts, an Orlando, Florida based marketing firm, for the service.