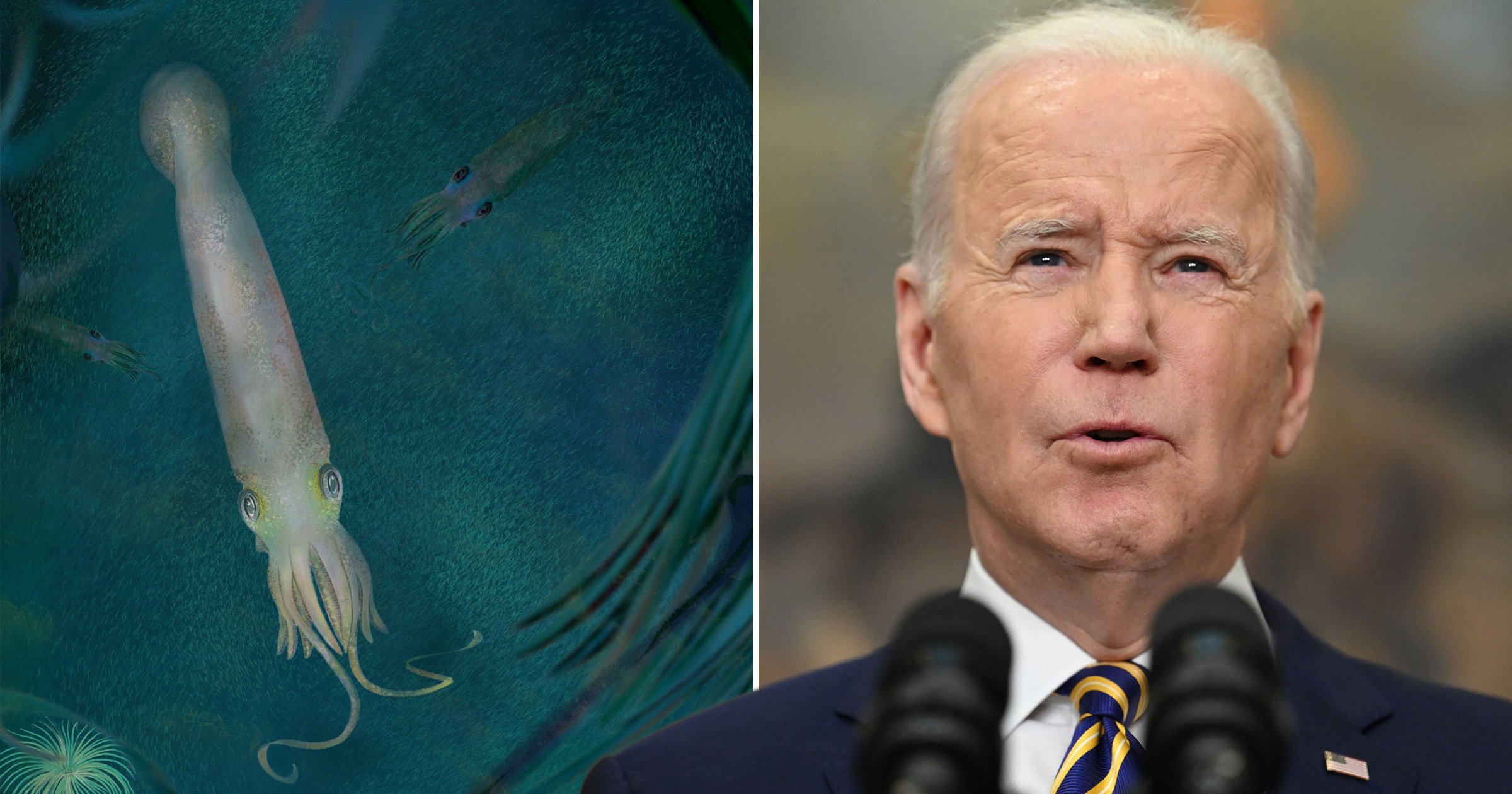 A weird prehistoric squid with ten arms has been named after US President Joe Biden.

The creature is the oldest ancestor of cephalopods – which also includes the octopus.

Syllipsimopodi bideni was armed with two more limbs than its descendants today and experts say it roamed the oceans 328 million years ago.

Additional appendages would have made it a more efficient predator, explained the team at the American Museum of Natural History in New York.

The species was unearthed at the Mississippian Bear Gulch in Montana – one of the best preserved fossil sites in the world.

It was a primitive vampire squid. They do not suck or drink blood but have dark skin that connects the arms – resembling a cape.

The discovery sheds fresh light on evolution – pushing back the age of the group by nearly 82 million years.

Lead author Dr Christopher Whalen said: ‘This is the first and only known vampyropod to possess ten functional appendages.’

The paper was submitted for publication in Nature Communications around the time of the 79 year-old US president’s inauguration.

Dr Whalen said: ‘I wanted to somehow acknowledge the moment in a way that was more positive and forward-looking.

‘I was encouraged by the plans President Biden put forward to counter anthropogenic climate change, and his general sentiment that politicians should listen to scientists.’

Vampyropods are the ancestors of vampire squid and octopae. Their origins are unclear.

Modern descendants have eight arms and two big eyes – enabling them to survive in pitch black waters near the bottom of the ocean.

Octopae and squid can reach 45 and 60 feet long respectively – and weigh half a tonne. However, S. bideni was less than five inches showing they started out small – before becoming very big.

Its remains are exceptionally important. The soft-bodied nature of cephalopods mean they rarely fossilise.

‘It is not inconceivable it might have used its sucker-laden arms to pry small ammonoids out of their shells or ventured more inshore to prey on brachiopods, bivalves or other shelled marine animals.’

S. bideni was dug up in the 1980s and donated to the Royal Ontario Museum in Canada where it has resided ever since – without previously being described.

After scanning the specimen Dr Whalen and Prof Landman realised it was a completely new genus – and the oldest cephalopod on record.

It corroborates previous arguments that their common ancestor had ten arms.

Dr Whalen said: ‘The arm count is one of the defining characteristics separating the 10-armed squid and cuttlefish line from the eight armed octopus and vampire squid line.

‘We have long understood that octopuses achieve the eight arm count through elimination of the two filaments of vampire squid, and that these filaments are vestigial arms.

‘However, all previously reported fossil vampyropods preserving the appendages only have 8 arms.

‘So this fossil is arguably the first confirmation of the idea that all cephalopods ancestrally possessed ten arms.’

Two of S. bideni’s arms appear to have been elongated relative to the other eight. Its torpedo-shaped body is reminiscent of today’s squids.

The genus name is Greek for ‘prehensile foot’ because it is the oldest known cephalopod to develop suckers.

They allowed the arms – modifications of the molluscan foot – to better grasp prey and other objects.

Joe Biden was inaugurated on 20 January last year. He is the 46th president of the United States.

A host of strange animals have been named after his predecessors – including the tiny moth Neopalpa donaldtrumpi. The insect’s yellow-and-white crown bore a striking resemblance to Donald J. Trump’s distinctive coiffure.

Baracktrema obamai is a species of flatworm that is meant to honour Barack Obama.

Others include the beaded darter Etheostoma clinton after Bill Clinton and the wasp Heterospilus reagani after Ronald Reagan.