Waitrose and Muller will SCRAP the blue, green and red lids on milk bottles in favour of clear tops that can be recycled into food-grade packaging

Whether you’re a semi-skimmed fan or a whole milk drinker, it’s likely you spot your milk on the supermarket stand based on the colour of the lid.

But if you shop at Waitrose, you’ll have to start peering a bit closer, as the firm has announced that it’s ditching its coloured lids in favour of clear tops.

Waitrose has partnered with Muller on the move, which will mean the bottle tops can be recycled into food-grade packaging.

Karen Graley, Packaging Innovation lead at Waitrose said: ‘As food businesses, we need to do more to protect our planet from unnecessary plastic waste so we’re delighted to be involved in this trial.’ 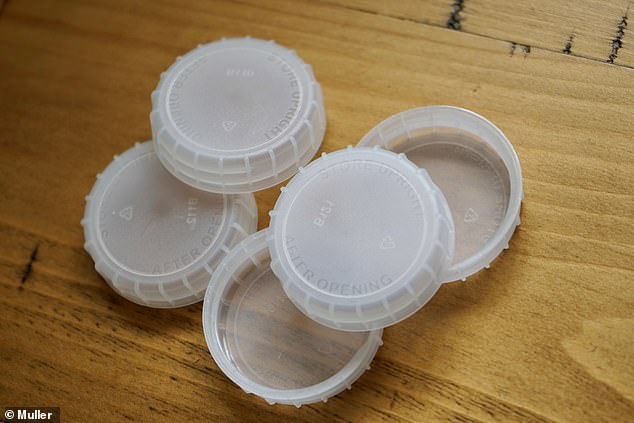 Waitrose has announced that it’s ditching its coloured lids in favour of clear tops, which can be recycled into food-grade packaging

rHDPE is a plastic made from recycled High Density Polythene – a hard and impact resistant plastic with a strong resistance to many chemicals.

Following use HDPE is sent to a recycling plant where it is sorted, cleaned and broken down into pellets or flakes.

These rHDPE pellets or flakes are then reconstituted into rHDPE plastic.

rHDPE, as a recycled plastic can then be used in the manufacture of products including non-food containers such as bleach bottles, crates, pipes, flower pots, gardening tools, rope, and toys.

However, clear caps can be recycled into high density polyethylene (rHDPE), which can then be used for other packaging.

Liam McNamara, Commercial Director at Müller Milk & Ingredients said: ‘Everyone is thinking more about what they buy, the nutritional benefits, the value it represents and the packaging used.

‘We want to be the partner of choice for our customers, we recognise the commitments they are making in this area, and following a successful trial period, then this is another step we can offer.

‘As the first dairy company in the UK to trial clear caps on fresh milk, we are working hard to innovate and lead in issues that are not only important for customers, but for consumers too.

‘In an industry that needs access to more rHDPE, we are really excited to collaborate with Waitrose across all of their shops and trial this additional solution.

‘Our fresh milk bottles already contain up to 40 per cent recycled material, but with access to more, we can partner with our customers to increase this further.

‘But we will not stop there, we are also looking at ways to add recycled content into our clear-caps.’

Ahead of the trial, Muller conducted research to see how shoppers would feel about the cap change.

It found that just over half of all shoppers look for the colour of milk caps when selecting their milk in store, while others either use the different coloured labels, remember the previous location in the fridge or use the fixture signage.

However, 80 per cent of shoppers said they’d be happy to choose a bottle of milk with a clear cap, if it meant the plastic could be recycled.

Of 30 billion plastic bottles used by UK households each year, only 57 per cent are currently recycled.

With half of these going to landfill, half of all plastic bottles that are recycled go to waste.

This is largely due to plastic wrapping around bottles that are non-recyclable.

Bottles are a major contributor to the increasing amount of plastic waste in the world’s oceans.

Researchers warned eight million tonnes of plastics currently find their way into the ocean every year – the equivalent of one truckload every minute.

At current rates, this will worsen to four truckloads per minute in 2050 and outstrip native life to become the largest mass inhabiting the oceans.

An overwhelming 95 per cent of plastic packaging – worth £65 – £92billion – is lost to the economy after a single use, the Ellen MacArthur Foundation report stated.

And available research estimates that there are more than 150 million tonnes of plastics in the ocean today.

Plastic pollution is ruining the ecosystems of the world, both marine and terrestrial. It litters shorelines, snags animals and suffocates entire populations of animals

So much plastic is dumped into the sea each year that it would fill five carrier bags for every foot of coastline on the planet, scientists have warned.

More than half of the plastic waste that flows into the oceans comes from just five countries: China, Indonesia, Philippines, Vietnam and Sri Lanka.

The only industrialized western country on the list of top 20 plastic polluters is the United States at No. 20.

The US and Europe are not mismanaging their collected waste, so the plastic trash coming from those countries is due to litter, researchers said.

While China is responsible for 2.4 million tons of plastic that makes its way into the ocean, nearly 28 percent of the world total, the United States contributes just 77,000 tons, which is less than one percent, according to the study published in the journal Science.