Is THIS the key to turning back the clock? Scientists successfully REVERSE ageing in mice using cellular ‘rejuvenation’ technique – and say it could work in humans too

In a promising step towards eternal youth, scientists have reversed the ageing process in middle-aged and elderly mice using a cellular ‘rejuvenation’ technique.

After injecting these molecules into mice of various ages, the animals’ kidneys and skin showed promising signs of rejuvenation, while their skin cells had a greater ability to proliferate and were less likely to form permanent scars.

Researchers say their ‘safe’ treatment could one day help humans wind back their biological clock, lowering risks of cardiovascular disease and cancer.

According to the findings, a treatment period of seven to 10 months may be required to stave off the unwanted side effects of ageing. 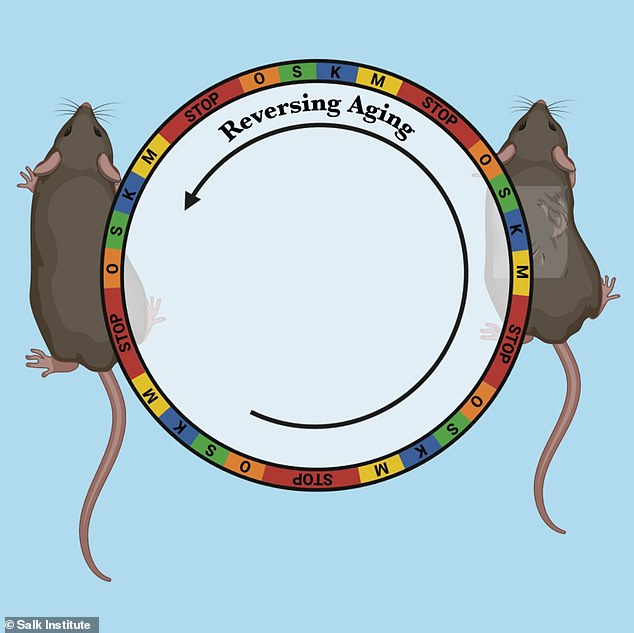 As organisms age, every cell in their bodies carries a molecular clock that records the passage of time. Cellular rejuvenation therapy can safely reverses signs of ageing in mice

EPIGENETICS AND THE YAMANAKA FACTORS

As organisms age, every cell in their bodies carries a molecular clock that records the passage of time.

Cells isolated from older people or animals have different patterns of chemicals along their DNA – called epigenetic markers – compared to younger people.

Scientists know that adding a mixture of four reprogramming molecules to cells (the Yamanaka transcription factors; Oct4, Sox2, Klf4 and cMyc) can reset these epigenetic marks to their original patterns.

‘The technique is both safe and effective in mice,’ said Juan Carlos Izpisua Belmonte, co-corresponding author and a professor at the Salk Institute, San Diego, California.

‘We are elated that we can use this approach across the life span to slow down ageing in normal animals.

‘In addition to tackling age-related diseases, this approach may provide the biomedical community with a new tool to restore tissue and organismal health by improving cell function and resilience in different disease situations, such as neurodegenerative diseases.’

Dr Yamanaka discovered that by adding the four gene-regulating proteins to cells they could be ‘reprogrammed’ to return to a younger and far more adaptable form, so-called ’embryonic stem cells’.

Embryonic stem cells have the ability to become all cell types of the body because they are pluripotent – i.e. they can give rise to many different cell types.

In 2016, Izpisua Belmonte’s lab at the Salk Institute reported for the first time that they could use the Yamanaka factors to counter the signs of aging and increase life span in mice with a premature ageing disease.

‘However, the effects of longer-term partial reprogramming in physiologically ageing wild-type mice are unknown,’ the authors point out in their new study.

Stem cells are special human cells that have the ability to develop into many different cell types, from muscle cells to brain cells.

In some cases, they also have the ability to repair damaged tissues.

Embryonic stem cells can become all cell types of the body because they are pluripotent – they can give rise to many different cell types.

Adult stem cells are found in most adult tissues, such as bone marrow or fat but have a more limited ability to give rise to various cells of the body.

Meanwhile, induced pluripotent stem cells (iPSCs) are adult cells that have been genetically reprogrammed to be more like embryonic stem cells.

To explore this, the team tested variations of the cellular rejuvenation approach in healthy animals as they aged, over long periods.

One group of mice received regular doses of the Yamanaka factors from the time they were 15 months old until 22 months, approximately equivalent to age 50 through 70 in humans.

‘What we really wanted to establish was that using this approach for a longer time span is safe,’ said study author Pradeep Reddy, also at the Salk Institute.

‘Indeed, we did not see any negative effects on the health, behaviour or body weight of these animals.’

Compared to control animals, there were no blood cell alterations or neurological changes in the mice that had received the Yamanaka factors. There were also no cancers in any of the groups.

When the researchers looked at normal signs of ageing in the animals that had undergone the treatment, they found that the mice resembled younger animals.

In both the kidneys and skin, the epigenetics of treated animals more closely resembled epigenetic patterns seen in younger animals.

To find out whether reprogramming can reduce tissue fibrosis – the overgrowth, hardening, or scarring of tissues – the team analysed tissue accumulation in a skin wound after healing. 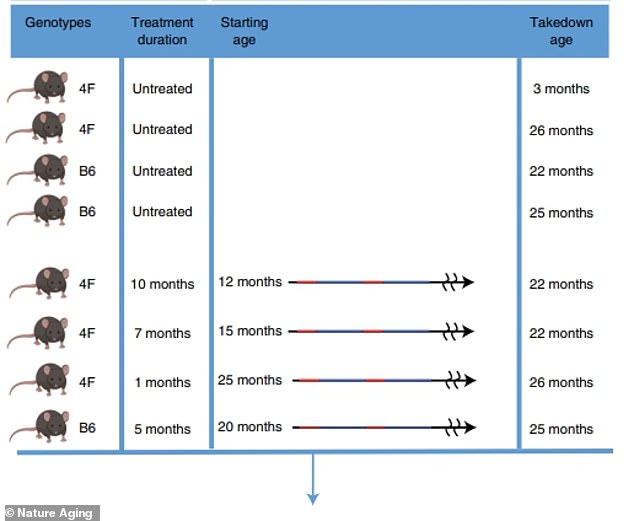 In the study, the team tested variations of the cellular rejuvenation approach in mice as they aged. One group of mice received regular doses of the Yamanaka factors from the time they were 15 months old until 22 months, about equivalent to age 50 through 70 in humans. Another group was treated from 12 through 22 months (age 35 to 70 in humans) while a third group was treated for just one month at age 25 months (age 80 in humans)

Moreover, metabolic molecules in the blood of treated animals did not show normal age-related changes.

What’s more, when the treated animals were analysed midway through their treatment, the effects were not yet as evident.

This suggests that the treatment is not simply pausing ageing, but actively turning it backwards – although more research is needed to differentiate between the two. 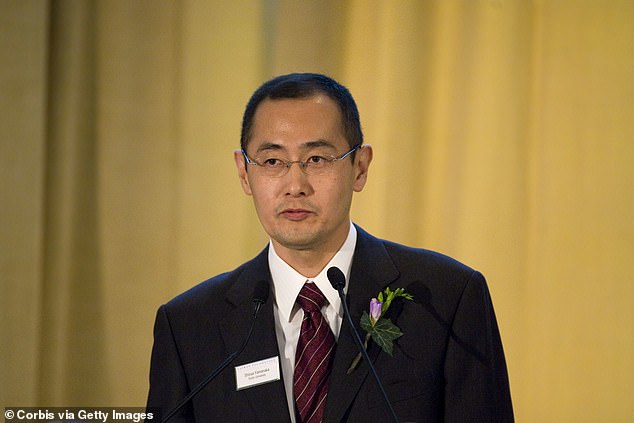 The team is now planning future research to see how specific molecules and genes are changed by long-term treatment with the Yamanaka factors, as well as developing new ways of delivering the factors.

‘At the end of the day, we want to bring resilience and function back to older cells so that they are more resistant to stress, injury and disease,’ said Reddy.

‘This study shows that, at least in mice, there’s a path forward to achieving that.’

The study has been published in Nature Aging.

An exercise ‘sweet spot’ found to reverse cognitive decline in mice could one day be used to help people living with dementia, a new study suggests.

The new study was led by researchers at the Queensland Brain Institute (QBI), the University of Queensland, Australia.