A new Earth? Planet forming 444 light years away contains large organic molecule that is a precursor for the creation of life, astronomers claim

A ring of dust, gas and ice 444 light years from the Earth has been found to contain a large organic molecule, that could one day go on to form life.

Astronomers discovered the chemical, known as dimethyl ether, a key building block of life, inside the planet forming disk around the young star IRS 48.

Over time, dimethyl ether goes on to form prebiotics, including amino acids and sugars, that are the foundations for life on planet Earth, according to the team from Leiden Observatory in the Netherlands, who made the remarkable discovery.

The findings suggest these large molecules may be present in planets as they form, with the world developing around them as the dust, gas and ice come together.

Dimethyl ether is made up of nine atoms, making it the largest complex organic molecule discovered within a planet forming disk to date, the team said.

Finding such a chemical early in the formation process increases the chances life has evolved elsewhere in the universe, they said, adding it ‘could be widespread’. 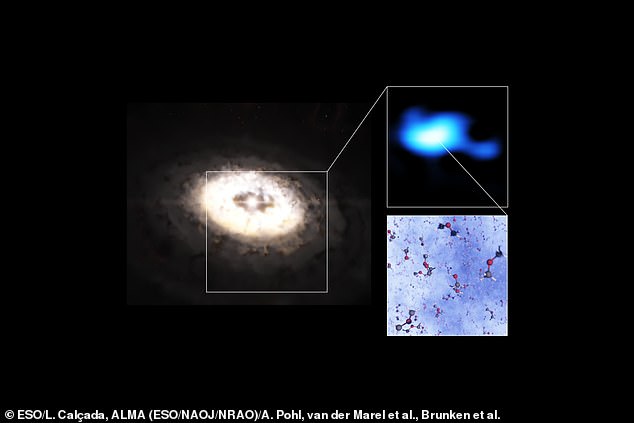 The disk contains a cashew-nut-shaped region in its southern part, which traps millimetre-sized dust grains that can come together and grow into kilometre-sized objects like comets, asteroids and potentially even planets

Known as Oph-IRS 48, this star is in the constellation of Ophiuchus, and has a disk that has been widely studied by astronomers, revolutionizing our understanding of how planets form – and likely mirroring how the Earth formed 4.5 billion years ago.

Previously, other, smaller organic molecules such as formaldehyde have been found within the disk. Prompting researchers to see what else was hiding in the dust.

Dimethyl ether is an organic molecule commonly seen in star-forming clouds, but had never before been found in a planet-forming disc.

The researchers also made a tentative detection of methyl formate, a complex molecule similar to dimethyl ether that is also a building block for even larger organic molecules.

‘From these results, we can learn more about the origin of life on our planet and therefore get a better idea of the potential for life in other planetary systems,’ says Nashanty Brunken, a Master’s student at Leiden Observatory. 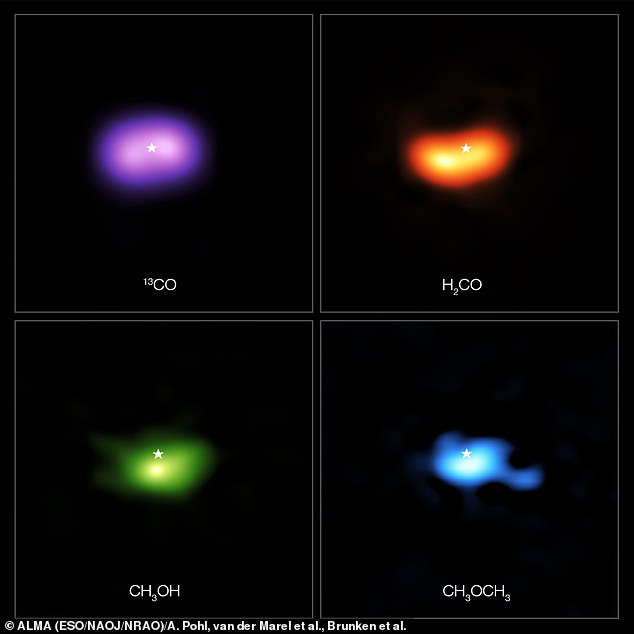 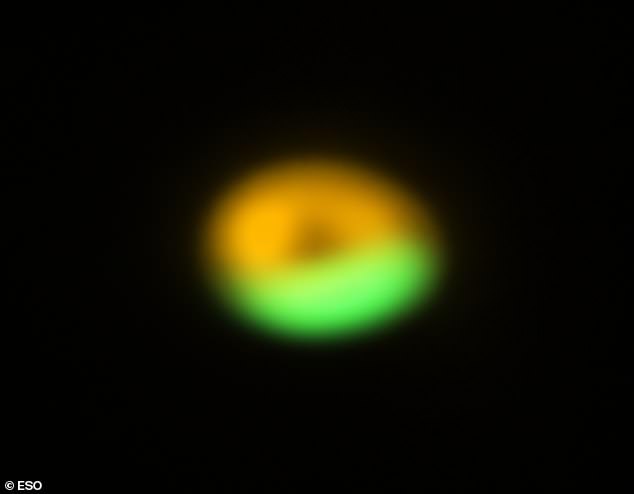 ‘It has been seen before in the cold clouds in which stars are forming, but not yet in an environment where planets are forming.

‘This means that such molecules may end up on the planets directly as they form.

Dimethyl ether is a precursor molecule to other organic compounds.

Also known as methoxymethane, is the organic compound with the formula CH3OCH3, simplified to C2H6O.

It is the simplest form of ether and is a colorless gas, that has proved useful as an aerosol propellant.

Over time, dimethyl ether goes on to form prebiotics, including amino acids and sugars, that are the foundations for life on planet Earth.

It has a number of practical uses as a molecule, including as a substitute for propane in LPG and in diesel engines.

It is relatively non-toxic, although highly flammable, and was the first refrigerant.

‘The molecule is particularly important as it is a ‘complex organic molecule’, which is the starting point of large molecules that are the building blocks of life through further chemical reactions.’

IRS 48, found in the southern sky when viewed from Earth, includes an symmetric, cashew-nut-shaped ‘dust trap’, that mirrors the best theories of planet formation.

Large numbers of millimetre-sized icy particles clump together and grow into comets, asteroids – and even planets, forming within the extremely cold environments before the stars themselves are born.

Fledgling worlds can arise out of the rotating balls that develop around a new born sun, within these dust traps, and the findings suggest the molecules of life are there from the very beginning, rather than arriving on a comet or asteroid.

Co author Dr Alice Booth said: ‘It is really exciting to finally detect these larger molecules in disks. We thought it might not be possible to observe them.’

They only become detectable when heating from IRS 48 causes the ice to turn from a solid to a gas, freeing the molecules, Dr Booth explained.

‘What makes this even more exciting is that we now know these larger complex molecules are available to feed forming planets in the disk. This was not known before as in most systems these molecules are hidden in the ice.’

The study suggests other COMs may also be lurking within this, and similar planetary disks surrounding very young stars.

‘We are incredibly pleased that we can now start to follow the entire journey of these complex molecules from the clouds that form stars, to planet-forming discs, and to comets,’ explained Dr van der Marel: 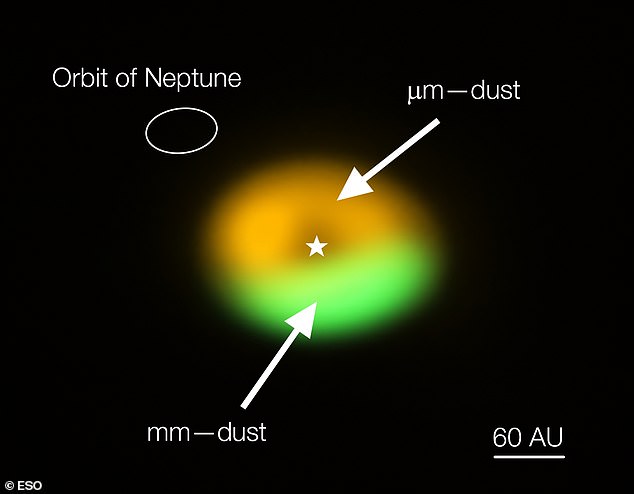 Annotated image from the Atacama Large Millimeter/submillimeter Array (ALMA) showing the dust trap in the disc that surrounds the system Oph-IRS 48. The dust trap provides a safe haven for the tiny dust particles in the disc, allowing them to clump together and grow to sizes that allow them to survive on their own 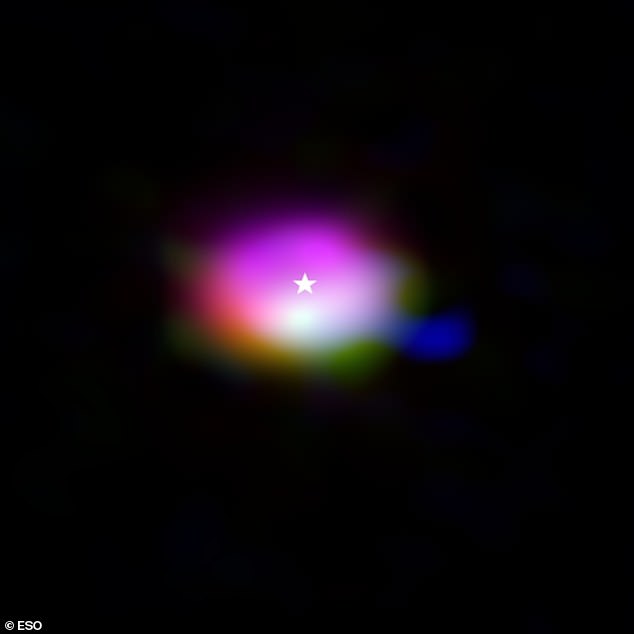 Recent observations spotted several complex organic molecules in this region, including formaldehyde (orange), methanol (green) and dimethyl ether (blue), the last being the largest molecule found in a planet-forming disc to date

‘Hopefully with more observations we can get a step closer to understanding the origin of prebiotic molecules in our own solar system.’

Future studies of IRS 48 with ESO’s Extremely Large Telescope (ELT), currently under construction in Chile and set to start operations later this decade, will allow the team to study the chemistry of the very inner regions of the disk. 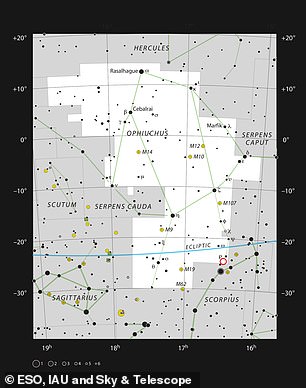 This chart shows the large constellation of Ophiuchus (The Serpent Bearer)

This is where rocky planets like the Earth may be forming.

The James Webb Space Telescope – which launched on Christmas Day – can analyse atmospheres of planets floating around the galaxy in unprecedented detail.

It has been hailed as a game-changer in the search for extra-terrestrials. The most promising – known as K2-18b – is 110 light -years away.

This is a world eight times the mass of the Earth, orbiting within the habitable zone of a red dwarf star, where it is possible liquid water may be flowing on the surface.

There is some suggestion it is a hycean planet, a hot, water-covered world with a hydrogen-rich atmosphere, and the James Webb telescope may be able to detect biosignatures that would suggest life is present on the world.

The findings have been published in the journal Astronomy & Astrophysics.