Meet the ‘cosmic cookie monster’: Astronomers observe powerful blasts of hot, warm and cold winds from an extreme neutron star as it rips up a nearby companion

Astronomers have for the first time observed powerful hot, warm and cold winds blowing from a ‘cosmic cookie monster’ neutron star as it rips up a nearby companion.

Neutron stars are among the densest objects in the universe and are formed when a massive star runs out of fuel and collapses.

Researchers suggest the discovery provides new insight into the behaviour of the stellar cannibals.

Along with black holes they are some of the most extreme objects in the universe, ripping up neighbouring stars. 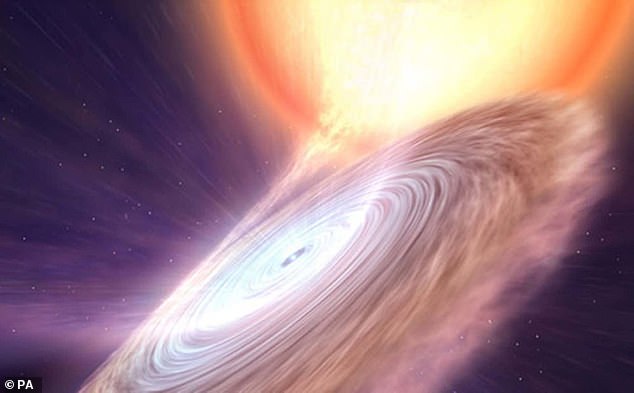 Astronomers have for the first time observed powerful hot, warm and cold winds blowing from a ‘cosmic cookie monster’ neutron star as it rips up a nearby companion (pictured in an artist’s impression)

WHAT ARE NEUTRON STARS?

Neutron stars are the collapsed, burnt-out cores of dead stars.

When large stars reach the end of their lives, their core will collapse, blowing off the outer layers of the star.

This leaves an extremely dense object known as a neutron star, which squashes more mass than is contained in the sun into the size of a city.

A neutron star typically would have a mass that’s perhaps half-a-million times the mass of the Earth, but they’re only about 20 kilometres (12 miles) across.

A handful of material from this star would weigh as much as Mount Everest.

They are very hot, perhaps a million degrees, highly radioactive, and have incredibly intense magnetic fields.

This makes them arguably the most hostile environments in the Universe today, according to Professor Patrick Sutton, head of Cardiff University’s gravitational physics department.

The dense objects, in particular their cores, are key to our understanding of the universe’s heavy elements.

However, most of what they take in gets flung back into space at high speed.

By expelling energy and matter into space they contribute to the formation of new generations of stars, and to the evolution of the galaxy itself, according to a study led by researchers at the University of Southampton.

Their findings were made using some of the most powerful telescopes on Earth and in space, including Nasa’s Hubble Space Telescope, and the European Southern Observatory Organisation’s Very Large Telescope in Chile.

Co-author Nathalie Degenaar, from the University of Amsterdam, said: ‘Neutron stars have an immensely strong gravitational pull that allows them to gobble up gas from other stars.

‘The stellar cannibals are, however, messy eaters and much of the gas that neutron stars pull towards them is not consumed but flung into space at high speed.

‘This behaviour has a large impact both on the neutron star itself and on its immediate surroundings.

‘In this paper we report on a new discovery that provides key information about the messy eating patterns of these cosmic cookie monsters.’

While warm gas is the most common material associated with the material being propelled out into space, until now only winds of hot or cold gas have been observed in X-ray binaries.

But the new study found evidence of warm wind occurring at the same time as cold wind.

A team of researchers from 11 countries studied the recent eruption of the X-ray binary known as Swift J1858.

Lead author Dr Noel Castro Segura, of the University of Southampton, said: ‘Eruptions like this are rare and each of them is unique.

‘Normally they are heavily obscured by interstellar dust, which makes observing them really difficult.

‘Swift J1858 was special because even though it is located on the other side of our galaxy, the obscuration was small enough to allow for a full multiwavelength study.

‘I’m excited because our discoveries give us a new window into these phenomena and might ultimately help us to build a more concrete understanding of what physical conditions are required to power winds in a wider range of astrophysical objects.

‘The new insights provided by our results are key to understanding how these objects interact with their environment.

‘By shedding energy and matter into the galaxy, they contribute to the formation of new generations of stars, and to the evolution of the galaxy itself.’

The study has been published in the journal Nature.