Gigantic sunspot the size of the Earth is spotted in the atmosphere of the sun by new solar telescope, providing fresh insight into activity on the star

A gigantic sunspot the size of the Earth has been spotted in the atmosphere of the sun, providing solar scientists with fresh insight into activity on our star.

This is the largest solar telescope in the world, and a cornerstone mission in finding out more about the sun, and how it impacts the Earth through solar eruptions.

The new image isn’t the first from Inouye, which began releasing high-resolution pictures of the sun two years ago, but this is some of the most close up views of the star ever taken from the ground – and providing a detailed view of sunspots.

This is also the first picture released as part of a dedicated scientific observation, exploring the magnetic reconnection phenomena, surrounding a giant sunspot.

‘The diameter of the dark part of the sunspot (called the umbra) is about the same diameter of Earth,’ a spokesperson explained. 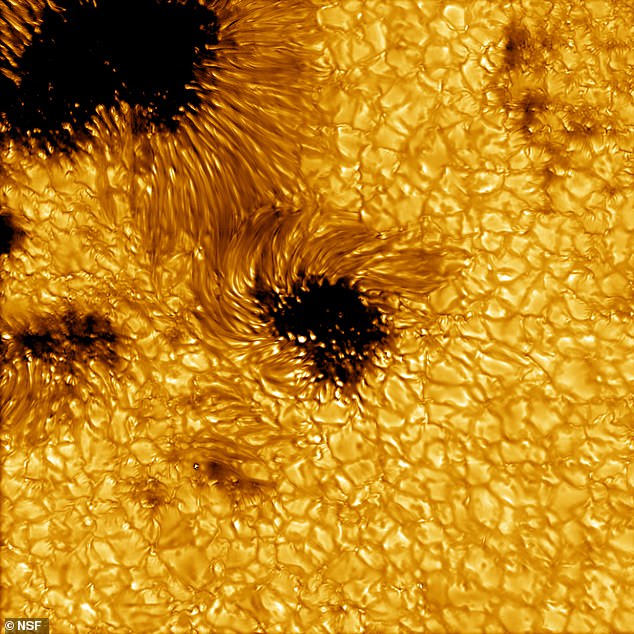 A gigantic sunspot the size of the Earth has been spotted in the atmosphere of the sun, providing solar scientists with fresh insight into activity on our star

Inouye started its first science observations on February 23, as part of an experiment led by Dr Tetsu Anan, Principal Investigator with the National Solar Observatory.

The team are looking at the ‘electric field associated with magnetic reconnection driving a jet in the chromosphere’ of the sun.

It is designed to verify a process known as ‘magnetic reconnection’ by measuring electric fields that are believed to occur during this process.

Magnetic reconnection is the mechanism by which solar magnetic fields are suddenly and energetically reconfigured, resulting in jets of plasma ejected from the solar atmosphere. This process has long been theorized but has yet to be proven.

Observations from Inouye’s unique suite of instruments are allowing scientists to observe this elusive but vital phenomenon for the very first time.

‘It is an honor to have been selected as the first science experiment executed at the Inouye Solar Telescope,’ said Dr Anan, 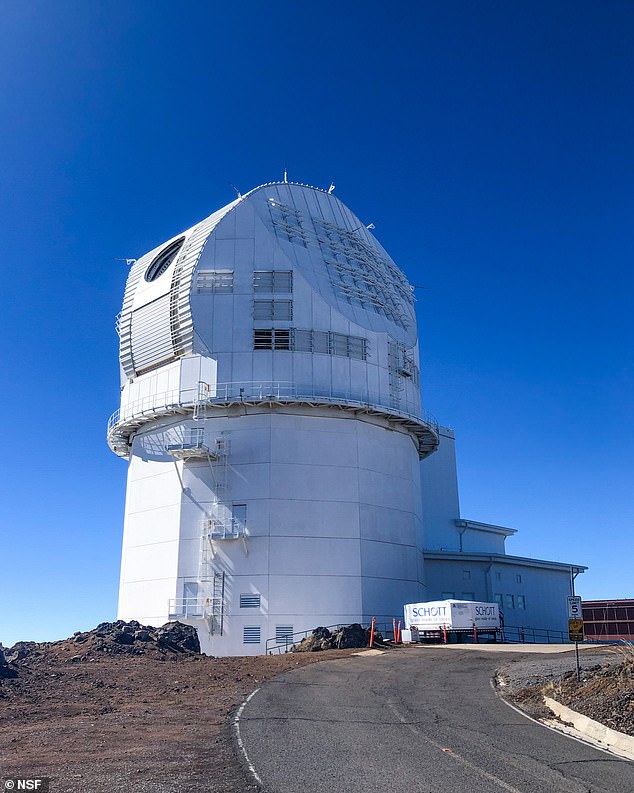 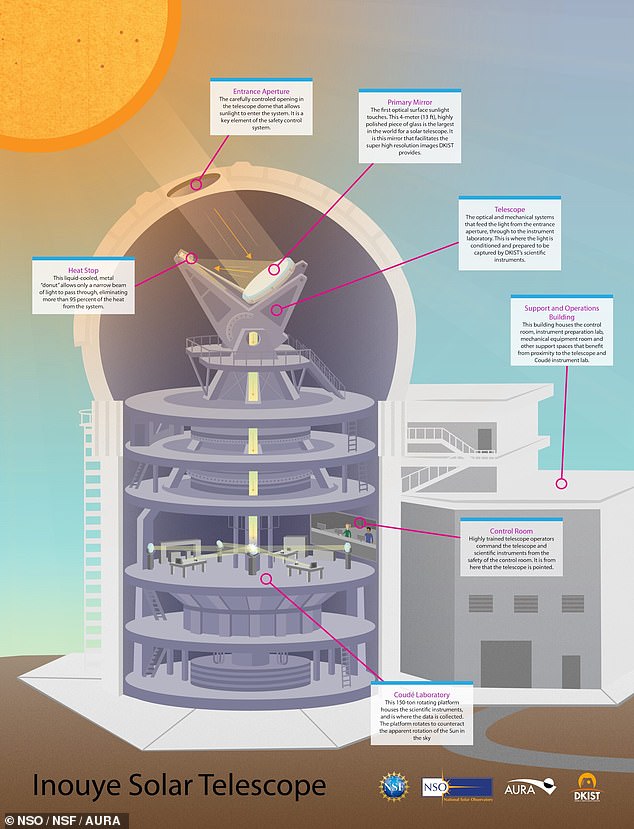 To observe the sun in unprecedented detail, the telescope features a 13-foot (4 metre) mirror — the largest ever for a solar telescope

WHAT IS THE DANIEL K. INOUYE SOLAR TELESCOPE?

The Daniel K. Inouye Solar Telescope is a US National Science Foundation facility located on the volcano Haleakalā on Maui, Hawaii.

To observe the Sun in unprecedented detail, the telescope features a 13-foot (4 metre) mirror — the largest ever for a solar telescope.

State-of-the-art adaptive optical technology allows the telescope to be precisely focused while compensating for the blurring of images caused by light passing through the Earth’s atmosphere.

To protect Inouye from the enormous heat generated by focusing around 13 kilowatts of solar power, the telescope has a specialised cooling system that includes more than seven miles (11.3 kilometres) of piping.

This system even makes use of ice that is generated on-site at night.

At the same time, the dome that covers the telescope is covered by thin cooling plates and shutters that help maintain a constant temperature around the instrument.

A liquid-cooled metal doughnut known as a ‘heat-stop’ acts to block most of the Sun’s energy from reaching the main mirror, which allows scientists to examine specific regions of the star’s surface in peerless detail.

‘This a moment we’ve all looked forward to – a historic welcoming to the new age of solar observations. I’d like to thank the co-investigators and everyone involved with the Inouye Solar Telescope for this monumental milestone.’

Dr Jiong Qiu, from Montana State University, was one of several co-investigators involved in the experiment, and added that magnetic reconnection is the keyword in many energy release events in the sun’s atmosphere, making it an important target.

‘For many years, solar physicists could only infer or estimate an average reconnection electric field based on many assumptions,’ Dr Qiu said.

‘I am hopeful that being able to directly measure this crucial physical parameter with the enabling technology by the Inouye Solar Telescope will bring breakthroughs in solar physics and revolutionize our understanding of magnetic reconnection.

The solar telescope has been over 25 years in the making and is hailed as the ‘crowning achievement’ for ground-based solar astronomy.

‘We are proud to bring the world’s largest and most powerful solar telescope online,’ said Dr Sethuraman Panchanathan, NSF Director.

The facility operates at 10,000 ft above sea level near the summit of Haleakalā on Maui, Hawai’i, where unique environmental conditions enable observations of the elusive solar corona.

The telescope’s operational phase is a long-awaited accomplishment, marking the end of a construction phase bookended by groundbreaking in 2012 and an 18-month delay caused by the COVID-19 global pandemic.

‘From design through construction, they overcame many challenges to realize a world-class facility poised to deliver on its transformational potential for all of humankind.’ 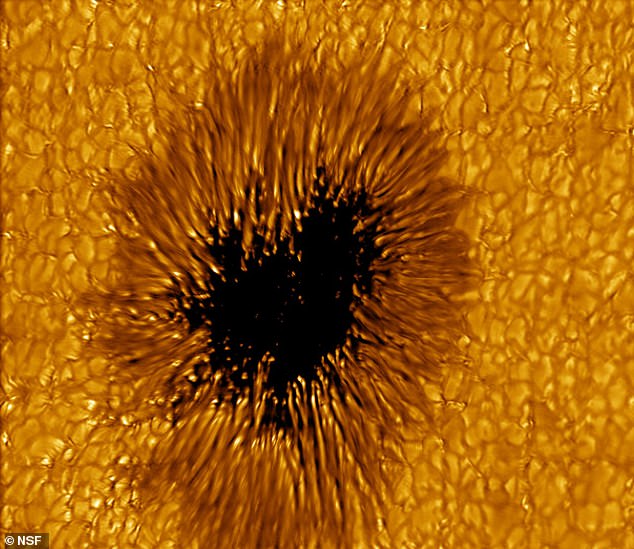 The new image isn’t the first from Inouye, which began releasing high-resolution pictures of the sun two years ago, but this is some of the most close up views of the star ever taken from the ground – and providing a detailed view of sunspots 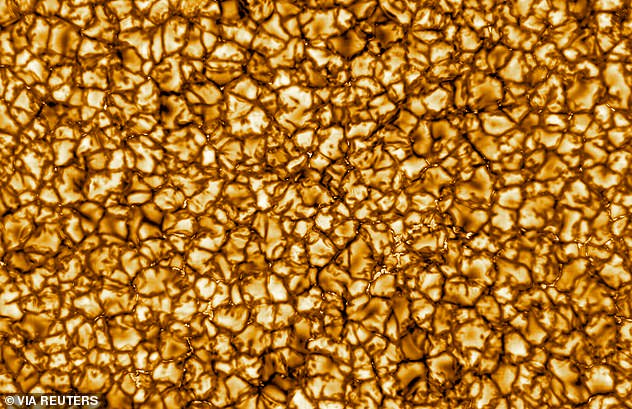 An image shows the sun’s surface at the highest resolution ever taken, shot by the Daniel K. Inouye Solar Telescope (DKIST) in January 29, 2020 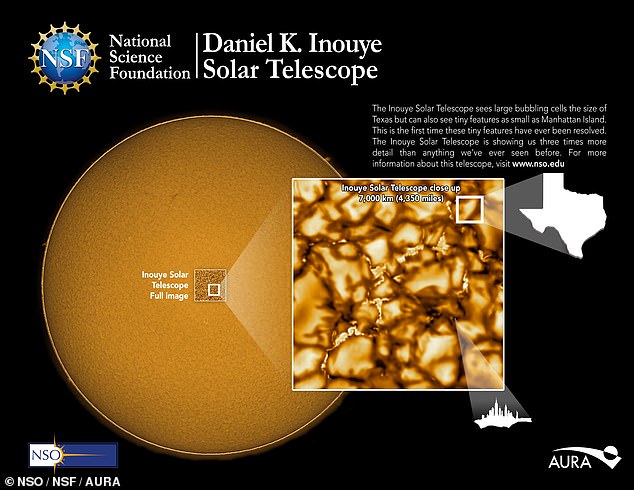 The Inouye Solar Telescope will take high-resolution images and make measurements of the magnetic fields of solar phenomena including sunspots, solar flares, and coronal mass ejections.

Solar activity drives space weather events that can impact Earth by disrupting power grids, communication networks, and other technology we depend on.

It has been designed to work alongside other advanced observatories, as well as probes near the sun, such as the Parker Solar Probe, to provide greater insight into space weather behavior to aid in developing the means of predicting such events.

‘There is no other facility like the Inouye Solar Telescope. It is now the cornerstone of our mission to advance our knowledge of the Sun by providing forefront observational opportunities to the research community. It is a game changer.’

They were introduced as a way to communicate to the general public the current and future space weather conditions and their possible effects on people and systems.

The scales have numbered levels, analogous to hurricanes, tornadoes, and earthquakes that convey severity.

Other systems: Pipeline currents can reach hundreds of amps, high frequency radio propagation may be impossible in many areas for one to two days, satellite navigation may be degraded for days, low-frequency radio navigation can be out for hours, and aurora has been seen as low as Florida and southern Texas (typically 40° geomagnetic latitude).

Power systems: Possible widespread voltage control problems and some protective systems will mistakenly trip out key assets from the grid.

Spacecraft operations: May experience surface charging and tracking problems, corrections may be needed for orientation problems.

Spacecraft operations: Surface charging may occur on satellite components, drag may increase on low-Earth-orbit satellites, and corrections may be needed for orientation problems.

Other systems: Intermittent satellite navigation and low-frequency radio navigation problems may occur, HF radio may be intermittent, and aurora has been seen as low as Illinois and Oregon (typically 50°geomagnetic latitude).

Other systems: HF radio propagation can fade at higher latitudes, and aurora has been seen as low as New York and Idaho (typically 55° geomagnetic latitude).

Other systems: Migratory animals are affected at this and higher levels; aurora is commonly visible at high latitudes (northern Michigan and Maine).