A geothermal energy start-up plans to invent a wave drill, that can penetrate 12.4 miles in the Earth’s crust, releasing virtually unlimited amounts of clean energy.

Quaise Energy, a startup out of MIT, based in Boston and Houston, recently secured $40 million in funding to help it get the first drilling rig off the drawing board.

The system works by drilling down to base rock, then firing high-power millimeter waves into the ground, without the need for complex mechanical drills that are limited by the pressure and intense heat deep into the crust.

Regular metal drills get broken or just melt beyond a certain depth, when the heat and pressure becomes too much for them to handle.

The goal is to be able to repurpose existing fossil fuel power plants, replacing burning coal with 900F heat from miles below the surface of the Earth.

The firm hope to have the first drilling platform live by 2024, the first wells producing up to 100 megawatt of geothermal energy by 2026, and fossil power plants repurposed by 2028, delivering clean energy around the world. 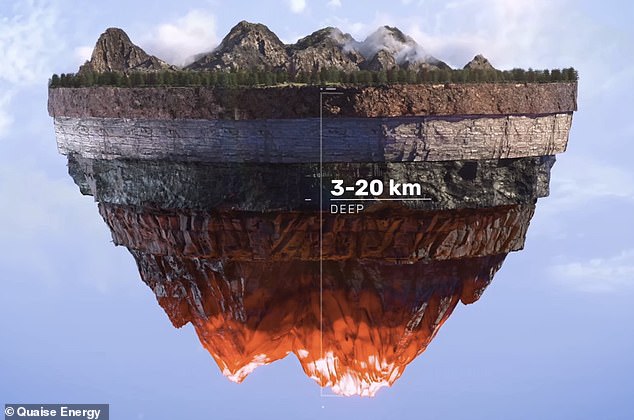 A geothermal energy start-up plans to use a wave drill, that can penetrate 12.4 miles (20km) in the Earth’s crust, releasing virtually unlimited amounts of clean energy

The goal is to be able to repurpose existing fossil fuel power plants, replacing burning coal with 900F heat from miles below the surface of the Earth

Geothermal energy is already in use, in areas where pockets of naturally occurring heat sources are close to the surface, and in easily accessible locations.

The problem is, for them to be viable they also have to be close enough to a power grid, making geothermal power plants relatively rare.

When they do work, they provide a totally reliable, round-the-clock power source, that continues going, unlike other renewables, such as wind and solar.

If the sun isn’t shining, or wind doesn’t blow, then power isn’t generated, but with geothermal energy, the rocks under the Earth are always hot.

Currently geothermal supplies about 0.3 per cent of global energy consumption, but Quaise believes its technology can solve that, and see the figure rapidly increase.

‘A rapid transition to clean energy is one of the biggest challenges faced by humanity,’ said Arunas Chesonis, Managing Partner of Safar Partners, the firm behind the fundraising round.

‘Geothermal energy can provide a lot more power using fewer resources. We have to approach the clean energy transition from both of those angles. 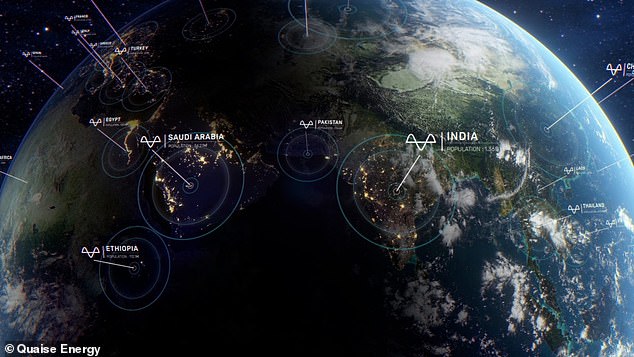 The firm hope to have the first drilling platform live by 2024, the first wells producing up to 100 megawatt of geothermal energy by 2026, and fossil power plants repurposed by 2028, delivering clean energy around the world

‘Quaise’s solution makes us optimistic for a future where clean, renewable energy will secure the future of our planet.’

Being able to tap into a globally available supply of geothermal energy requires drilling much deeper into the Earth than currently possible.

The Kola Superdeep Borehole in Russia holds the record for deepest produced hole, going down about seven miles, but even that isn’t enough for Quaise Energy.

They suggest that drilling would need to go down to about 12 miles below the surface in order to reach rocks hot enough to power massive power plants.

The problem is, when a drill goes below the base rock, temperatures and pressure start to increase, which in turn damage the drill and stop it going any deeper.

Quaise’s solution is to not use a physical drill at all, but rather turn to a sci-fi inspired ‘beam’ technology, that vaporizes the rocks in its path.

This new millimeter wave drilling system uses a technology that has been around for a decade, but not produced at commercial scales before. 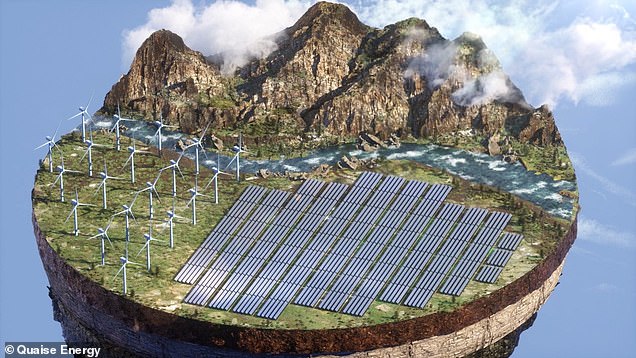 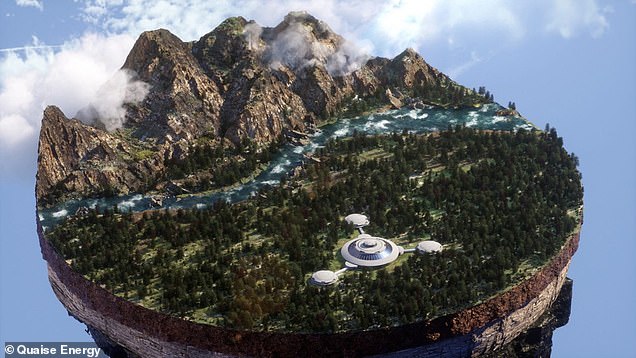 Quaise Energy says its geothermal drilling system would require a lower footprint than wind and solar, and can operate continuously

It is a form of ‘directed energy drilling’, and uses high-frequency waves to heat rock in its path to the point where it melts or vaporizes.

Quaise Energy uses a gyrotron to power its drilling platform, this is a high-power linear-beam vacuum tube that generates millimeter-wave electromagnetic waves 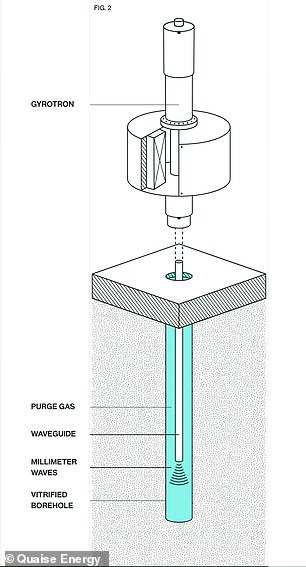 The system works by drilling down to base rock, then firing high-power millimeter waves into the ground, without the need for complex mechanical drills

Being able to drill deep into the surface, from anywhere on the planet, without expensive, and easily damaged drills, is a game changer for renewable power, according to the team behind the technology.

It would allow for geothermal power stations to be placed anywhere, and even replace existing fossil fuel stations with geothermal energy sources.

‘Our technology allows us to access energy anywhere in the world, at a scale far greater than wind and solar, enabling future generations to thrive in a world powered with abundant clean energy.’

The company plans to use its novel drilling technology to re-power traditional power plants, saving infrastructure costs and utilizing the current oil and gas industry’s workforce to accelerate the shift towards a sustainable energy industry.

‘We need a massive amount of carbon-free energy in the coming decades,’ said Mark Cupta, Managing Director at Prelude Ventures, involved in funding the firm.

Quaise Energy spun out of the MIT Plasma Science and Fusion Center in 2018.

Deep geothermal energy is at the core of an energy-independent world.

It is the only renewable solution with the potential to get us to net zero by 2050. It is renewable, inexhaustible, and available everywhere.

Based on breakthrough fusion research and well-established drilling practices, this is a new approach to ultra-deep drilling.

First, a conventional rotary drill is used to get to basement rock. Then, high-power millimeter waves are used to reach unprecedented depths.

This will allow drilling to reach depths of up to 12.4 miles below the surface, where temperatures reach 900F.

Deeper geothermal is more universal, as it can be tapped into anywhere on Earth, and linked to power stations.

At these temperatures, geothermal is so powerful that it can re-power most fossil-fired power plants.