The stuff of nightmares! False widow spider EATS a bat caught in its web in north Shropshire, in the first sighting of its kind

A false widow spider has been documented eating a bat caught in its web in north Shropshire, in the first sighting of its kind.

The noble false widow (Steatoda nobilis) is an invasive species of spider known for causing painful symptoms when it bites unlucky humans.

On two consecutive days in July 2021, pipistrelle bats living in a north Shropshire attic were found entangled on the species’ web below the entrance to the roost.

The first bat, a young pup, was dead and completely immobilized with its limbs pinned tightly to the torso with silk.

It was slightly shriveled and discolored from the spider feeding off the remains.

A second, much larger adult bat was also captured and entangled in the web, but as it was still alive, the bat was rescued from the web and released.

It’s likely that the spider would not have consumed the entire bat, but instead have fed off it until it was full, according to experts. 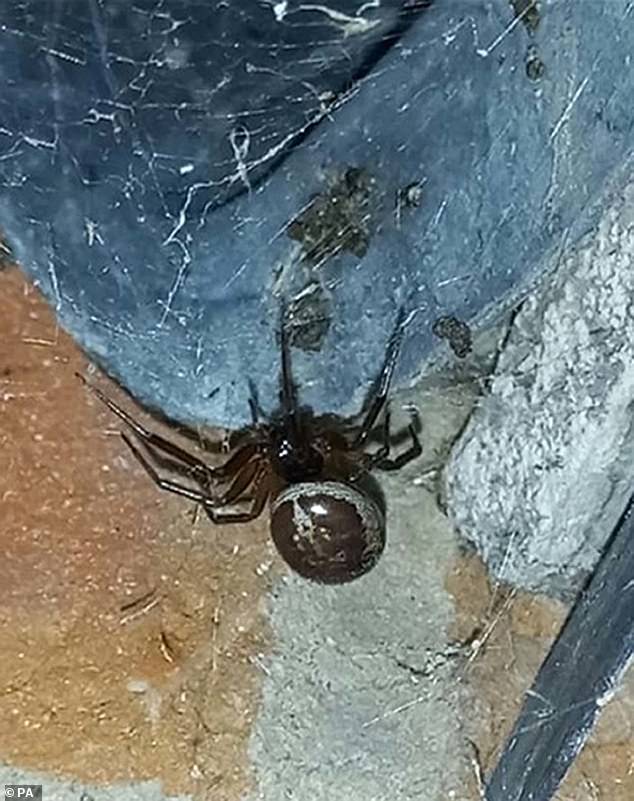 This photo issued by National University of Ireland Galway of a False Widow Spider that preyed on Pipistrelle bats. Scientists have published the first record of a noble false widow spider feeding on a protected species of bat in the UK

Here, the young Pipistrellus pup is entangled in the web of Steatoda nobilis. (b) Posterior view of the bat pup with evidence of manipulation and partially, but tightly wrapped, as the limbs are neatly tight to the body. The head tucked into the belly (blue arrow), right wing folded and twisted tightly to the body (red arrow), and the rear end folded into the belly with a region of dark purple coloration and slightly shriveled (black arrow)

Scientists claim the event marks the first time a member of the Theridiidae family of spiders has been recorded preying on a bat anywhere in the world, or any vertebrate in the UK.

The event also marks the first time for any species of false widow spider to be recorded preying on mammals.

The experts have detailed the discovery – made by wildlife artist Ben Waddams at his Shropshire home – in a paper published in the journal Ecosphere. 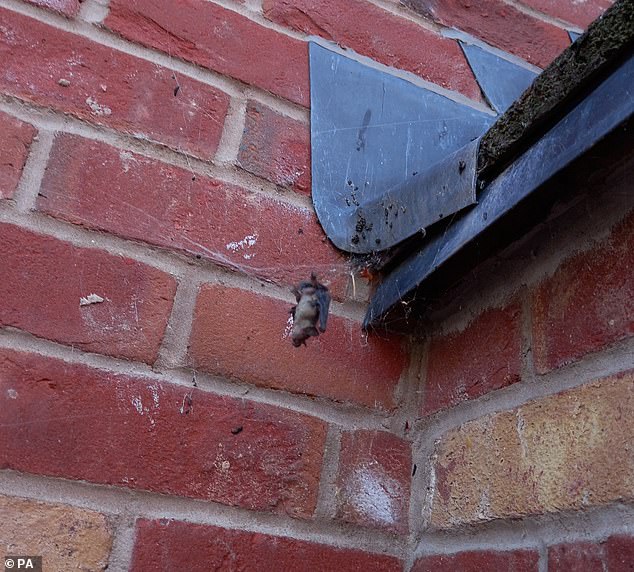 A second, much larger adult bat (pictured here), was also captured and entangled in the spider’s web 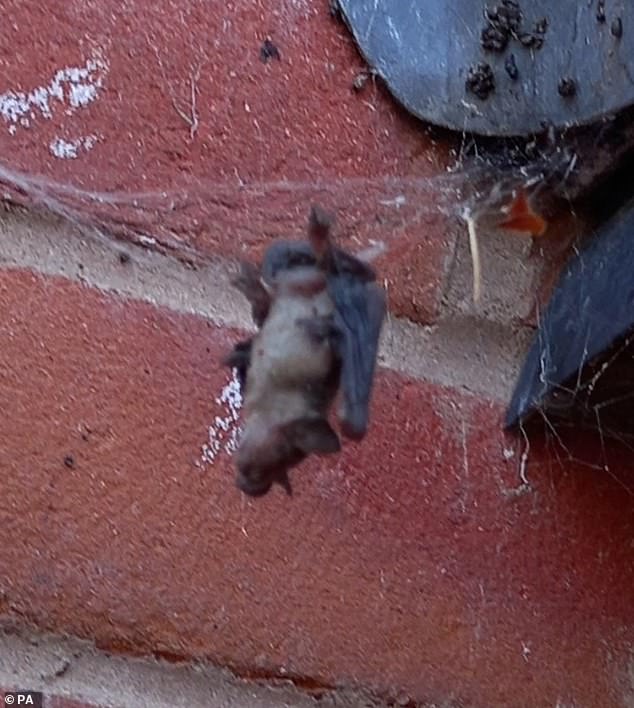 As this larger bat was still alive, the unfortunate creature was rescued from the web and released

‘[This] allows them to capture small vertebrate prey many times larger than the spider itself with surprising ease.’ 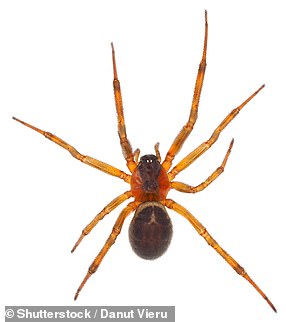 Habitat: Indoors and outside

(Not to be confused with the black widow spider, on whose similarity the false widow was given its common name.)

The spider possesses a fast-acting neurotoxic venom with a very similar composition to true black widows that can cause neuromuscular paralysis in terrestrial vertebrates which allows them to occasionally feed on small reptiles and mammals.

Originating from Madeira and the Canary Islands, the noble false widow has the potential to become one of the world’s most invasive species of spider.

It was first reported in southern England in 1879 and has increased its range and population density in recent decades, spreading northwards towards Scotland and westward through Wales and Ireland.

In that time, the species has also spread globally from across Europe, East Asia, North America and South America.

The species is known for its medical significance, having the ability to cause a range of mild to severe symptoms in people who are bitten, but little is known about its impact on native species.

Over the past five years, the team led by Dr Michel Dugon in the Ryan Institute at NUI Galway, have been studying a wide range of characteristics specific to the species including its venom and symptoms from its bites. 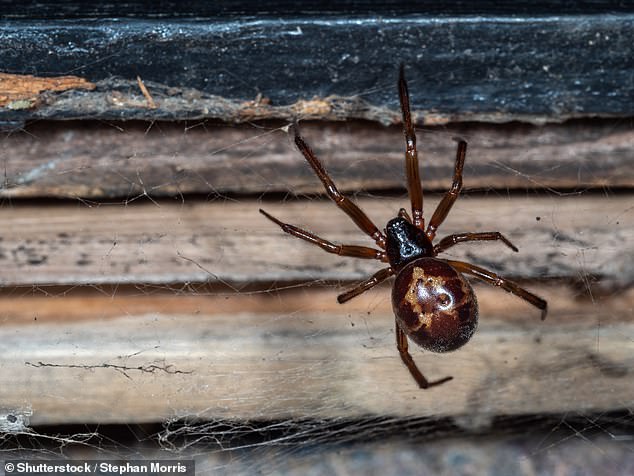 Cases of bites from the noble false widow spider (pictured) are on the rise in the United Kingdom and can be serious enough as to require hospital treatment, scientists have warned

Bites from the noble false widow spider can trigger symptoms that are both localised and systemic, and can range from light to debilitating pain and mild to intense swelling.

Other reported symptoms include:

In rare cases, victims have also been known to develop minor wounds at the puncture site and/or required treatment for severe bacterial infections as a result of the bite.

‘We have been working on the noble false widow for the past five years, and have learnt a great deal about this species,’ said Dr Dugon, head of the venom systems lab at the Ryan Institute.

‘Yet, we are still surprised by its ability to adapt to new environments and make the most of the resources available. It is a truly remarkable species.’

In the UK, the Pipistrelle bats are protected under the Wildlife and Countryside Act, 1981, and the Conservation of Habitats and Species Regulations 2017.

The grisly event is not as uncommon as people might expect – in 2018, the noble false widow spider was reported feeding on a protected species of native lizard in Ireland.

‘Now that this alien species has become well established in Ireland and the UK, we are witnessing such fascinating events on our very own doorstep,’ said lead study author Dr John Dunbar at National University of Ireland Galway.

‘Even other, much smaller, species of false widows are known to capture and feed on snakes and lizards.

‘This study presents yet another example of the invasive impact by the noble false widow on native species.

‘We know they are much more competitive than native spiders, and this further confirms their impact on prey species.’ 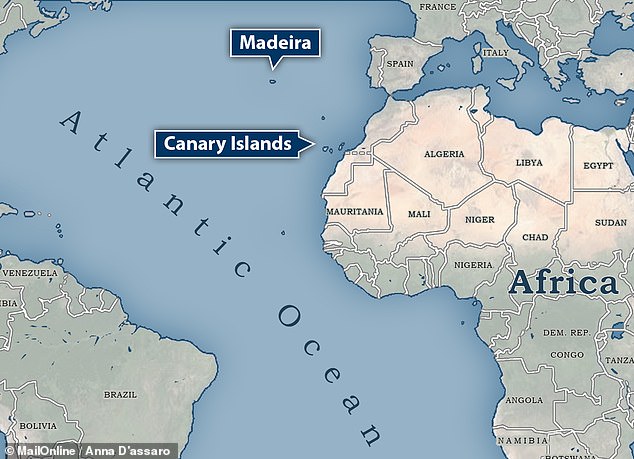 Having originated on the Canary Islands and Madeira (pictured above), the noble false widow is now in the running to be one of the world’s most invasive species of spider, having made it parts of Europe, North and West Africa, California, Chile, Colombia and Ecuador 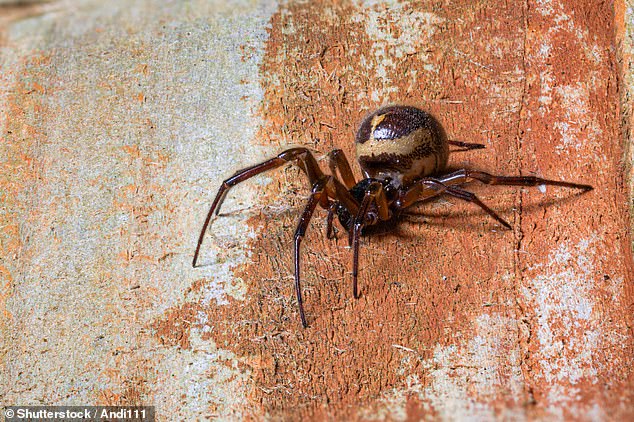 ‘In addition to their medically significant venom, noble false widows are extremely adaptable and competitive in the wild,’ said Michel Dugon of the National University of Ireland, Galway

Researchers don’t know how much of an impact the species is having on the environment and the ecosystem, in terms of competing with native spiders.

However, the spider’s venom possess a powerful neurotoxin and this enables this to take down vertebrate prey, as seen in this case.

‘It makes them much more competitive than the native spiders,’ said Dr Dunbar.

‘Some of the studies show that the venom of the noble false widow is significantly more potent than the native spiders.’

STUDENT, 18, WAS LEFT FIGHTING FOR HER LIFE AFTER VENOMOUS ‘FALSE WIDOW’ SPIDER BIT HER AS SHE SLEPT IN A CARAVAN ON WELSH HOLIDAY PARK

A student was left fighting for her life in hospital after a venomous spider bit her while she slept on holiday – leaving her with a golf ball sized lump.

Abby Tannetta, 18, had been staying at her parents’ caravan in Cardigan Bay Holiday Park, Pembrokeshire, Wales, and was celebrating finishing college with a friend when she was bitten by what she believes was a false widow spider as she slept.

The student, from Caerphilly, Wales, soon woke up in the early hours of May 26 with a stabbing pain in her side and a giant spider next to her in the bed.

Days later, Ms Tannetta was rushed to hospital for emergency surgery after doctors feared the young student could contract sepsis if the infection was not halted.

Her scary encounter came just days after the British Arachnological Society (BAS) reported a ‘huge increase’ in sightings of all species of spiders – including venomous false widows.