Not too big and not too small! Astronomers discover a rare ‘missing link’ black hole in the Milky Way’s closest large galactic neighbour

Astronomers say the black hole has an ‘intermediate-mass’, and is the rare third type of black hole that has only recently come to light.

Described as ‘unlike any other’, the black hole was found in a star cluster called B023-G078 in the Andromeda galaxy.

Otherwise known as Messier 31 or M31, Andromeda is the closest large spiral galaxy to our galaxy, the Milky Way.

One theory is that intermediate-mass black holes could be the seeds from which supermassive black holes grow. 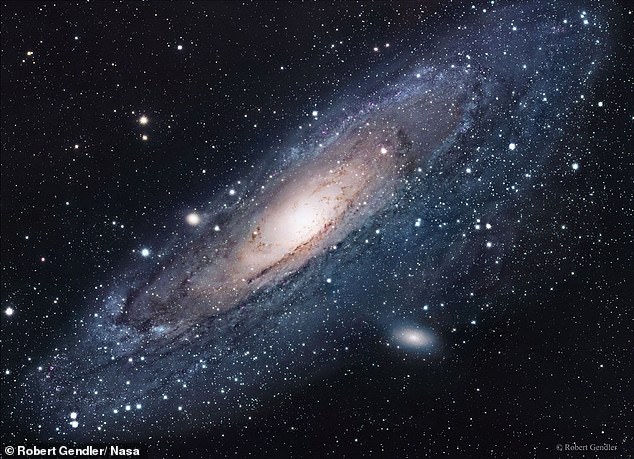 Andromeda is the nearest major galaxy to our own Milky Way galaxy. The diffuse light from Andromeda is caused by the hundreds of billions of stars that compose it. The several distinct stars that surround Andromeda’s image are actually stars in our Galaxy that are well in front of the background object

The three types of black hole

The new study, published in The Astrophysical Journal, was based on data from the near-infrared integral-field spectrograph (NIFS) at the Gemini North telescope in Hawaii.

Astronomers measure the mass of a black hole by tracing the motion of the gas and dust swirling around it.

This can be done at many wavelengths, such as by measuring the positions of stars which orbit near a black hole at optical wavelengths.

Study author Anil Seth, an associate professor of astronomy at the University of Utah, said the finding fills a gap between the very large and the very small black holes known to exist.

‘But there aren’t any measurements of black between these – that’s a large gap. This discovery fills the gap.’

As the name suggests, star clusters are groups of hundreds to millions of stars that share a common origin, all gravitationally bound for as long as several billions of years.

The black hole was found hidden within B023-G078, an enormous star cluster in Andromeda with a solar mass of 6.2 million.

Long thought to be a globular star cluster, the researchers argue that B023-G078 is instead a stripped nucleus – a remnant of a small galaxy that fell into a bigger one and had its outer stars stripped away by gravitational forces.

What’s left behind is a tiny, dense nucleus orbiting the bigger galaxy and at the centre of that nucleus, a black hole.

‘We knew that there must be smaller black holes in lower mass stripped nuclei, but there’s never been direct evidence.

‘I think this is a pretty clear case that we have finally found one of these objects.’

A globular cluster has a signature light profile that has the same shape near the centre as it does in the outer regions.

But B023-G078 is different – the light at the centre is round and then gets flatter moving outwards.

The chemical makeup of the stars changes too, with more heavy elements in the stars at the centre than those near the object’s edge.

‘In contrast, these stripped nuclei can have repeated formation episodes, where gas falls into the center of the galaxy, and forms stars.

‘And other star clusters can get dragged into the centre by the gravitational forces of the galaxy.

‘It’s kind of the dumping ground for a bunch of different stuff. So, stars in stripped nuclei will be more complicated than in globular clusters. And that’s what we saw in B023-G078.’

In September 2020, researchers in Australia working as part of an international collaboration studying gravitational waves reported the first direct observation of an intermediate-mass black hole.

Around 150 times heavier than our Sun, it was birthed from the merger of two smaller (yet still very large) black holes 17 billion light years away.

Black holes are so dense and their gravitational pull is so strong that no form of radiation can escape them – not even light.

They act as intense sources of gravity which hoover up dust and gas around them. Their intense gravitational pull is thought to be what stars in galaxies orbit around.

How they are formed is still poorly understood. Astronomers believe they may form when a large cloud of gas up to 100,000 times bigger than the sun, collapses into a black hole.

Many of these black hole seeds then merge to form much larger supermassive black holes, which are found at the centre of every known massive galaxy.

Alternatively, a supermassive black hole seed could come from a giant star, about 100 times the sun’s mass, that ultimately forms into a black hole after it runs out of fuel and collapses.

When these giant stars die, they also go ‘supernova’, a huge explosion that expels the matter from the outer layers of the star into deep space.