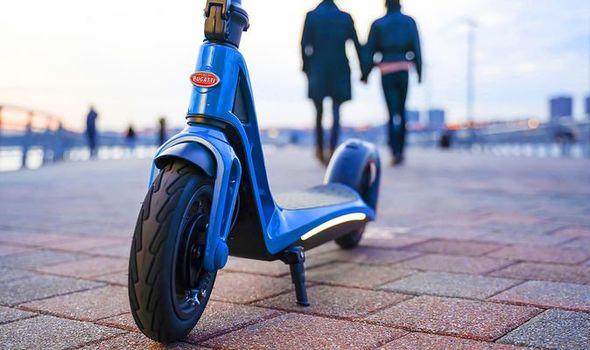 Supercar brand Bugatti has launched its first electric vehicle, but those hoping to see the French automobile maker take on the likes of Rivian and Tesla will be disappointed. That’s because Bugatti hasn’t revealed a battery-powered hypercar …but an electric scooter. The scooter, which was revealed at world-renown consumer electronics tradeshow in Las Vegas – CES 2022, was built in collaboration with Bytech International, a brand best known for its gaming headsets and wireless earbuds.

Those hoping that Bugatti would bring the same breakneck speeds that define its cars will be disappointed. The scooter boasts a 700W electric motor that can propel the two-wheeled vehicle to a top speed of 18.8 miles per hour. However, the scooter arrives with dedicated Economy and City modes that limit to top speed to 9 and 12 mph, respectively.

According to Bugatti, riders can expect a range of around 22-miles between charges. That mileage is helped by the lightweight frame, which tips the scales at 15.8kg, which is slightly lighter than the critically-acclaimed Pure Air Pro scooter. Still, if you want to use an electric scooter to commute or longer journeys, there are better options available.

But while the electric scooter might not borrow the top speed found on Bugatti’s cars, there are some trademark touches from the French firm to be found here.

First off, the electric scooter arrives with a digital dashboard display that shows key statistics as you ride. There’s also turn signals built-in, which will help anyone who wants to use the scooter to commute. And finally, the tail light projects the Bugatti logo onto the road behind you as you rumble along at 18.8mph.

Unfortunately, there’s no word on the release date or price for the Bugatti-designed electric scooter yet. In fact, there’s not even a finalised name yet. Stay tuned, as we’ll share more details about this all-electric vehicle when they become available. In the meantime, those who want an electric scooter would do better to look elsewhere.

Chances are, you’ve had a Xiaomi-branded electric scooter pass you in the street. This model is mind-bogglingly popular – it was named the best-selling scooter worldwide in 2018 and 2019. That popularity is well deserved, thanks to the water-resistant design (perfect for the Great British weather), 18.5-mile range between charges, lightweight 12.5kg design, and two-year warranty on the hardware

Usually priced at £449, the second-generation Pure Air is now available at a discounted price. The 500W motor is designed to be able to drag you up steep hills without breaking a sweat and it boasts the same 18.5 mileage between charges. There’s also a USB port built-in so you can charge your phone or wireless earbuds on the move and puncture-resistant tyres. Pure offers a companion app for your smartphone with more controls too.