Social media giants Twitter and Snapchat are defending anonymity online as lawmakers and bureaucrats work on a series of proposed laws that would force Australians to verify their age before using many of the most popular sites on the internet.

While the laws planned by the government would not require users to post their real names, Snapchat’s parent company is concerned technology giants would effectively be forced to keep copies of users’ IDs and contact information to meet planned age verification rules. 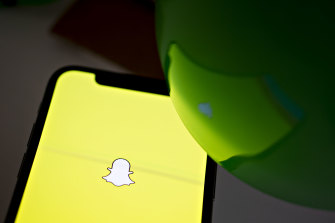 Snapchat, which has undergone a recent revival, counts about 5 million users in Australia.Credit:Bloomberg

“Several of the measures which the government is currently proposing to introduce seem designed to end the right to anonymity online,” Snap said in a submission to a parliamentary inquiry into online safety.

It argues an erosion of anonymity could hurt people who use it to protect themselves online, from survivors of domestic violence to Australians critical of repressive foreign regimes that target dissidents abroad.

Twitter argues that anonymity alone does not lead to abuse online. “In many cases people post harassing, toxic replies under their real name, with a photo of their real face,” the company said in its submission. And a digital identification policy, it warned, could stop people without government IDs from accessing services online.

The tussle puts parts of the technology sector at odds with the government, which has grown increasingly concerned about the social ills of online harassment and young people accessing sometimes extreme pornography, and views its crackdown as a potential election issue.

But all sides acknowledge that the issue is not simple to regulate, with the British government giving up its plans to require residents to prove they were over 18 before watching pornography in 2019 after years of work.

Communications Minister Paul Fletcher points to the work the government has done to protect young people and consultations underway by the eSafety Commissioner on age verification.

“This is a complex issue and we will always need to look carefully at how to balance safety, privacy and anonymity,” Fletcher says.

A law passed last year, the Online Safety Act, strengthens Australia’s existing restricted access system that is intended to stop people under 18 seeing things like pornography online. The independent eSafety Commissioner is also running a consultation process on how the sector can check users’ ages before accessing restricted services such as pornography sites.

“For young children, accidental encounters with pornography can be distressing and even harmful,” say the commissioner, Julie Inman Grant. “For older children who stumble upon or seek out pornographic material, there is a risk that it will give them unrealistic and damaging ideas about what intimate relationships should look like – especially as the material becomes increasingly violent and extreme.”

She says her agency was focussed on identifying technical measures that preserved privacy, minimised sharing personal information and demonstrated safety and security.

The term for such systems, which can use things like AI-driven age estimates based on a user’s webcam picture or analysis of their behaviour on a service, is “age assurance” rather than the more invasive age verification.

It is the former that companies such as Snap want for their platforms, as well as broader work on online safety, which the companies say is already an area of intense focus.

However, the sector is battling a poor reputation after testimony to a US government inquiry from critics such as the Facebook whistleblower, Frances Haugen on how social media use can make young people feel worse about themselves.

At the same time as it considers age verification for adult material, the government has proposed another two laws. One, which is intended to target trolling, would require social media companies to collect user’s real contact details such as an email or address, if they want to avoid liability for defamatory comments.

Another, called the Online Privacy Bill, would require any online service that lets people interact as one of its primary functions, from WhatsApp and Facebook to games like League of Legends and forums like Reddit to verify users’ age before they sign up. Children under 16 would only be allowed in with a parent or guardian’s verified consent.

Digi, a lobby group for the technology giants including Facebook, Google and Twitter, says the government should conduct more consultations to let Australians come to grips with its plan.

“Do all adults and minors want to routinely provide their personal information, age data, and potentially identity verification documents when they are perusing websites that include user interaction?” Digi said in its submission to the inquiry.

Meta, the parent company behind Facebook, Instagram and WhatsApp said in its submission to the inquiry that the government should take stock of all the laws dealing with the internet that it has recently enacted.

“Policymakers should be alive to the risk of overlapping, duplicative or inconsistent rules across different laws,” Meta’s submission reads.

The inquiry is due to report by mid-February and Fletcher, as the minister responsible, says the government would consider its findings carefully.