Peru’s Wari empire may have mixed hallucinogenic seeds into beer to maintain political control and help leaders bond with ordinary people over 1,000 years ago, researchers say

Researchers have analysed botanical remains of seeds from the vilca tree, used as hallucinogens for thousands of years, that were found in Quilcapampa, Peru.

During communal feasts, hallucinogenic seeds were added to a beer-like fermented drink called chicha made from the molle tree, the analysis indicates, ‘to enhance the psychoactive effects of both’.

Communal drug use reinforced Wari control by both cementing relationships at feasts and making the Wari leadership important as the drug providers, experts say.

Their study marks the first evidence of consumption of the hallucinogenic vilca tree in the Wari Empire, which ruled the highlands of Peru from AD 600 to 1000, prior to the famous Inca Empire.

Researchers have yet to establish why the Wari Empire collapsed prior to the era of the Incas between the 13th and 16th centuries. 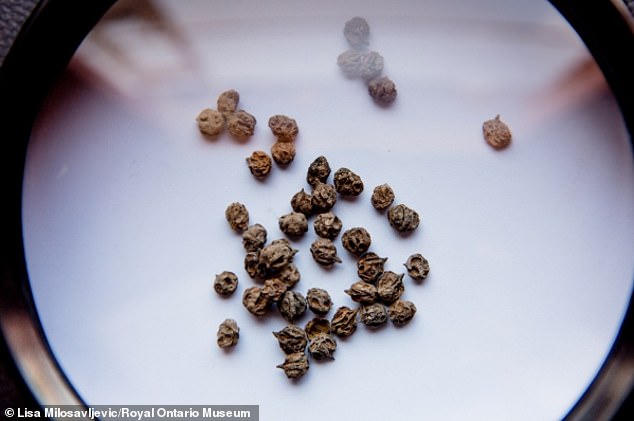 These molle drupes were used to make an alcoholic beverage called chicha. This sample was excavated in Quilcapampa, Peru 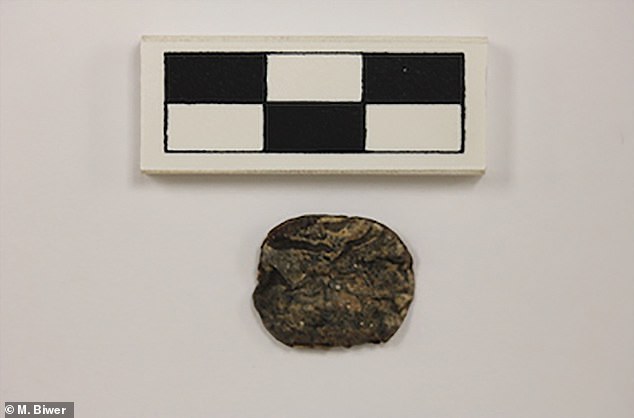 Vilca seed recovered from Quilcapampa (scale in cm). Vilca is a common name Anadenanthera colubrina, a species of tree with potent seeds used for thousands of years 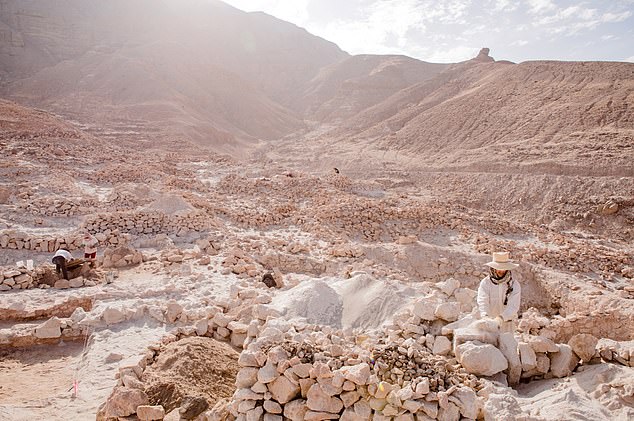 The new study is based on survey and excavations that took place at Quilcapampa, Peru between 2013 and 2017

WHO WERE THE WARI CIVILISATION?

The Wari civilisation flourished in the coastal and highland areas of ancient Peru between c. 450 and c. 1000 CE.

Based at their capital Huari, now central Peru, the Waris successfully exploited the diverse landscapes they controlled to construct an empire administered by provincial capitals connected by a large road network.

Their methods of maintaining an empire and artistic style would have a significant influence on the later Inca civilisation.

The study was carried out by researchers at Dickinson College, Carlisle, and University of Rochester, New York in the US, and the Royal Ontario Museum in Canada.

‘This was a turning point in the Andes in terms of politics and use of hallucinogens,’ study author Matthew Biwer at Dickinson College told CNN.

‘We see this kind of use of hallucinogens as different use context than in prior civilisations, who seem to have closely guarded the use of hallucinogens to a select few, or the latter Inca Empire who emphasised the mass-consumption of beer but did not use psychotropic substances such as vilca at feasts.’

Researchers have also found ceramic remains at Quilcapampa including jars and cups, suggestive of large-scale brewing operations. For example, a face-necked jar excavated from Quilcapampa depicts a bound prisoner.

The Wari outpost of Quilcapampa, Peru was established during the ninth century AD and occupied for several decades.

During the fieldwork led by the Royal Ontario Museum, archaeologists found more than a million botanical remains, including seeds from the hallucinogenic vilca tree.

Analysis also revealed that chicha, a beer-like alcoholic beverage, was brewed from the molle tree in large quantities at the site.

The majority of the evidence for chicha production and consumption comes from the site’s core, where ceramics and other finds suggest feasts were held for guests.

The botanical remains studied probably come from a feast held near the end of Quilcapampa’s occupation.

Crucially, this was also where the vilca seeds were found, suggesting this hallucinogenic drug was also part of these feasts.

During the time of the Wari Empire, the neighbouring Tiwanaku used the drug extensively through inhalation.

The Ponce Stele sculpture at Tiahuanaco portrays an elite individual holding a drinking cup and snuff tablet. Right, illustration of a vessel from the Wari site of Conchopata with a seed pods sprouting from the head of the Staff God 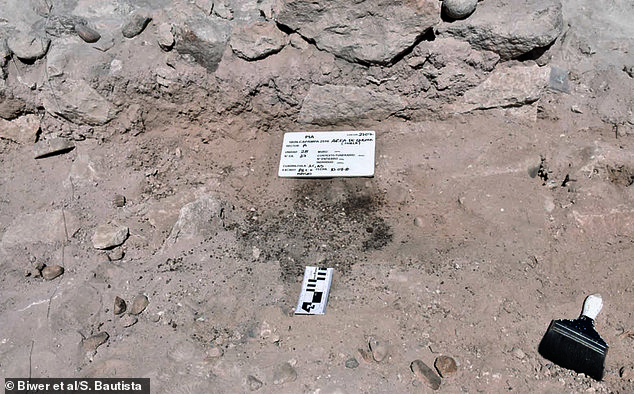 Molle pit located in the Quilcapampa site. Chicha, a beer-like alcoholic beverage, was brewed from the molle tree

Vilca has a long history of use in South America – a 4,000-year-old pipe at Inca Cueva was found with compounds from the plant inside, along with vilca seeds.

However, by combining with chicha, the Wari people of Quilcapampa appear to have been using the drug in a new way.

Incorporating the hallucinogen into communal feasts hosted by the elites that cemented social relationships and highlighted state hospitality.

The researchers suggest this more inclusive strategy may have been important for reinforcing Wari political control.

In contrast, earlier use appears to be ‘exclusionary’ with only a select few allowed to use vilca and in an isolated setting.

At Chavín de Huántar in Peru, from the first millennium BC, a limited number of priests may have consumed vilca snuff in enclosed galleries. 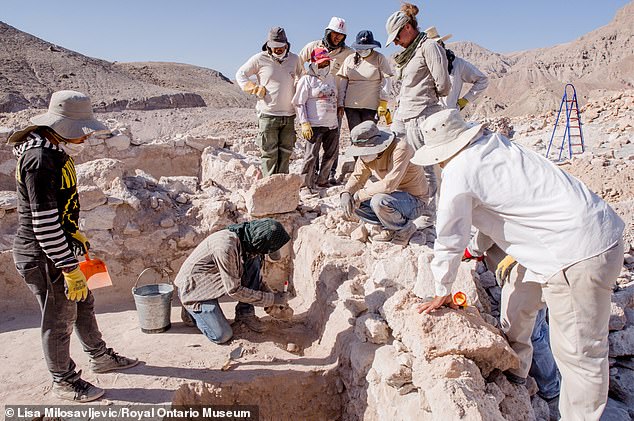 ROM fieldwork during the 2016 season at Quilcapampa. The ROM worked at the site from 2013 to 2017 and involved an international team from Peru, the United States, and Canada 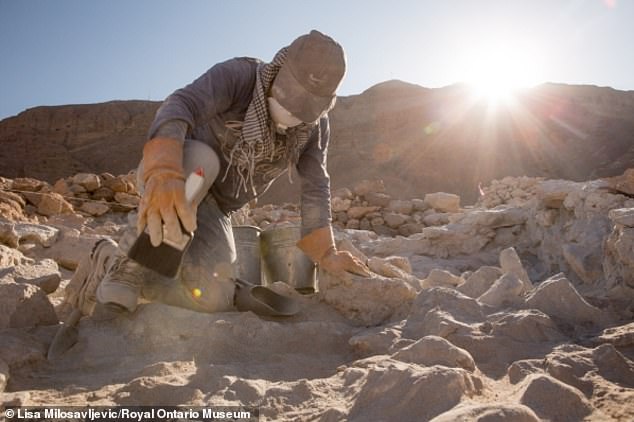 The Wari outpost of Quilcapampa, Peru was established during the ninth century AD and occupied for several decades

‘By tying their esoteric knowledge of obtaining and using vilca as an additive to molle chicha, an intoxicant that stimulated communitas, Wari leaders were able to legitimise and maintain their heightened status,’ the researchers say.

‘These individuals were able to offer memorable, collective psychotropic feasts, but ensured that they could not be independently replicated.’

The difficulty in obtaining and preparing vilca would grant the Wari elites who provided it special status – a key development for politics in the region.

The later Inca Empire also followed the Wari communal style of drug use – although they preferred the group consumption of large quantities of maize beer rather than vilca.

The study has been published in the journal Antiquity.

WHAT IS THE BEER-LIKE BEVERAGE CALLED ‘CHICHA’?

To learn more about the beer that played such an important role in Wari society, the researchers analysed pieces of ceramic beer vessels from Cerro Baúl.

They used several techniques, including one that involved shooting a laser at a shard of a beer vessel to remove a tiny bit of material, and then heating that dust to the temperature of the surface of the sun to break down the molecules that make it up.

From there, the researchers were able to tell what atomic elements make up the sample, and how many – information that told researchers exactly where the clay came from and what the beer was made of.

To check that the ingredients in chicha could indeed be transferred to the brewing vessels, the researchers worked with Peruvian brewers to recreate the brewing process.

‘Making chicha is a complicated process that requires experience and expertise.

The experiments taught us a lot about what making chicha would look like in the ruins of a building and how much labour and time went into the process,’ said Professor Donna Nash, an adjunct curator at the Field Museum.