The sea dragon of Rutland: Giant 32ft ichthyosaur found at the bottom of a Midlands reservoir hailed ‘one of best fossil finds in UK history’

A giant ‘sea dragon’ discovered in the Midlands has been hailed as one of the greatest finds in British fossil history.

The ichthyosaur, spotted at the bottom of the Rutland Water, is the largest and most complete skeleton found in the UK, at 32 feet (10 metres) in length, with a skull weighing a ton.

The new specimen, which lived approximately 180million years ago, was found at the largest reservoir in England as conservationists drained water to improve the habitat for breeding birds.

Joe Davis, 48, from Leicestershire and Rutland Wildlife Trust, who found the skeleton, said: ‘My colleague thought the ridges we saw at the muddy bottom of the reservoir were probably just pipes.

‘When the palaeontologists and our team uncovered the full skeleton and lifted it out using a tractor with a loader, the head was as large as me, and I am six-feet tall. It’s a tremendous beast.’ 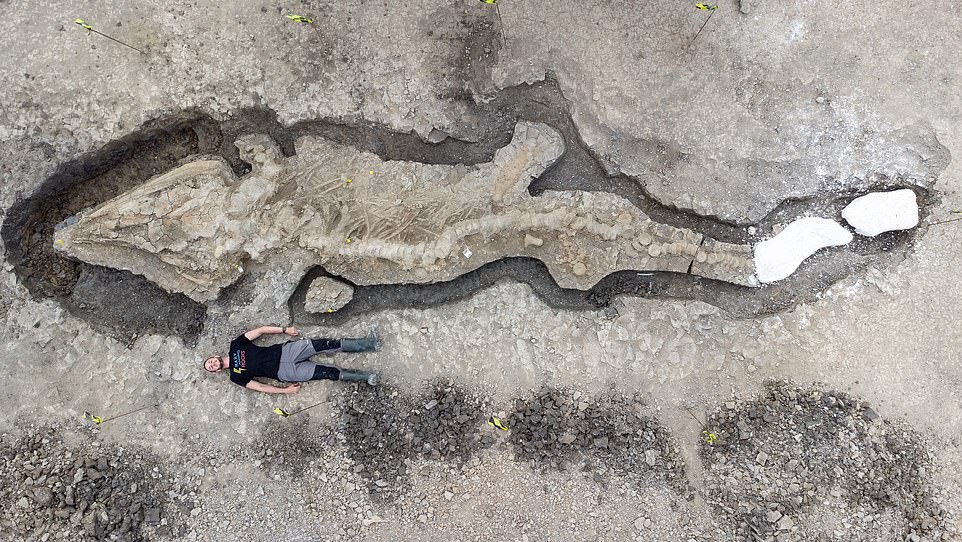 Historic: A giant ‘sea dragon’ discovered in the Midlands by wildlife trust worker Joe Davis (pictured with the skeleton) has been hailed as one of the greatest finds in British fossil history 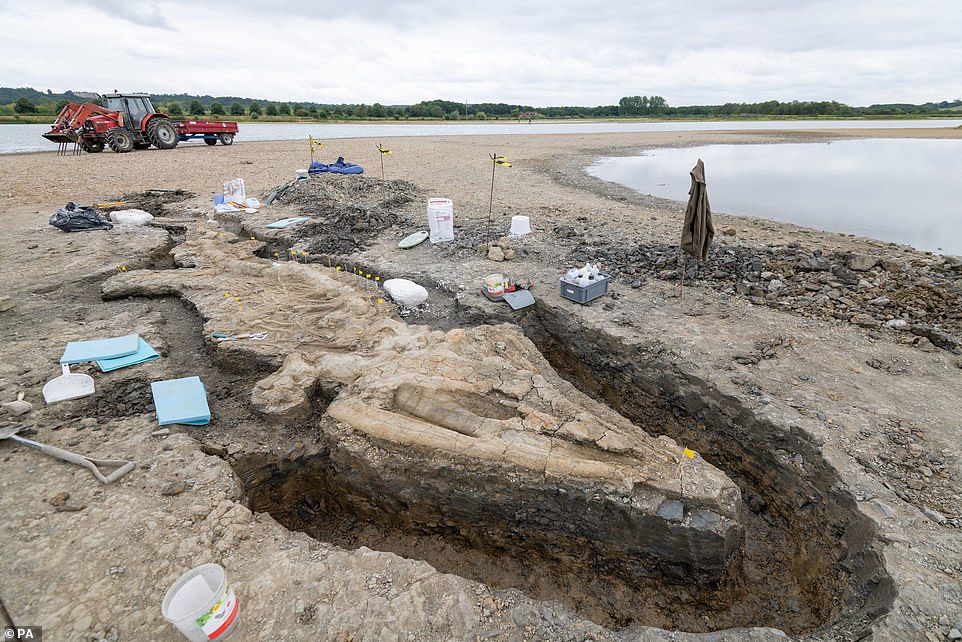 The first ichthyosaurs (pictured) were discovered by palaeontologist Mary Anning in the 19th century. They are often called ‘sea dragons’ because of the size of their teeth and eyes

The ichthyosaur is believed to be a species called Temnodontosaurus trigonodon. But if it is found to be a new species, it could be named after Mr Davis.

Dr Dean Lomax, a world expert on ichthyosaurs from the University of Manchester who spent 14 days excavating the fossil, hailed it as ‘one of the greatest finds in British palaeontological history’.

He said: ‘Despite the many ichthyosaur fossils found in Britain, it is remarkable to think that the Rutland ichthyosaur is the largest skeleton ever found in the UK.

‘It is a truly unprecedented discovery and one of the greatest finds in British palaeontological history.’

Ichthyosaurs, which were marine reptiles, first appeared around 250 million years ago and went extinct 90 million years ago, varying in size from one to more than 25 metres in length and resembling dolphins in general body shape.

The remains were dug out by a team of expert palaeontologists from around the UK in August and September.

Two incomplete and much smaller ichthyosaurs were found during the initial construction of Rutland Water in the 1970s. However, the latest discovery is the first complete skeleton. 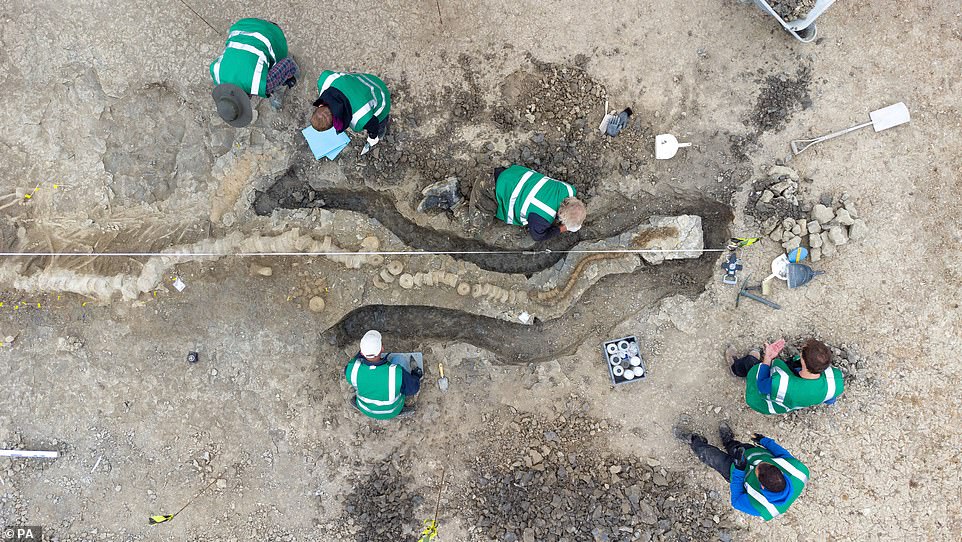 Pictured: team of experts working on the Ichthyosaur skeleton at Rutland Nature Reserve 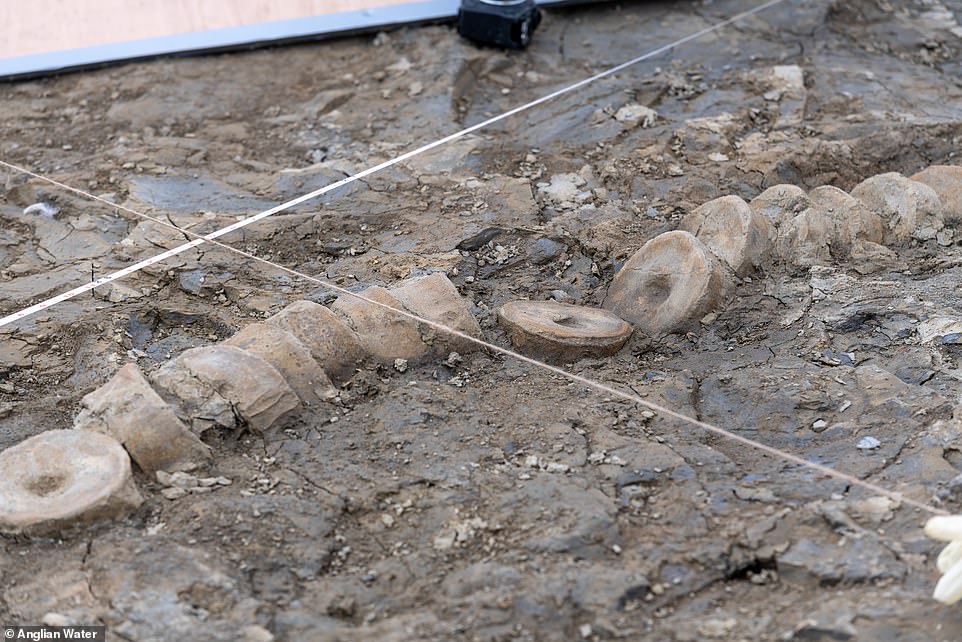 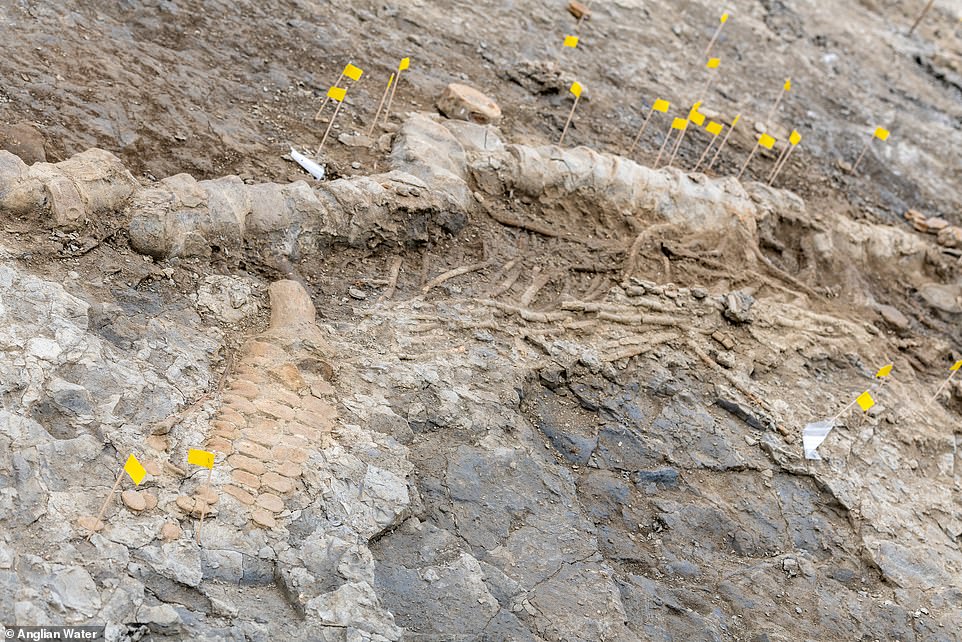 ‘The find has been absolutely fascinating and a real career highlight,’ said Mr Davis. ‘It’s great to learn so much from the discovery and to think that this amazing creature was once swimming in seas above us’ Pictured: the T. trigonodon fossil, showing the spine and flipper 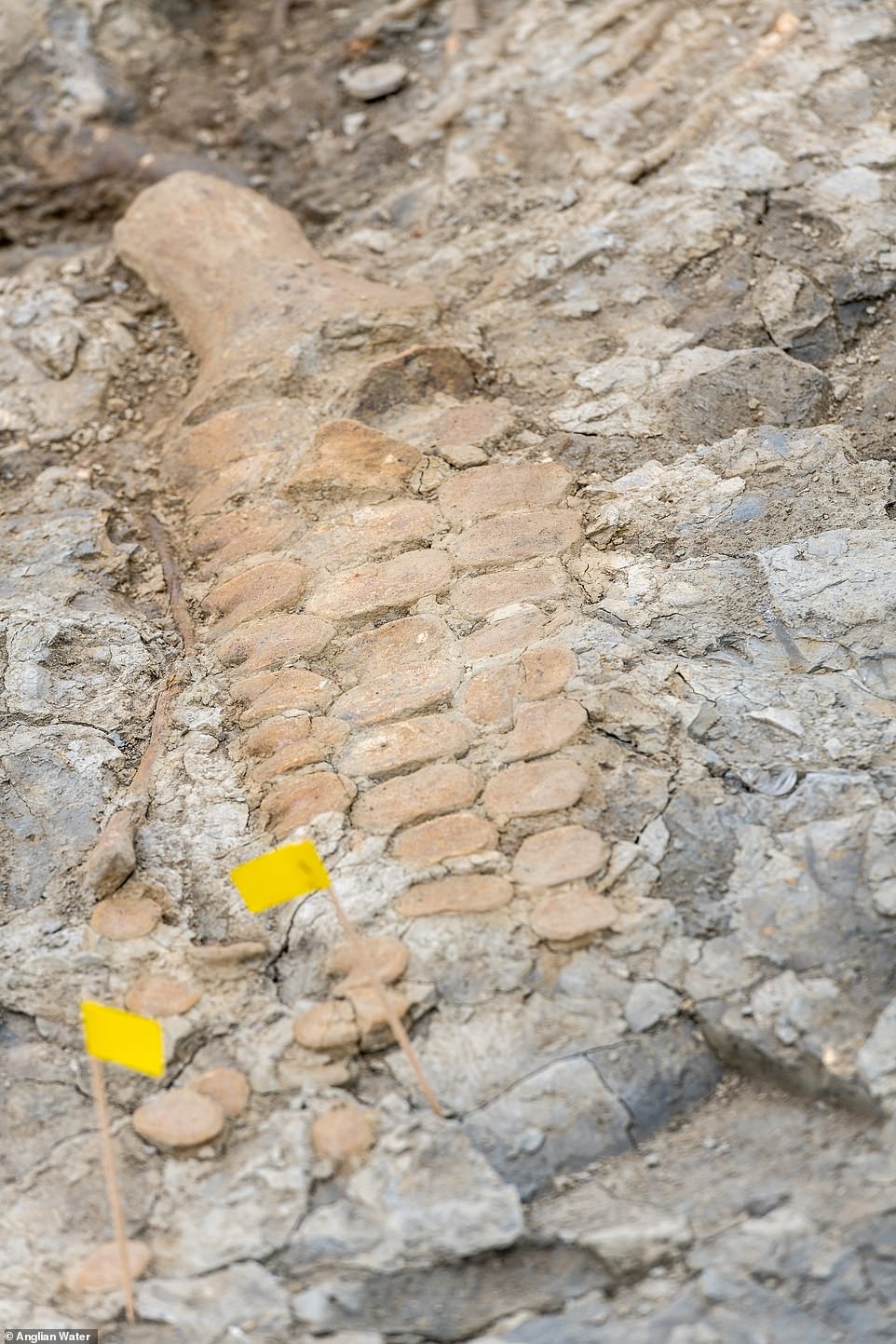 ‘Now, once again, Rutland Water is a haven for wetland wildlife — albeit on a smaller scale!,’ Mr Davis added. Pictured: a close-up of the T. trigonodon fossil, showing the bones of the flipper 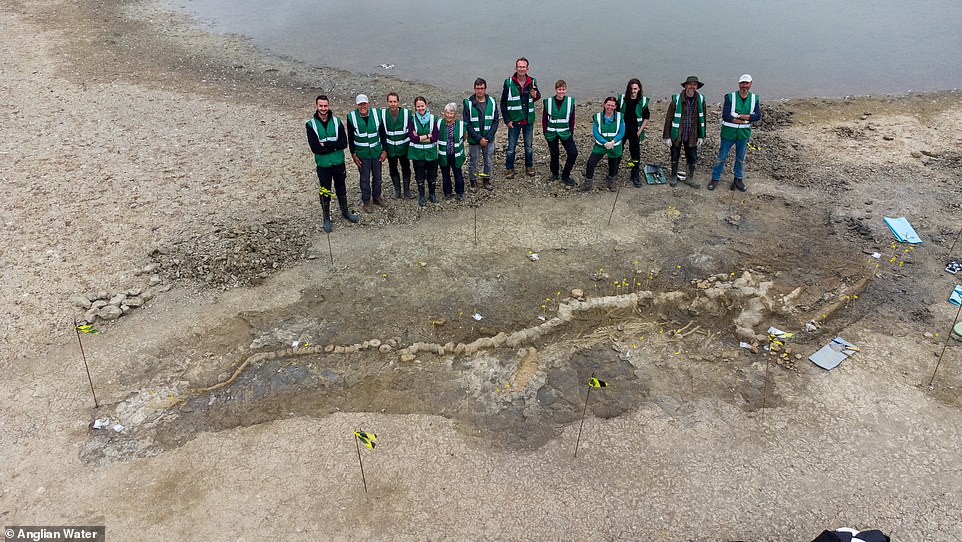 The find (pictured) ‘is a truly unprecedented discovery and one of the greatest finds in British palaeontological history,’ Dr Lomax concluded

The story of the Rutland Sea Dragon will feature on the episode of BBC Two’s ‘ Digging for Britain ‘ programme airing on Tuesday, January 11th. Pictured: a 3D model of the specimen

After being discovered in February last year the new specimen was removed in August so as not to disrupt the birds at the nature reserve.

Dr Mark Evans of the British Antarctic Survey said: ‘I’ve been studying the Jurassic fossil reptiles of Rutland and Leicestershire for over 20 years.

‘When I first saw the initial exposure of the specimen with Joe Davis I could tell that it was the largest ichthyosaur known from either county.

‘However, it was only after our exploratory dig that we realised that it was practically complete to the tip of the tail.’

He added: ‘It’s a highly significant discovery both nationally and internationally but also of huge importance to the people of Rutland and the surrounding area.’

Nigel Larkin, a specialist palaeontological conservator, said: ‘It’s not often you are responsible for safely lifting a very important but very fragile fossil weighing that much. 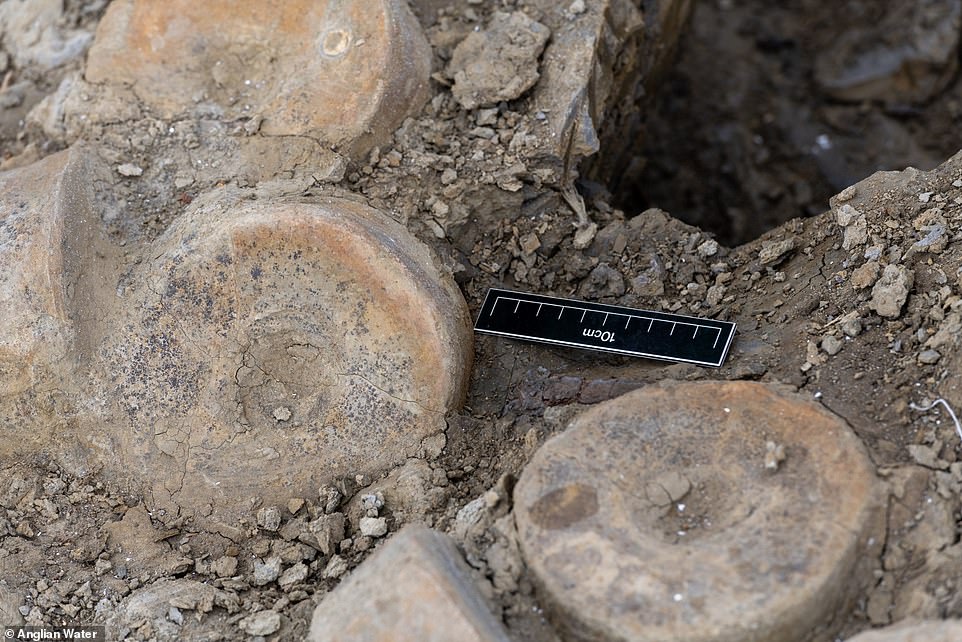 The fossil — whose skull alone was 6.6 feet (2 metres) -long and weighed one tonne — was unearthed between August–September by palaeontologists led by Dean Lomax of the University of Manchester and Nigel Larkin of Reading University. Pictured: vertebrae 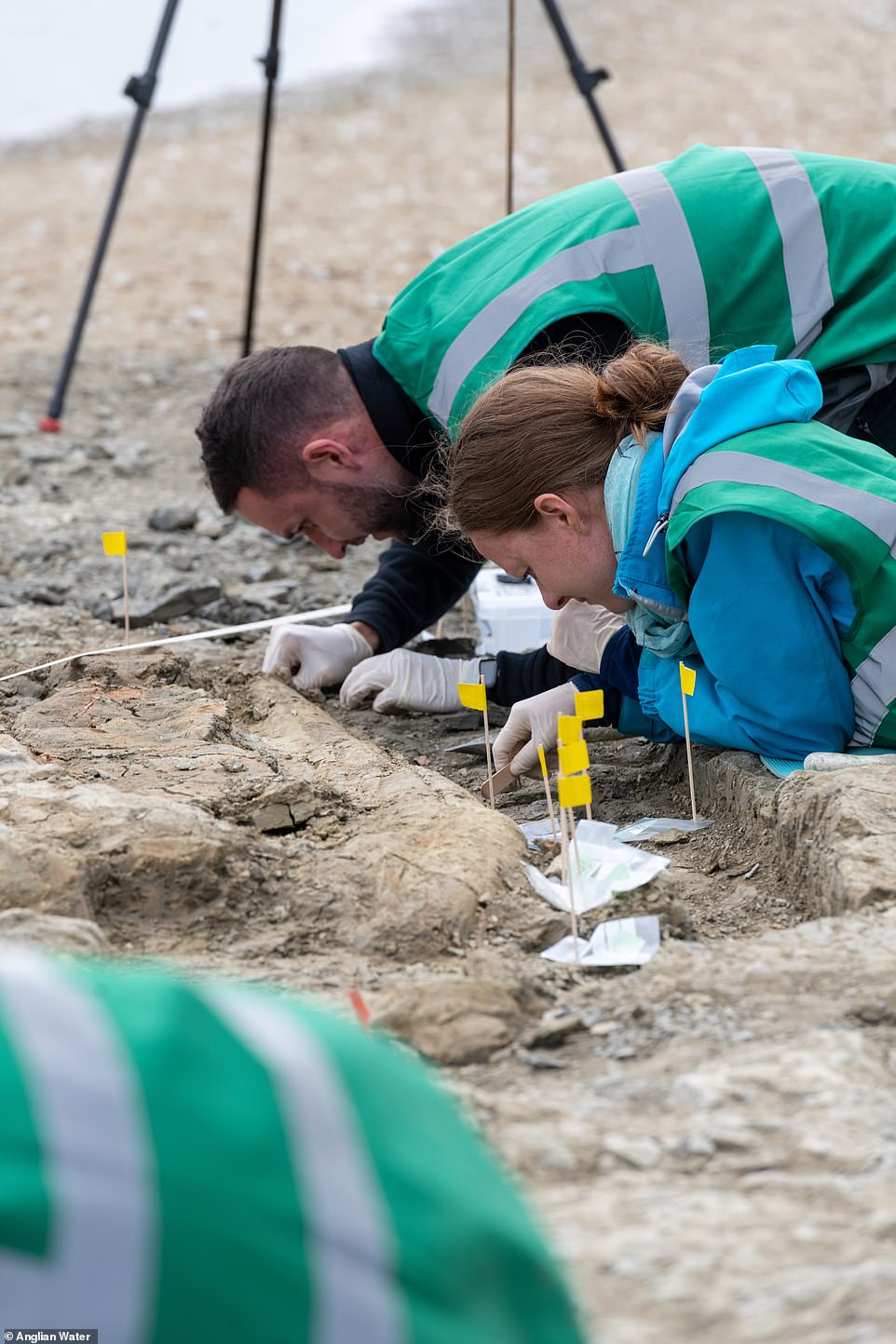 ‘It was an honour to lead the excavation, said Dr Lomax, who is an expert on ichthyosaurs and has described five new species in the course of his research 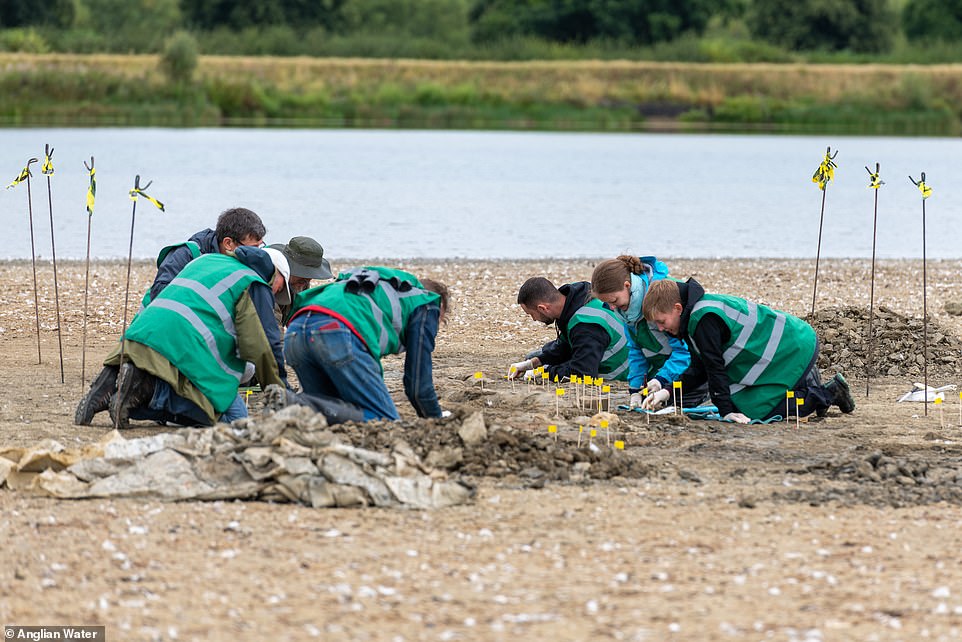 ‘Despite the many ichthyosaur fossils found in Britain, it is remarkable to think that the Rutland ichthyosaur is the largest skeleton ever found in the UK,’ said Dr Lomax 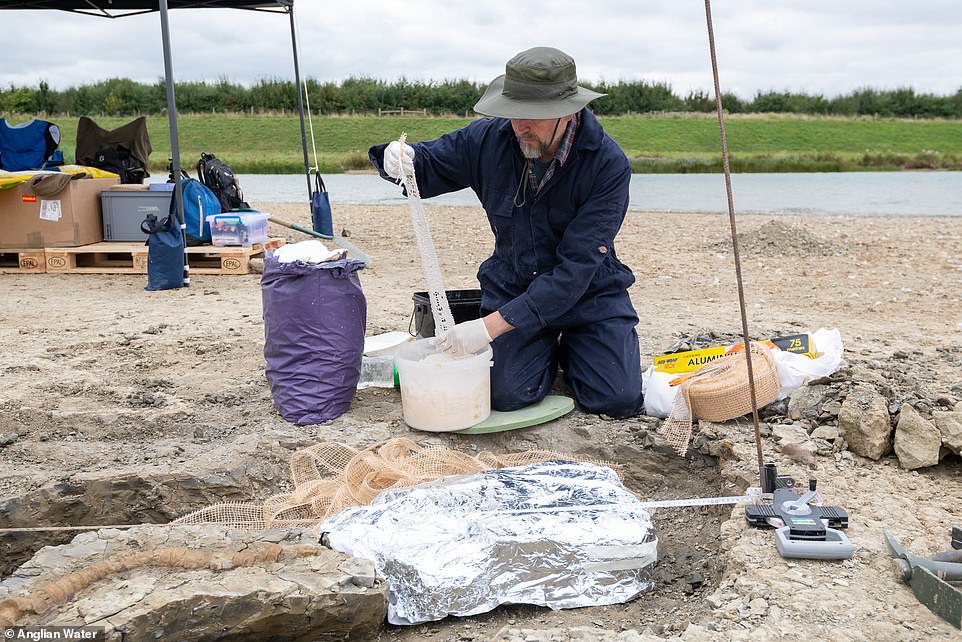 ‘The block containing the massive 2-metre-long skull weighs just under a tonne, comprising the fossil, the Jurassic clay in which it lies, and the encasing plaster of Paris and wooden splints,’ said palaeontologist Nigel Larkin 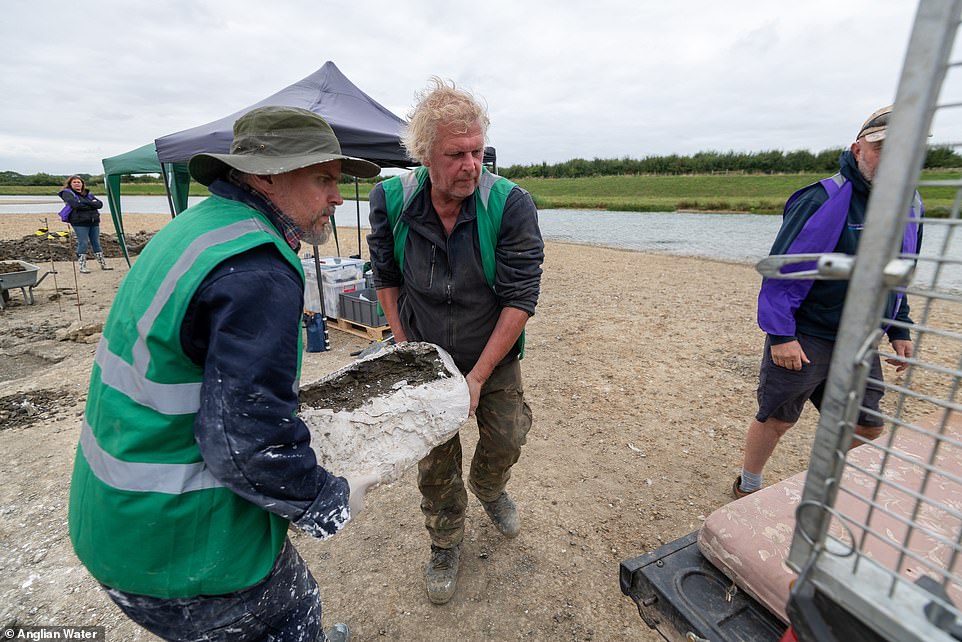 ‘It’s not often you are responsible for safely lifting a very important but very fragile fossil weighing that much. It is a responsibility, but I love a challenge,’ add Mr Larkin 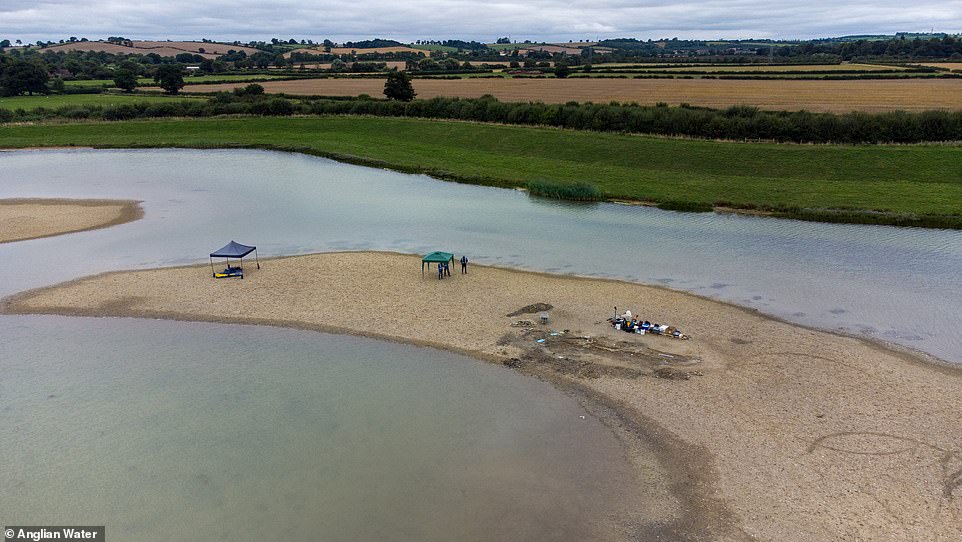 This is not the first ichthyosaur specimen to have been found at the Rutland Water Nature Reserve — with two smaller, partially complete fossil skeletons having been found during the construction of the reservoir back in the 1970s. Pictured: the latest excavation at the site 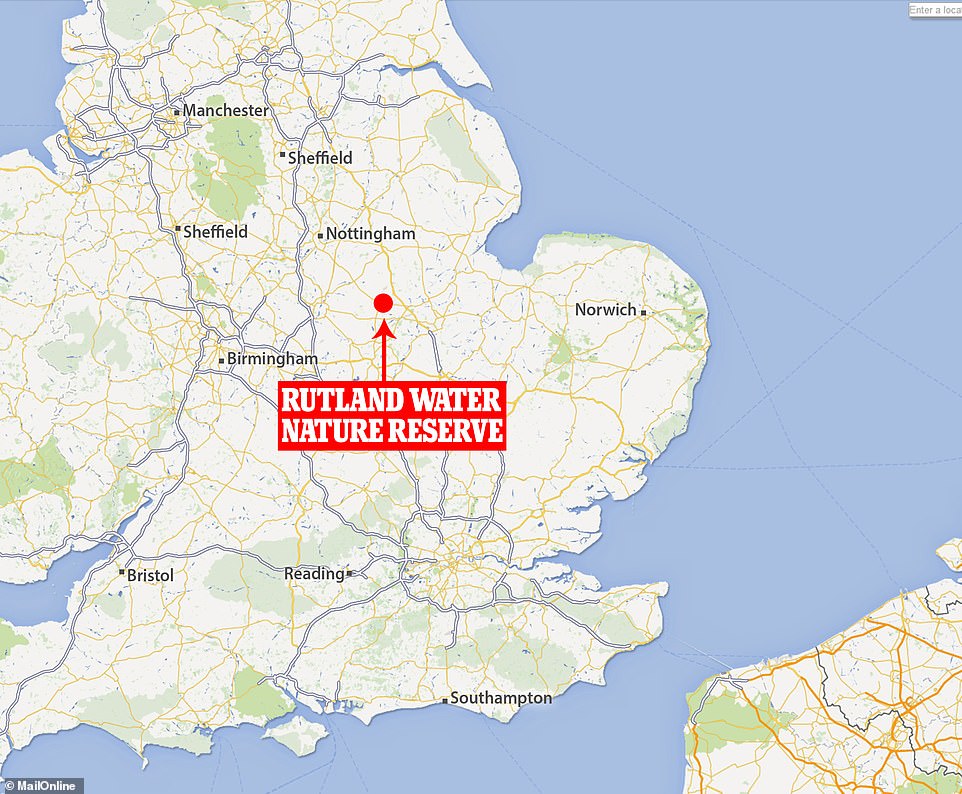 ‘Rutland Water has a long list of previous, fascinating archaeological and palaeontological discoveries, but none more exciting than this,’ said Anglian Water CEO Peter Simpson

‘It is a responsibility, but I love a challenge. It was a very complex operation to uncover, record, and collect this important specimen safely.’

The find comes amid a flurry of interest in the reptiles, which are nicknamed sea dragons because of their large teeth and eyes.

The first ichthyosaurs were discovered by fossil hunter and palaeontologist Mary Anning in the early 19th century.

Anning uncovered the first ichthyosaur known to science aged 12 and was the subject of Ammonite, a 2020 film starring Kate Winslet.

The excavation will feature on BBC2’s Digging For Britain tomorrow at 8pm.

Ichthyosaurs were a highly successful group of sea-going reptiles that became extinct around 90 million years ago.

Often misidentified as swimming dinosaurs, these reptiles appeared before the first dinosaurs had emerged.

They evolved from an as-yet unidentified land reptile that moved back into the water.

The huge animals, which remained at the top of the food chain for millions of years, developed a streamlined, fish-like form built for speed.

Scientists calculate that one species had a cruising speed of 22 mph (36 kph).

The largest species of ichthyosaur is thought to have grown to over 20 metres (65 ft) in length.

The largest complete ichthyologists fossil ever discovered, at 11 feet (3.5 m), was found to have a foetus still inside its womb.

Scientists said in August 2017 that the incomplete embryo was less than seven centimetres (2.7 inches) long and consisted of preserved vertebrae, a forefin, ribs and a few other bones.

There was evidence the foetus was still developing in the womb when it died.

The find added to evidence that ichthyosaurs gave birth to live young, unlike egg-laying dinosaurs.