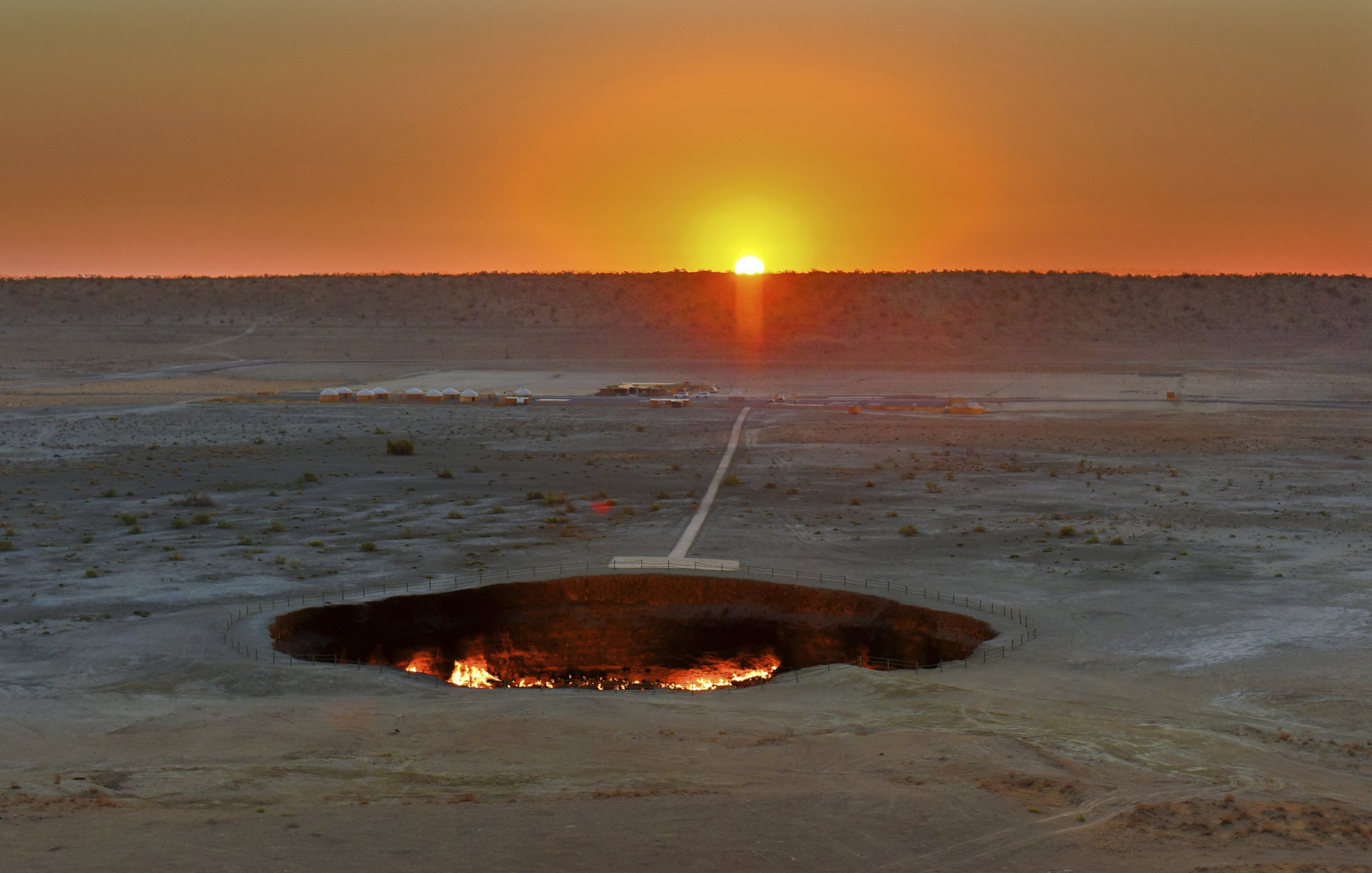 A deep chasm in the ground that’s been burning since the 1970s is due to finally be extinguished.

Known as the ‘Gates of Hell’, the fiery sinkhole stretches 230-feet wide and is located in the Karakum Desert in Turkmenistan, about 150 miles north of the country’s capital, Ashgabat.

No-one really knows how it was created, but one of the popular theories is it was created in ’71 when Soviet scientists ignited it.

The rumour goes that the Soviets came across the area while they were searching for natural gas deposits in the desert.

During the search the upper layers of soil collapsed inwards – creating a 70-foot deep crater filled with dangerous gas.

Thinking that the best way to get rid of the gas was to ignite it, the Soviets did just that – reckoning it’d burn itself out in a couple of weeks.

51 years later, it’s still going strong. In fact, the crater is permanently on fire and can be seen for miles around.

But is it about to finally be sealed up?

Gurbanguly Berdimuhamedov, the president of the reclusive nation has ordered his scientists to find a way to close up the hole for good.

As well as the incessant burning, the Gates of Hell has been spewing out methane and other noxious gases for decades and the health of locals has become a concern.

Interestingly, the government of Turkmenistan has tried to extinguish the flames before.

In 2010, Mr Berdymukhamedov ordered experts to put it out, but the ‘Mouth of Hell’ could not be made to stop burning.

Three years later, the Turkmen leader declared the area surrounding the fiery crater a natural reserve, turning it into a tourist trap. Thousands of people journey to visit it every year.

Berdymukhamedov even filmed a video of himself in a rally car in 2019 doing donuts around the crater to disprove rumours of his death.

But now it appears the 64-year-old autocrat has changed his mind and has had enough of Turkmenistan’s most popular tourist attraction.

‘We are creating – and will continue to create – all necessary conditions for the development of the colossal hydrocarbon resources of our independent Motherland, in the interests of our people,’ he said, explaining his decision to stop the inferno.

Turkmenistan’s ministers have been ordered by Berdimuhamedov – who has reigned over the country for 16 years – to find experts from anywhere in the word to help shut the Gates of Hell for good.

Can it be done? We’ll all have to wait and see.