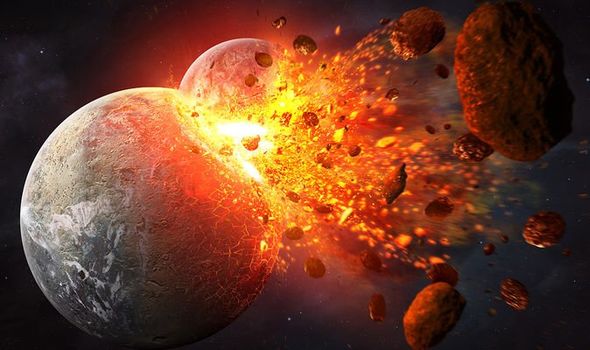 Possible remnants of early Earth sitting near the planet’s core could be left over from a collision with another planet 4.5 billion years ago. The discovery of the layer of rock provides further evidence for the theory that early in Earth’s forming another planet crashed into it, with the debris creating the moon.

Researchers at the University of Utah discovered layers of matter deep within the Earth’s mantle.

Surya Pachhai, who worked on the study, said the layering could have been created after a planet roughly the size of Mars crashed into Earth.

The findings lend weight to the hypothesis that a Mars-sized ancient planet – dubbed Theia by scientists – was what helped form the world we live on now.

Dr Pachhai said researchers believe that as a result of the collision, “a large body of molten material, known as a magma ocean, formed”.

The “magma ocean” would have cooled down over millennia, with dense materials sinking to the bottom of the mantle, according to the study.

The layers discovered could show areas where molten rock has still not mixed together after billions of years of convection currents – movement caused by heat the Earth’s core emits.

These ultra-low velocity zones allowed researchers to peer back into the planet’s origins.

Dr Pachhai said: “The physical properties of ultra-low velocity zones are linked to their origin, which in turn provides important information about the thermal and chemical status, evolution and dynamics of Earth’s lowermost mantle – an essential part of mantle convection that drives plate tectonics.

“The primary and most surprising finding is that the ultra-low velocity zones are not homogenous but contain strong heterogeneities [structural and compositional variations] within them.

“This finding changes our view on the origin and dynamics of ultra-low velocity zones.

“We found that this type of ultra-low velocity zone can be explained by chemical heterogeneities created at the very beginning of the Earth’s history and that they are still not well mixed after 4.5 billion years of mantle convection.”

Researchers studied the zones beneath the Coral Sea, between Australia and New Zealand.

This location offered a clearer picture of the zones as it is prone to frequent earthquakes, which produce seismic waves.

These waves radiate deeper into the Earth’s surface, and can be measured.

The measurements can then be used to understand how the waves move within each layer of the surface, revealing information about the density and make-up of the planet’s structure.

Theia was named after the titaness in Greek mythology who mothered Selene, the goddess of the moon.

In 2020, scientists at the University of New Mexico studied oxygen levels in rocks brought back from the moon.

They found that rocks from the centre of the moon had the most variation in oxygen levels.

This suggests that the centre of the moon would have been made mostly of debris from Theia.

The findings support computer modelling of the collision, which show that the moon would have been mainly comprised of the remnants of Theia.