New photos offer a fascinating glimpse into the unseen alien-like world of microscopic plankton – the diverse collection of tiny organisms found in water and the air.

Dutch photographer Jan van IJken has published his collection of plankton imagery, taken from puddles, lakes and seas in the Netherlands, as part of a film and photo project called ‘Planktonium’.

‘Plankton’ is a Greek term meaning ‘errant’ in reference to their existence in a ‘drifting state’, as they’re unable to propel themselves against a current or wind.

This compares with ‘Nekton’ (‘to swim’), actively swimming organisms such as fish, squid, octopus, sharks and marine mammals. 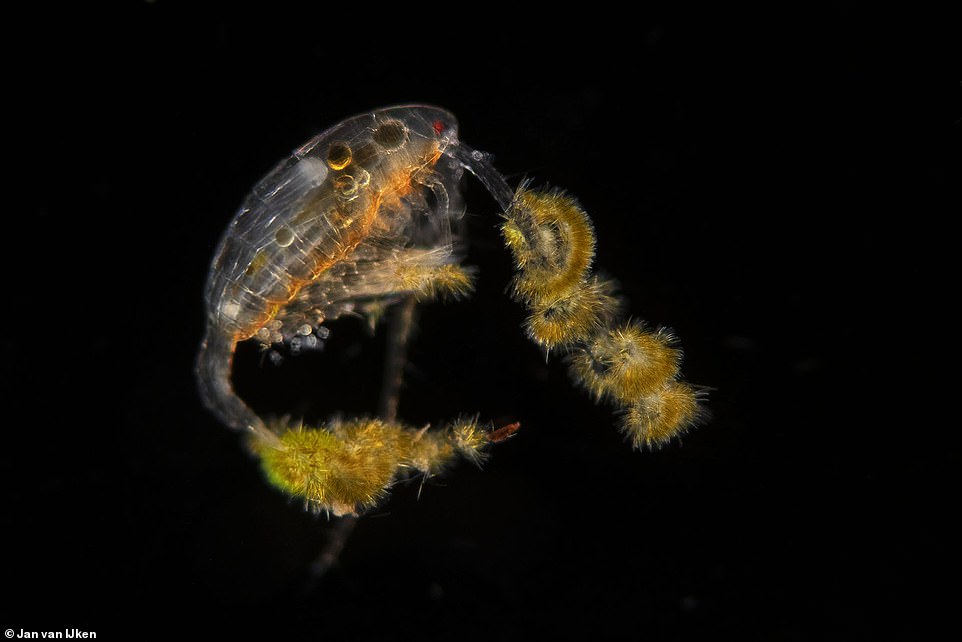 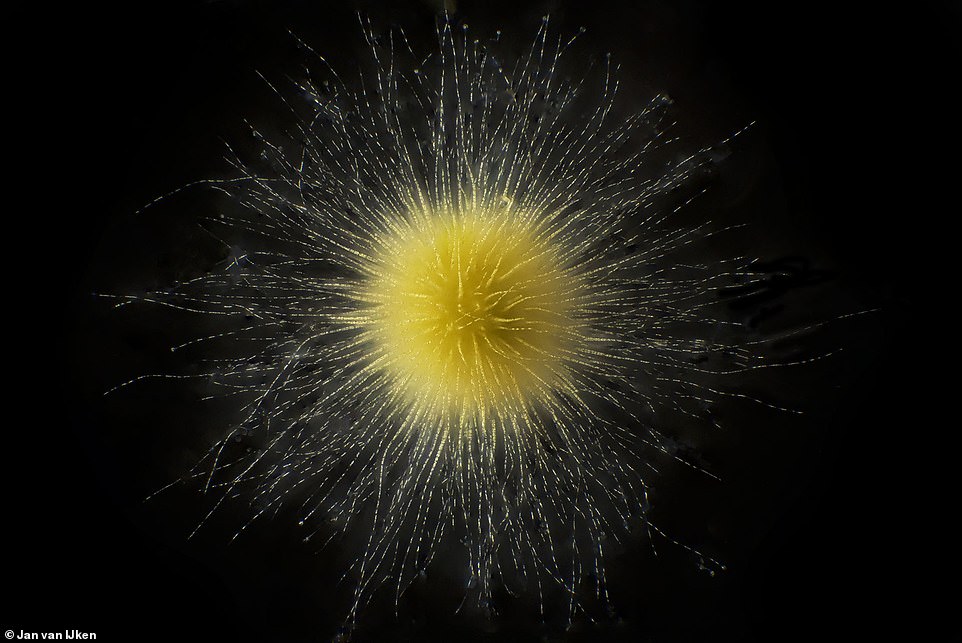 Pictured is Gloeotrichia, a large (around 2 mm) colonial genus of cyanobacteria. Cyanobacteria a division of microorganisms that are related to the bacteria but are capable of photosynthesis

‘These stunningly beautiful, very diverse and numerous organisms are unknown to most of us because they are invisible to the naked eye,’ van IJken’s website reads.

‘However, they are wandering beneath the surface of all waters around us and they are of vital importance for all life on Earth.’

Plankton play an important role in the production of oxygen, the aquatic food web and the carbon life cycle.

According to the US’s National Oceanic and Atmospheric Administration, scientists estimate that 50 per cent to 80 per cent of the oxygen production on Earth comes from the ocean, mostly from oceanic plankton. 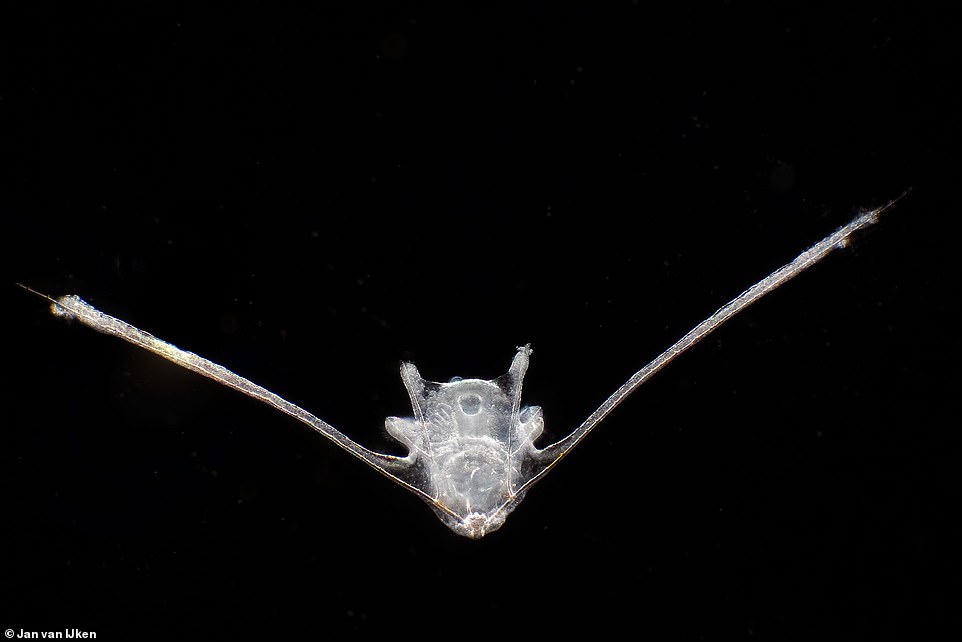 Pictured is echinoderm larva. An echinoderm is any member of the phylum Echinodermata of marine animals, characterised by a hard, spiny covering or skin

However, Van IJken warns that plankton are threatened by climate change, global warming and acidification of the oceans.

As well as many photos on the website, van IJken has created a short film of the plankton in motion that’s scored by Norwegian artist Jana Winderen.

Planktonium has been acquired by Museum De Lakenhal in the Dutch city of Leiden, where the film will be screened from January 22 as a part of Leiden European City of Science 2022. 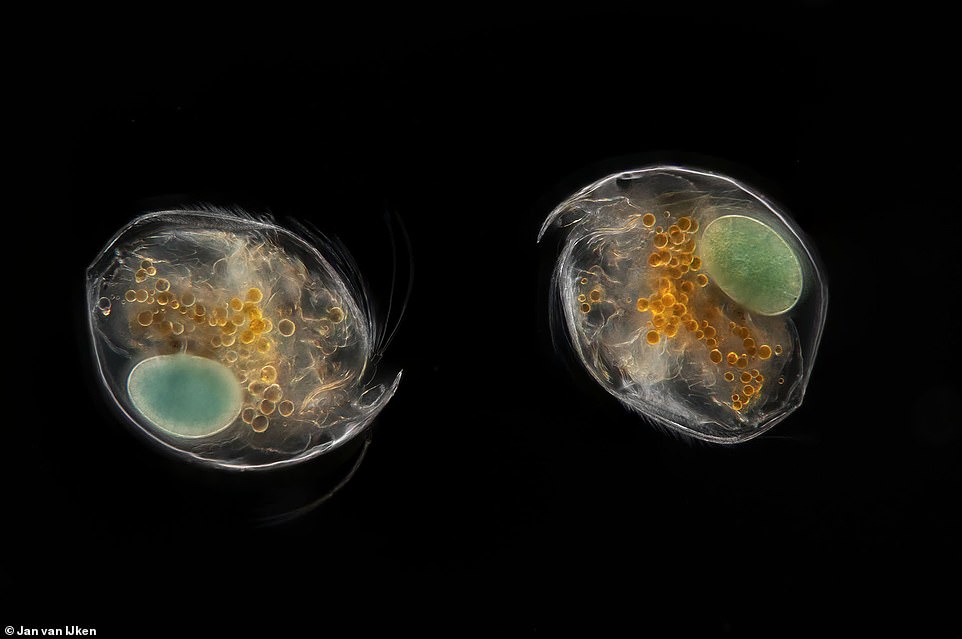 Waterfleas carrying eggs. Waterfleas are called as such because their saltatory swimming style resembles the movements of fleas 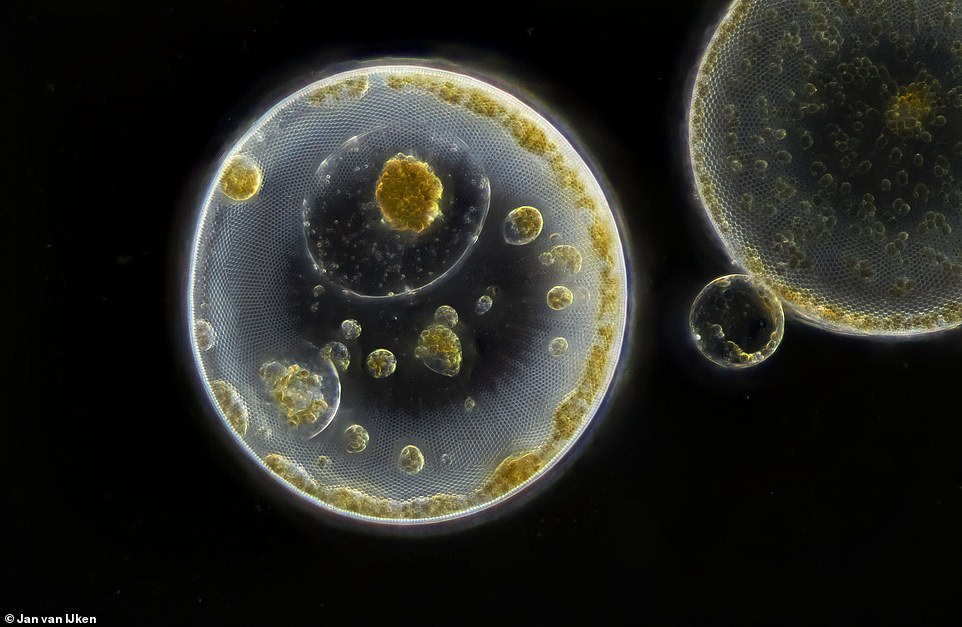 Pictured, are diatoms (single-celled algae). Jan van IJken says: ‘These stunningly beautiful, diverse and numerous organisms are invisible to the naked eye, but are drifting in every water around us’

PLANKTON ARE ‘MARINE DRIFTERS’ – ORGANISMS CARRIED ALONG BY TIDES AND CURRENTS

The word ‘plankton’ comes from the Greek for ‘drifter’ or ‘wanderer’. An organism is considered plankton if it is carried by tides and currents, and cannot swim well enough to move against these forces.

Some plankton drift this way for their entire life cycle. Others are only classified as plankton when they are young, but they eventually grow large enough to swim against the currents.

Plankton are usually microscopic, often less than one inch in length, but they also include larger species like some crustaceans and jellyfish. Scientists classify plankton in several ways, including by size, type, and how long they spend drifting.

But the most basic categories divide plankton into two groups: phytoplankton (plants) and zooplankton (animals).

Phytoplankton are microscopic plants, but they play a huge role in the marine food web.

Like plants on land, phytoplankton perform photosynthesis to convert the sun’s rays into energy to support them, and they take in carbon dioxide and produce oxygen.

Because they need the sun’s energy, phytoplankton are found near the water’s surface.

Read more: What are plankton? by the National Oceanic and Atmospheric Administration